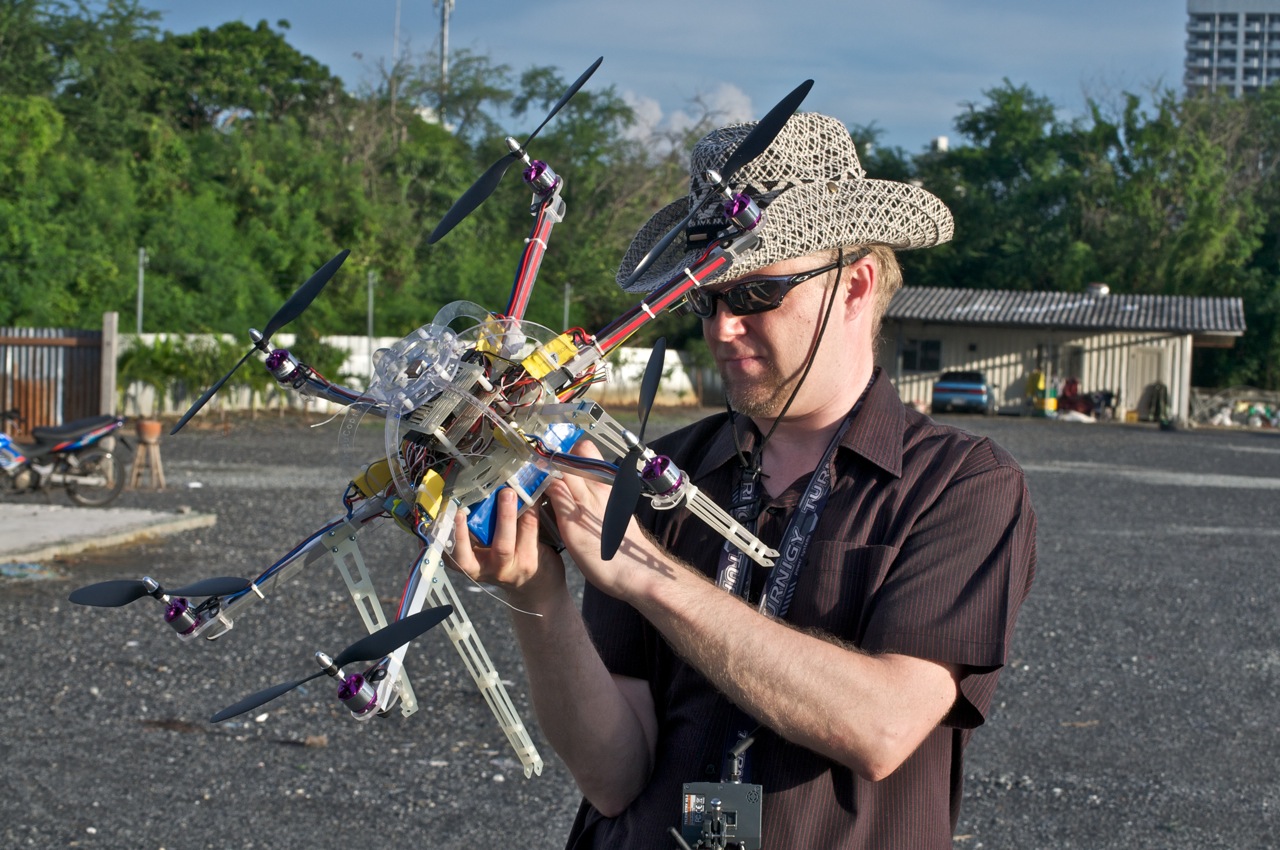 Today's Meet the Developers profile is Jani Hirvinen, who is one of the leaders of the ArduCopter project. Jani is one of our core team members, is always on the Sunday night dev call and is constantly testing new code, suggesting improvments and extending the platform to new airframes and configurations. He's got boundless energy and seems to always be working!

One of his most impressive contributions was the hardware design for the official ArduCopter frames, motors and whole concept including firmwares, which he did almost single-handedly and really accelerated the project. Jani's one of the DIY Drones entrepreneurial sucess stories, too. He got so into the project that he made it his job, and now runs jDrones, which is both a manufacturing operation and retail store, full time out of Bangkok. Background: After working a long time with AeroQuad and many other multicopters, the move to ArduCopter project was convenient. When DIY Drones wanted to move towards multirotors and ArduCopter was born, I joined to ArduCopter dev team as one of it's original members and we created well known ArduCopter frames and kits as they are known these days.

First we created basic ArduCopter software as a merge from AeroQuad and Joses codebases. We quickly saw that it was not that path that we want to go so me and Jose created new architecture for ArduCopter and ArduCopterNG was born. ArduCopterNG was big step towards ArduPilot Mega code bases

Nowdays all my time goes on parts development, management issues, dealing out with all our suppliers, looking new and better parts to help you all our users out there, testing and crashing a lot on our products so our users not need to crash them :)

Personal History: Born in Helsinki, Finland 1969 to aviation full family as dad used to be Captain on Finnair and flight instructor, Naturally Mom had her flight licenses and flew often if had time from her car racing career. Started electronics on age of 4 and got my first computer on age of 6. Hobby airplanes came along age of 8. Having degrees on Mechanical Engineering and Computer Science. Last 20 years been running Global Internet service providers,  IT Training & Consult projects and working on high tech technology transfers between Finland and Thailand. Now living full time in land of smiles and working like crazy on jDrones and DIYDrones related projects.

Motto: There are no stupid questions... Learn something new every day, if not it's a boring day. (not fan of boring days)

Other hobbies: R/C Heli flying, Electronics, Occasional Paragliding, Sailplane flying, Ice Skating (yes in Bangkok... hey i'm from Finland). Among many other things if there are any free time left, which has not been the case lately.