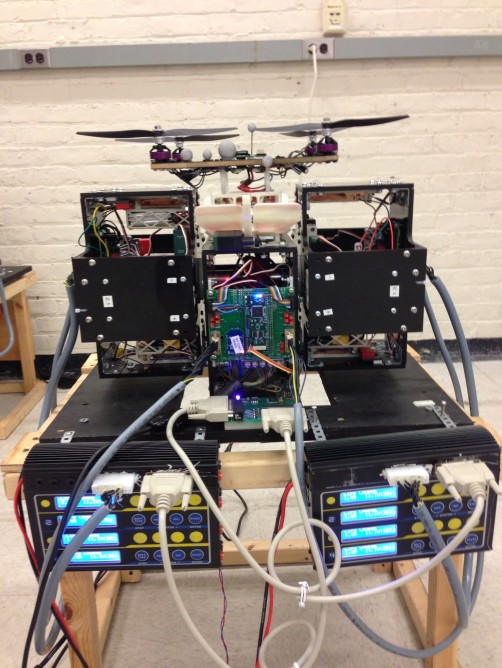 The prospect of delivery drones brings with it a few notable issues. Beyond visions of colliding rotor blades and unsolicited package drops lies another problem: the huge amount of computational power needed to take into account real world uncertainties, such as strong winds, limited battery life and navigational errors, in order to provide a reliable delivery service. This has been the focus of new study from MIT, with a team of researchers devising a new algorithm said to massively reduce the level of computation required, enabling the drone to monitor its "health" in real time.

There was no shortage of skepticism when Amazon announced its plans forPrime Air last year. Ambitious though it may be, research efforts from MIT and others indicate that the world's largest e-tailer is not exactly flying solo in its bid to establish drones as the basis for a viable courier service.

"With something like package delivery, which needs to be done persistently over hours, you need to take into account the health of the system," says Ali-akbar Agha-mohammadi, a postdoc in MIT’s Department of Aeronautics and Astronautics. "Interestingly, in our simulations, we found that, even in harsh environments, out of 100 drones, we only had a few failures."

Agha-mohammadi and his team developed a two-step approach as a way of simplifying the computational processes performed by the drone. The first focused on vehicle-level planning, which involves the drone mapping its path off-line ahead of time. The second part relates to the vehicle's health planning, such as monitoring the condition of propellers, cameras and fuel levels on-the-fly.

In comparison to another technique for planning an autonomous vehicle's course called Markov Decision Process (MDP), the new approach is designed to significantly reduce the enormous amount of navigational outcomes which can arise from various factors, such as strong winds and errors in measurement. The team was able to narrow the number of outcomes down to a few that were most likely by having the drone map out the environment offline prior to departure. This frees up computational energy that can be put toward real-time monitoring.

"Imagine a huge tree of possibilities, and a large chunk of leaves collapses to one leaf, and you end up with maybe 10 leaves instead of a million leaves," Agha-mohammadi says. "Then you can … let this run offline for say, half an hour, and map a large environment, and accurately predict the collision and failure probabilities on different routes."

In testing the new algorithm, the team ran simulations where drones delivered several packages to various addresses. Needing to overcome differing wind conditions and limited fuel, the drones working with the two-part algorithm were better at preserving their health than the regular drones, autonomously re-routing to a refueling station, for example. While this led to a higher number diversions, over time, they delivered as many packages as non-health monitoring drones with far fewer breakdowns or failures.

This new found reliability could be integral to future drone delivery systems Agha-mohammadi claims, with an emphasis on preserving drone health potentially leading to a safer and more dependable service.

"We believe in the near future, in a lab setting, we can show what we’re gaining with this framework by delivering as many packages as we can while preserving health," he says. "Not only the drone, but the package might be important, and if you fail, it could be a big loss."

The team has now fitted electromagnets to drones, enabling them to pick up and drop off packages, with the intention of testing the route-planning approach in actual experiments. The team has also programmed the drones to land on custom-built recharge stations.

Agha-mohammadi will present the approach at the IEEE/RSJ International Conference on Intelligent Robots and Systems, being held in Chicago in September.

The team's research paper can be found here.