The mane requirement for Marcy 1 was always the most advanced flying thing known to man, hovering autonomously, showing POV synchronized to Evans Blue: The Darkness That Follows. 2 years after envisioning it, we finally got it working. It doesn't come out as well with the slow RPM as hoped.

For all its complexity, uploading the images in realtime & caching in RAM wasn't fast enough. All 58 images ended up being stored in flash, with the ground station sending indexes to show. There remains an option of realtime upload for testing.


You wouldn't believe how many problems kept cropping up with the choreographed POV.

The journey began with a new ground station, condensing camera control & radio in 1 CPU & getting rid of sonar. 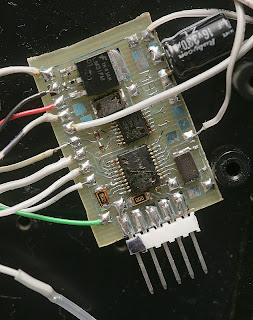 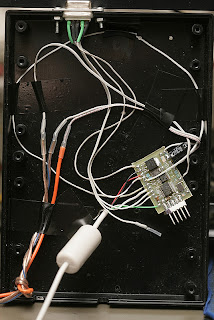 Then came getting rid of the camera board. 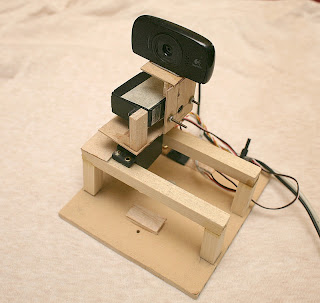 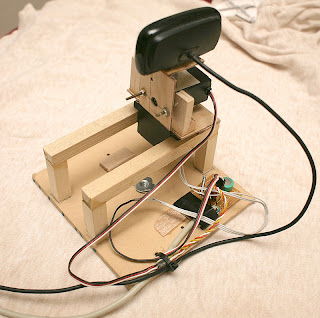 The camera turret finally got converted to USB power & PWM moved to the ground station & it didn't work.  USB doesn't have enough juice to power 2 servos.  It resets the device.

The next step was to RC filter the USB power, so it doesn't inrush too fast.  The problem was the pots in the servos need constant voltage to measure position.  When the motors kick in, they lower the RC filtered voltage & we get random walking as the pot voltage fluctuates. 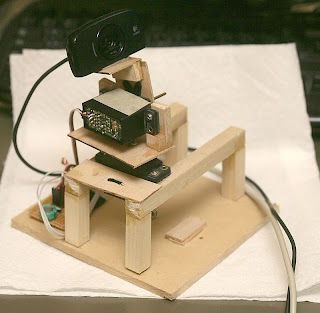 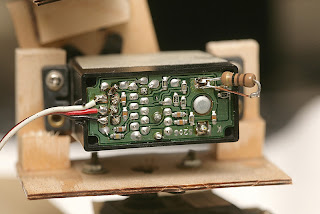 So it finally became a diabolical servo hack.  A 10ohm resistor in series with the motor got it in the USB limit without pulling down the pot voltage.

Unfortunately, the laptop USB port fell over.  Even that current limited servo configuration was too much.  This explains why the Kinect had such a tiny motor.  That was all USB could power.  It's amazing it managed to even power a fan.  We're back to hauling around a battery & worrying about draining it. 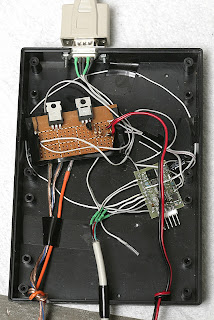 More hacking on the ground station got us a battery switch, so you don't need to worry about unplugging the battery. 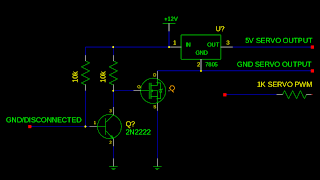 The easiest way to do it was some diabolical BJT hacking.  When USB is unplugged or the autopilot is off, the BJT pulls down the MOSFET gate to 0.  When the BJT base is connected to GND, it lets the MOSFET gate float to 12V.  The MOSFET connects the ground to the servos & voltage regulator.  The PIC couldn't get high enough to do it without the BJT.

BJT's have become the duct tape of electronics.  We went with GND switching because when Vdd is disconnected, the servos suck from the PWM.  Of course, when GND is floating, the servos sink current into the PWM.  You can't win without some more diabolical isolation of the PWM.

We ended up putting 1k resistors on the PWM.  It leaks 20mA of current, but not as much as running the servo microcontrollers. 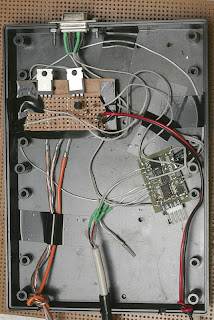 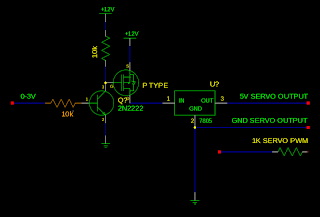 That still didn't work.   Another redesign of the servo power switch got rid of some new problems.  Turning off ground with an N MOSFET caused the USB driver to fail.  It's 1 of those unknown behaviors when current flows into the PWM pins while the microcontroller is unpowered.

Now, a P MOSFET switches off the 12V & ground is always ground.  There's outflow from the PWM pins when it's connected to USB, but no inflow when there is no power & no current leakage from the battery. 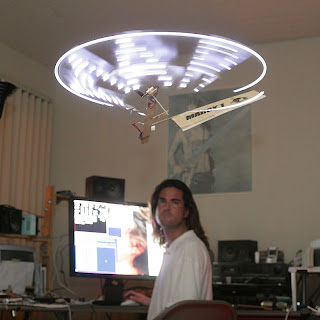 The mane thing missing is the RC transmitter.  It finally got replaced by keyboard input. 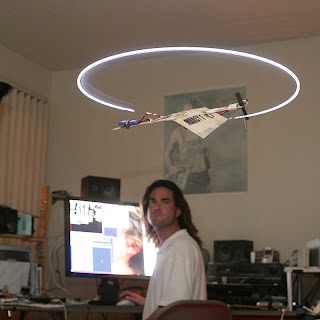 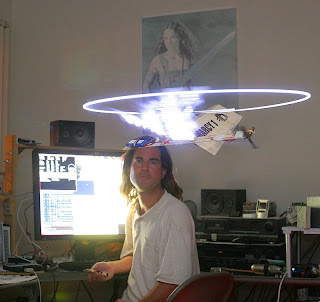 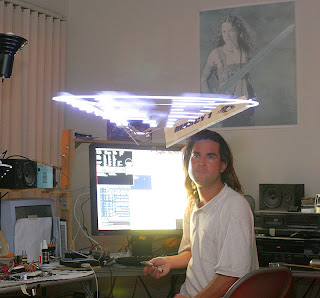 A few more bugs & the music choreography started.  You wouldn't believe how far away you were from doing what you thought would take a few days in 2010.  The RAM caching scheme initially proved not to be as hideously complex as feared.

Real important is the ability to simulate it in software, but even then, it takes lots & lots of flying to test view images.  Then you become aware just how reliable the flight controller is. 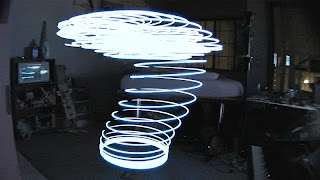 The wide angle lens made this shot possible. 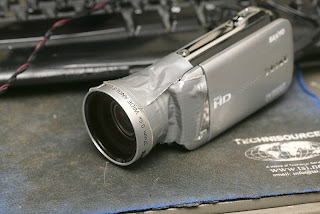 A video DSLR would be nice, but there are only 50 full-time jobs in the whole country: 40 of them at local Wal-Marts, the other 10 in industry with 7 of them at large corporations, and the remaining three jobs are at huge museums — and all of those 50 jobs are already taken.