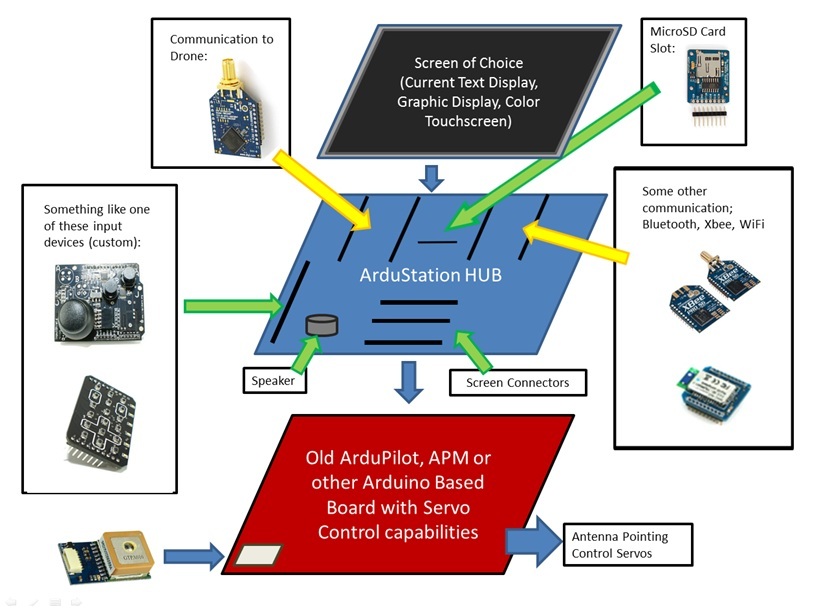 There have been multiple discussions in the threads of various ArduStation posts in the last few weeks about form, function, capabilities both in conjunction with and without a GCS or planner. I have joined in on some of those discussions and what came out of many of them is that we all have different approaches to what we want out of an ArduStation-like component. Some people want a simple mechanism to just decode the LAT/LON, calculate a direction and point the antenna. Some people want it to point the antenna and pass along the data stream via another communication protocol. Still others like having the screen and buttons to tune PIDs, etc. Some wanted the whole enchilada PLUS a touchscreen to do away with the old text screen and buttons...needless to say there was not a lot of consensus - so that got us talking and a modular format became a part of the discussion.

So what I would like to propose is a new project called the ArduStation HUB. A completely modular unit that will allow people to build upon it and add each component they require. So chime in, tell me what you think. Do we even need anything like this? Is my design brilliant? lunacy? Let's crowdsource the design and I wil get them built - if we come up with something truly awesome, perhaps we can get it added to the store.  I know MANY of you have been working on various versions of hardware / software etc.  Can we come up with the modular software to match?