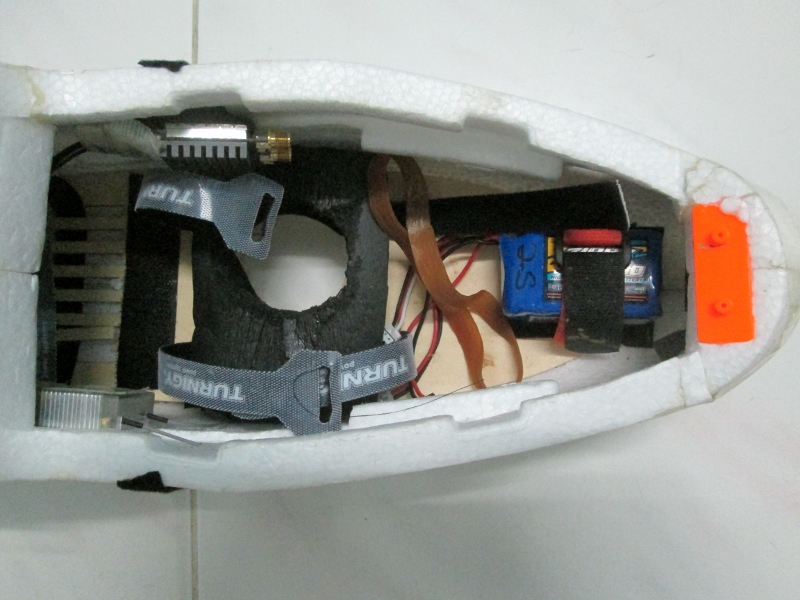 As Prof LianPin Khoo post an interesting 3D amination here and also here . Someone is interested to see more picture of the plane which capture those images.

I have a blog which show the basic info about the NewSkywalker. Now I have get it set up properly and adjust some APM parameter base on my previous Skywalker1900. I also have flown a few mission with it and quite happy with the performance and the ability of APM to hold proper grid line in windy condition. During the test flight, I also had an unplan " durability" test where it fall from about 30 meter because of the receiver battery voltage went low. This is my own fault because I forgot to get it fully charge. I actually did check with the voltage before flight and it show sufficient. It survive the crash with some crack in the nose area and a wings broken about 10 inches from wing tip. Some EPO glue and fiberglass tape had it repair in no time and it have flown another few mission subsequently.

The only modification I made is cut a hole as shown in the picture for camera. Now my camera can fix inside the fuselage nicely with proper orientation. I'll put the camera nearer to the nose for my next Newskywalker because with the current location, I had to add about 160 gram of weight in the nose to balance it. The vibration dampen foam is a piece of air conditional copper pipe insulator. This idea is given by Prof LianPin Khoo and it work. I also cut a door at the left fuselage similar to old version skywalker for ease of access to the battery and other electronic on board

With the set up as describe in my previous blog, I can have about 30 minutes time with 40 % throttle cruise setting. At the end of the flight, I still had about 1000 mah reserve in the battery. For my typical aerial mapping mission. I'll normally fly at 200 meter altitude. In 20 to 30 minutes it'll cover 200 Ha of land with 60 % overlapping area.