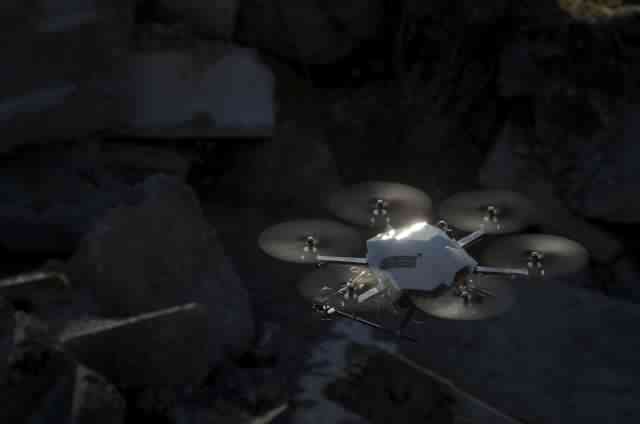 Cameras for navigation and mapping

One innovation of the flying robots is that the devices are able to stabilise and locate their position using only the cameras and a miniature computer installed on board, without the need of a connection to the ground station. The flight movements of the helicopter are calculated in real time from the camera imag-es. A flight control unit compares these with the required values and corrects them in case of deviations.

This technology, developed in the Autonomous Systems Laboratory at ETH Zurich, has two weighty advantages compared with GPS-based flying robots. First, it works both in the open air and in enclosed spaces. The second is that the flying robots can navigate where GPS fails; for example, due to the density of buildings. The camera-based technology allows for a more accurate positioning of the aircraft than is possible with GPS, explains the project coordinator, Davide Scaramuzza. Depending on the environment, GPS errors can be as great as 70 metres — much too imprecise when several flying robots are in close proximity to each other in the air.

One of the three on-board cameras provides data for a flight control unit, and the other two are used for 3D modelling. Via WiFi, the on-board computer transmits the recorded images to a computer on the ground, which then creates a 3D map of the overflown terrain. The 3D map shows obstacles for the flying robots, and it is possible to use it to calculate, for example, the best position for the complete surveillance of the area. The technology of the 3D modelling was developed by the Institute for Visual Computing at ETH Zurich.

Future use in disaster relief missions

One of the disadvantages of the conventional construction style of flying robots concerns their weight and thirst for energy. This is why it was one of the goals of sFly to develop more efficient algorithms that require less processing power, while also increasing the computing power of the flying devices. In collaboration with Ascending Technologies, a Munich-based company that specialises in flying robots, a flying robot with six rotors was developed that weighs only 1,500 grams, including three on-board cameras and a miniature computer.

The new micro helicopters have a diameter of about 50 centimetres. They are designed to manoeuvre in tight or even enclosed spaces, and to detect and fly around any obstacle. Possible uses could include protection or rescue missions. They are ideal for flying over disaster areas and giving a picture of the situation from the air or locating victims. “This is a research project that above all aims to explore the technical possibilities. However, we can well imagine that the flying robots developed in the sFly project could be an important aid for rescue teams in disaster relief missions in the not too distant future,” says Roland Siegwart, head of the Laboratory for Autonomous Systems