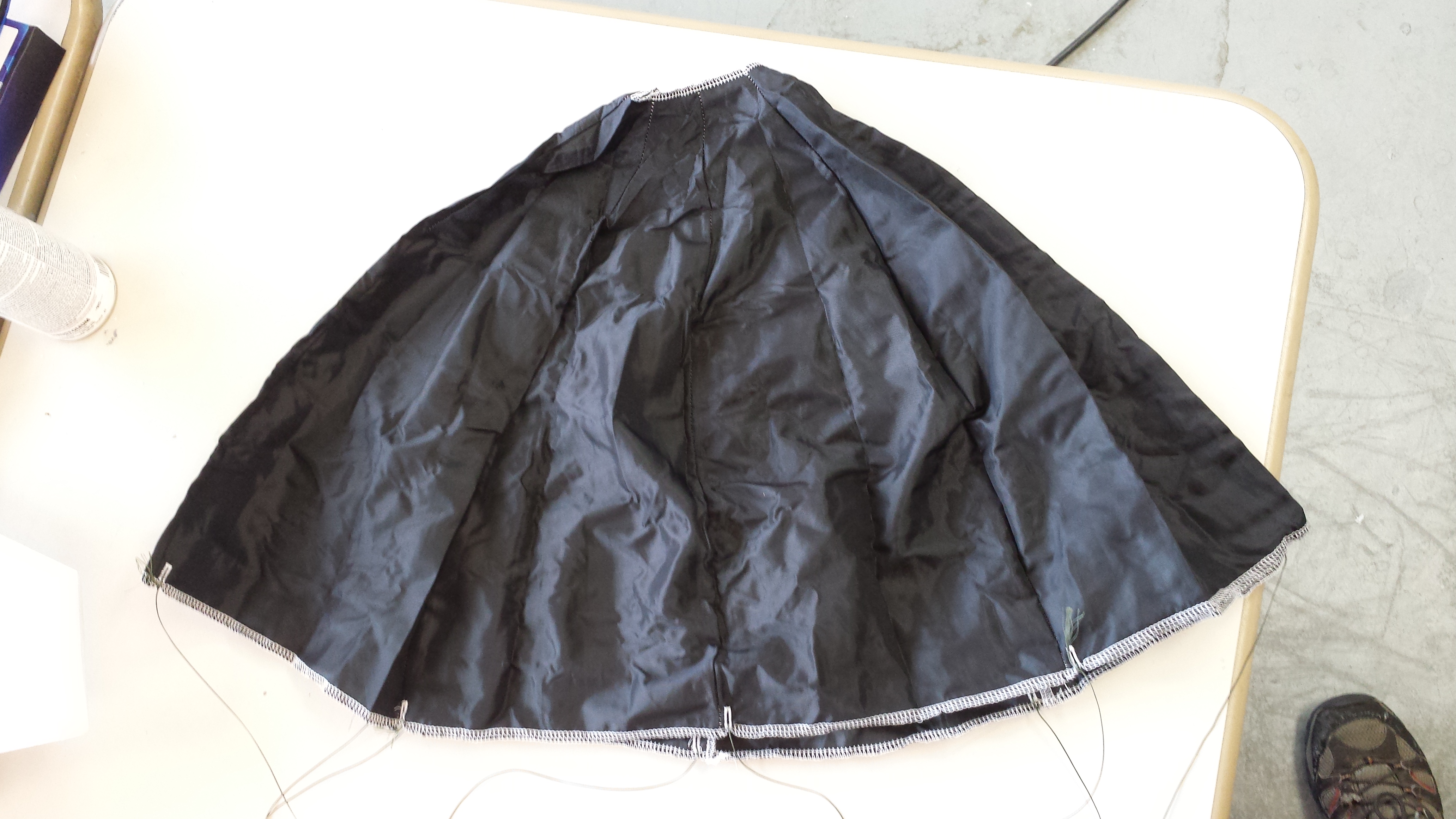 I've been working for the last few weeks on developing a parachute recovery system for E382s to reduce the need for manual flying. I know from my own experience that any time a human is at the controls, the risk of crashing is significantly higher. Parachutes have been made for small aircraft before but they're often implemented in an expensive or complicated way. The idea here is to make a simple, working parachute that reduces the overall risk of damaging the aircraft, is simple to use and cheaper to install.

Building the parachute itself was pretty easy, I used this gore size calculator by Scott Bryce and just printed the gores out as patterns. I accidentally printed the pattern out on 8.5x11 instead of 11x17 so this parachute is actually only 22" diameter - much smaller than what it should be for this weight. The gores are cut out of black rip stop nylon and just sewn together. The lines are attached at 8 points, with the lines simply tied through button holes. The line I used is too thin to be sewn into the material but I prefer the thin line, made of kevlar, for its weight and size.

Next I ran a few tests using some dummy mass at about the same weight as an E382, 1.70 kg, to see how quickly it would fall and if it would even open up properly. The first few tests were done with the parachute already pretty much deployed as it was from a pretty low altitude off my building's fire escape.

I thought the speed it hit at was slow enough, despite the smaller chute size, to not significantly damage an airframe and decided to move on with the tests. So I attached the parachute to a light-weight (1.5kg) airframe to see how it would fall and if the wings would affect the speed significantly. Because of the smaller size of the parachute, the airframe was actually still had almost enough lift to fly itself. So as it fell and built up speed, it would begin to pull out of the dive, then the parachute would slow its horizontal movement and it would stall, then presumably repeat until it hit the ground. In a few of the tests, the parachute line also got caught under the horizontal stabilizer, further complicating the problem.

Not wanting to call it a day, I pressed on to simulate the actual deployment. Ideally, the parachute would deploy on its own, be near the center of gravity and allow the plane to fall down roughly level and impact the ground on its belly. That all points to a deployment from on top of the wings, right in front of the motor. On the first try, I loosely packed the parachute on top of the wing and just tossed it. This allowed it to catch wind almost immediately which promptly pushed it straight back into the tail, where it lodged itself, allowing the plane to crash at high speed.

But I tried again, packing the parachute more tightly so it would roll out past the tail in a compact ball before opening up and catching wind. That did the trick! The dive/stall issue is still there but that should be fixed with the next parachute build.

All four tests above plus one more live deployment test on a flying plane are in the video below.

Would you ever use a parachute as your primary recovery mechanism? Why or why not?