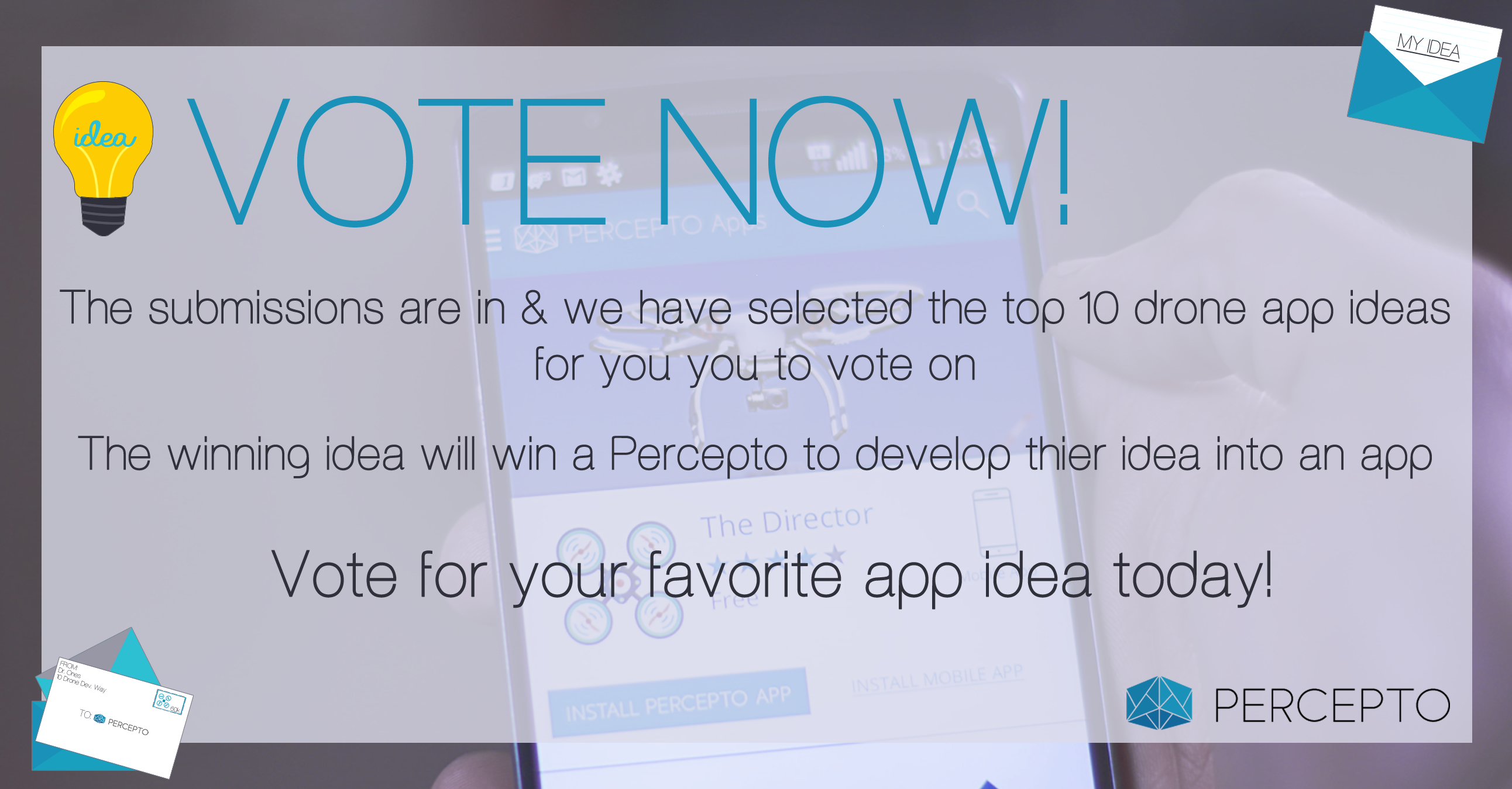 Thank you all for submitting so many great ideas in our drone app contest. There were so many submission it was really hard to pick just 10.

So with the final 10 app ideas listed below, we open up the voting to the public for you to choose which idea you like best, and want to see how it becomes a reality!

An app that will enable the planning and execution of amazing writing in the sky, like “marry me” signs made by airplanes. The user will be able to plan the desired string of text or drawing and the drone will perform it.

An app will allow users to utilize their drone to view and scan hard to reach places around their home. Percepto will be used to fly in close proximity and follow the edge of a roof or a wall looking for potential problems. This is a feature that GPS is not accurate enough to allow.

An app that uses Percepto to understand the user's hand gestures and translates them into control commands. The user will then be able to control the drone in the same way a conductor does with an orchestra.

An app that can perform a landing procedure without any pilot input. It will assess the condition of the landing area, calculate the appropriate path for the final approach, taking in to account the angle and terrain of the landing zone, as well as relative wind, moving objects on the ground and obstacles in vicinity to the landing zone.

The app will display virtual gates as overlay in the live video feed, especially for low riding quads (typically 250 quads such as the Lumenier 250 or BlackOut Mini H). This will allow to turn any open field into a racing track. The virtual racing track can be shared among multiple pilots so they can race together and simultaneously on the same track. Lap times will be shown on HUD (ie as overlay as well). Other flying quads, when having a rear led of a specific color, will be identified by Percepto and a box or shape overlay will be display on the live feed as well.

This app would be for long night exposure shots of a Percepto lit with different LEDs. You could import flight paths to the app that would control both the drone and the lighting. The flight path could be repeated with different colors or altered to add different elements to the exposure. In the end, you could have a long exposure of amazingly lit designs akin to night sky writing or Picasso's famous bull drawn in light.

With this app the drone could map all the moving objects in a specific area, e.g. a street, and send them back to the operator. The operator would then select an object for the drone lock on. The drone would then follow that object. This could be used by search and rescue or law enforcement.

An app that can be used around the world for shark spotting and beach safety. Generally a shark can be spotted quite easily from the air and with their size, shape and generally a similar color, I'm hoping I could try develop Percepto to recognize any sharks in a bay during regular flyovers throughout the day. If it spots a shark it would then alert beach authorities via text or a call using a SIM card add-on giving them a snapshot and GPS coordinates (and battery life pending) it would hover/flyover over the shark to provide them with a visual feed location of sharks location.

Not really related to the drone world, but can be done only with the computer vision technology. The app will use Percepto to translate sign language to into written text and voice.

Link to the voting form.

Thank you for giving us some great ideas and lots of inspiration.... GOOD LUCK!!

Our Indiegogo campaign is still live, please share and support.