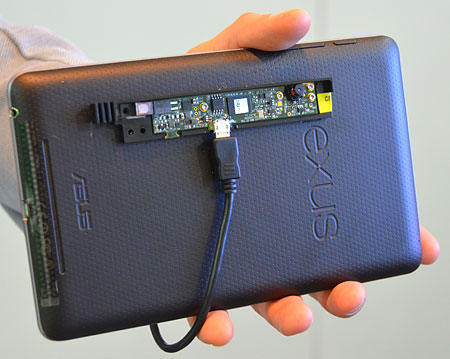 They said it was "pencil-sized" which seems like a bit of an exaggeration, but it sure is smaller than the Kinect.

PrimeSense's 3D sensor, which is what's inside the Microsoft Kinect, hasrevolutionized vision for very cheap and very expensive robots. That's not what it was supposed to do: it was supposed to help lazy gamers get off their couches and jump around a little bit. PrimeSense is still very focused on marketable consumer applications with the next generation of the 3D sensor, called Capri, but we're more interested in what it'll do for our robots. At CES last week, we got some hands-on time with Capri, and we have some details for you.

Engineers are familiar with the idea of being able to pick two of the following: faster, better, cheaper. PrimeSense has instead gone with much smaller, probably cheaper (although we're not sure), and arguably just a little bit worse when it comes to performance. The overall size of the sensor has shrunk by a factor of 10, which is really the big news here, and otherwise, most of the specs have stayed the same. Here's what you'll get with Capri:

PrimeSense told us that their focus was to "maintain" performance while focusing on miniaturization and cost reduction. And performance is nearly the same, with the exception of there being no RGB camera. This isn't great news for robotics, since having an integrated color camera is a nice feature, but we have to remember that we're just piggybacking on the fact that PrimeSense is really trying to get into the mobile market: Capri is small enough that it'll be able to fit into tablets (and eventually smartphones), and for pure 3D sensing, an RGB camera just adds cost and complexity that's unnecessary for the application. It's tough that robotics isn't yet a big enough market to allow us to dictate features for something like Capri, but as long as we can adapt this sort of technology to make robots cheaper and more capable, we'll get there.