We will look into the FrSky receiver and answer the question as to whether you should get one for your craft or project over any other receiver. We will also look into the feature list, compatibility and other such details of this receiver and compare it with the FrSky X8R Receiver as well from the previous article.

The FrSky X8R Pro is identical in every way to the X8R receiver, physically.The FrSky X8R Pro is a receiver that is mainly targetted towards planes and larger size quads or crafts where size is not a constraint and where you need pure PWM pins than S.Bus or PPM. The X8R has a plastic cover to protect it from the elements (which you can remove to save space and weight). 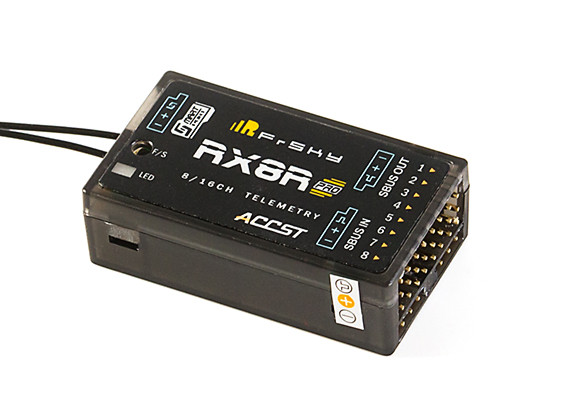 There is also a PWM RSSI output pin for getting Raw Signal Strength Indication for your Flight Controllers.

On the backside of the X8R Pro, there is a Smart Port pinout as well! This is great in case you want to connect external FrSky Sensors or provide telemetry data from your Flight Controller to your FrSky transmitter radio. It is weird that they have chosen to place the Smart Port pins at the antenna side of the receiver than on the right side where all the usual pins are situated; this will bring up an untidy wiring setup.

This can be useful in some cases where the craft is moving parallel to the transmitter but once it changes its heading, it can lose some signal strength. In most cases, this wouldn’t make much of a difference, so you needn’t worry ;)

On the top side of the receiver, you will find the F/S (Bind) button as well as the two RED/GREEN indicator LEDs.

All the above-mentioned points are exactly as described for the FrSky X8R receiver. The only way to distinguish between the FrSky X8R and the FrSky X8R Pro is by checking for the “PRO” logo next to the R-X8R logo on the top of the receiver.

The R-X8R Pro from FrSky is an ACCST supporting receiver. We have already discussed ACCST & ACCESS in other posts, so we are not diving into that in this one.

The PWM as discussed is 8CH output and the S.Bus pinout would be perfect for stabilizers and flight controllers.

What differentiates between the R-X8R Pro and the X8R is that the FrSky X8R Pro version has higher precision and lower latency. Its deviation of PWM is reduced to 0.5us, and the delay of PWM output is 9ms less than that of the X8R in high-speed mode. A feature that deserves mention is the decreased effect of interference caused by the ignition process.

The Smart Port connector on both the X8R Pro also supports FrSky FBVS from with A2 port for simple voltage monitoring as well as other sensors and telemetry systems from FrSky like the TEMS-01 for temperature monitoring of your craft or engine etc. or another example would be the FSH-01 sensor hub, so you can connect multiple sensors to one board which then relays the data to the X8R Pro receivers for telemetry.

This feature is quite useful in helis and places especially the ones with a petrol or nitro engine where you have to monitor temperature and RPM along with other data.

You can use the S.Bus to output all 16CH from the receiver and in case you need to use 16CH PWM channels, you can get an S.Bus to PWM decoder which will translate the S.Bus signals into individual PWM channels for all your servos.

But that isn't all the FrSky X8R Pro receiver can do. It can also work in the D8 Mode to work with transmitter modules such as the DHT, DJT, DFT and DHT-U. In this mode, you have 8 channels and at the same time, you can use the Smart Port.

All 16 channels require the FrSky Taranis or the XJT module.

For 8 channels in D8 Mode, you can use the FrSky Taranis or XJT, DJT, DFT, DHT and DHT-U modules.

The FrSky X8R Pro receiver is a great receiver for planes, helis and large drones where you need the full-range capabilities of the FrSky system and breaks out 8 channels of PWM and Smart Port connector with low-latency mode as well.

In the question, whether you need to buy this one, from my experience it is a great receiver with full-range capabilities but since the device runs on the ACCST protocol, I would personally resist from purchasing it, especially if you have the latest FrSky radios with ACCESS firmware. But from legacy builds and testing, this is a great receiver without a doubt!