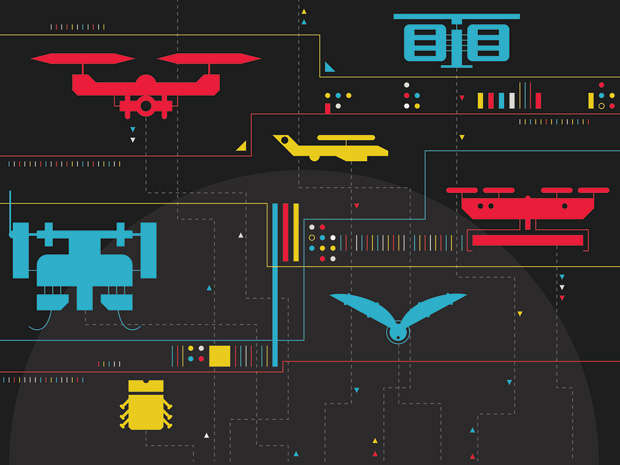 While many other countries are racing to develop and use such drones, U.S. innovators remain more or less stuck on the starting line, mired in federal indecision and red tape. At the recent Drones and Aerial Robotics Conference, at New York University, one speaker imagined what would happen if the Wright brothers were to face such restrictions today: Moments before takeoff, a black Chevy Suburban would pull up, federal agents would jump out, and they would halt the ill-conceived experiment for safety reasons.

While such intervention seems oddly reasonable today, government safety mandates are now being extended to astonishingly small scales. In 2007, the Federal Aviation Administration declared [PDF]  that small flying contraptions, even those the size of your hand, are considered “aircraft” and therefore require a Certificate of Authorization if they are flown outside for anything other than recreation—even if they hover just an inch above the grass. One high-level policymaker conceded that tossing a paper airplane for research or educational purposes would technically require FAA approval.

So it’s no surprise that many other countries, including Brazil, Canada, China, France, Israel, Japan, New Zealand, and Switzerland, are moving ahead of the United States in civilian drone use and development, the most rapidly growing sector of civil aviation. These nations are capitalizing on the emergence of new technologies, building patent portfolios, and creating high-tech jobs that a decade ago would have been located in the United States.

Fortunately, there’s a straightforward solution: Keep public navigable airspace exactly where it’s been for nearly a century now—hundreds of feet above our heads. This would leave landowners and local communities firmly in control of their backyards, neighborhoods, farms, and towns. Such a policy is also consistent with the landmark Supreme Court case United States v. Causby, which found that landowners “must have exclusive control of the immediate reaches of the enveloping atmosphere.”

This framework would ensure a far more human world, one where small drones are just tiny flying contraptions, not FAA-certified aircraft with the public right of transit over our tulips. These fascinating new tools could then be used where landowners and local laws allow, safely below navigable airspace and out of the way of full-size aircraft. This solution would give innovators some air to breathe and put the United States back in the game as the world begins the second century of civilian aviation.