If you've seen the Solo retail kiosks in stores like Best Buy, you will have noticed the cool built-in flight simulator that allowed you to use the Solo controller to virtually fly in a full 3D environment. We've now released a free and improved version of that for your own iOS and Android device, which is available now.  From the announcement:

To help new users learn how to fly without having to put their copter in the air — and to give all users the chance to hone their skills anytime, anywhere — 3DR has released the Solo flight simulator app. (It’s separate from the Solo app — get the simulator for iOS here, and Android here.) The app connects wirelessly from your mobile device to your controller, and the simulator’s responsiveness is mapped from the sticks to screen — the “sim Solo” on your screen responds to your control stick inputs just like the real thing would in the air.

In the simulator you can practice flying Solo freely, getting a feel for the flight controls as well as the camera controls without putting your investment in the air. It’s just like a video game: Your mobile screen displays the camera’s “first-person view” so you can get accustomed to seeing what Solo sees, using that to help guide your flight. Easter egg: There’s a passing speedboat. Can you land on it? (I don’t know if this is possible; I sure can’t do it.)

But perhaps best of all: You don’t need to be near the copter or even have Solo turned on to use the simulator; all you need is the app and the controller. Practice flying anywhere.

Below is one the Solo retail kiosks that have been using the flight simulator since launch: 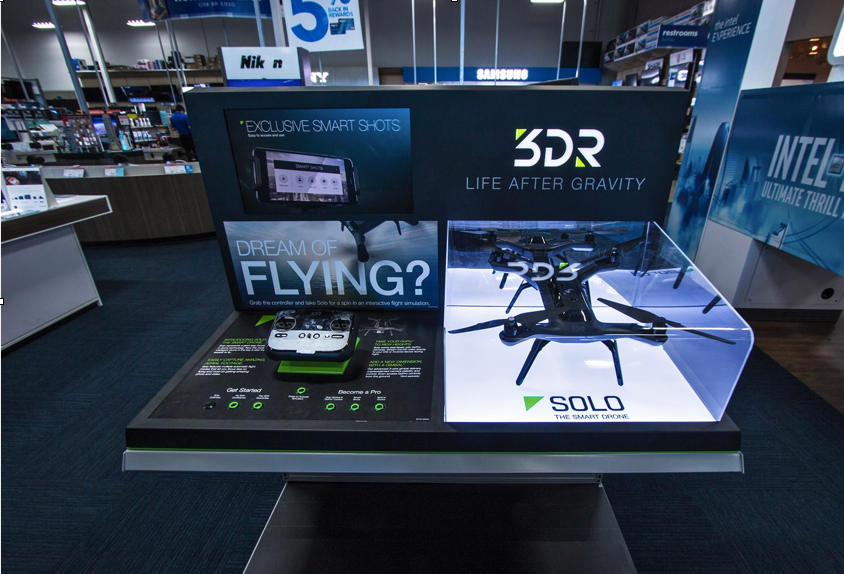