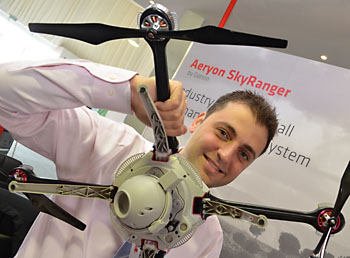 Hi All, Just pulled this image in from SUAS News (Thank you Gary) to illustrate a few really good concepts that it incorporates and talk about better Multicopter design a bit.

This copter has a lot of things right and is really a study in design excellence.

1. Most obvious is a sliding ball full enclosure camera Gimbal, very pro and really something we should be striving for.

2. The motors are on the bottom under the arms: More aerodynamically efficient with no prop wash interference and very little intake interference. Noticeably increased flight times and greater lift capability and much quieter.

5. Fully enclosed framework and a simple spring loaded landing gear that provides as little interference with the prop wash as possible.

Basically this quad incorporates the best design features I have seen so far and definitely provides food for thought.

I thought it might be worth soliciting comments and other thoughts about optimal multicopter design techniques.

of 23 Next
This reply was deleted.