I just returned from the UAV Day @ The Fleet Center here in San Diego. Quite a few folks swung by the San Diego DUG table and asked about the antenna tracker I built. Joe Aletky from 3d Robotics asked me to share the build of material for the antenna tracker. There's the Antenna Tracker wiki but I wanted something a bit heavy duty for the field!

The parts list is mostly sourced from ServoCity and cost me about $200 to build at the time. From my understanding the price on the servos has gone up a bit.

2 - Aluminum Channels, one for the antenna rail and one to hold the servo where you bolt down to the tripod. I'm running a 15" bracket and a 4-1/2" bracket.

2 - RobotZone channel mount gearbox, I went with 360 degree CLOSED LOOP servos. The ratio I used was 3.8:1.

2 - Servos. I went with HS-5485HB servos. If you're not good with a soldering iron, let ServoCity do the servos for you.

The rest I'll share in pictures since they describe how I did it better than I can. I will STRESS the same thing that the wiki states. Keep your tracker clean and the wires out of the way. The gears have no mercy when it comes to chomping wires and fingers!

Back side of the antenna rail. I'm running a 900mhz patch and the BOSCAM 5.8 receiver with TrueRC crosshair antenna. 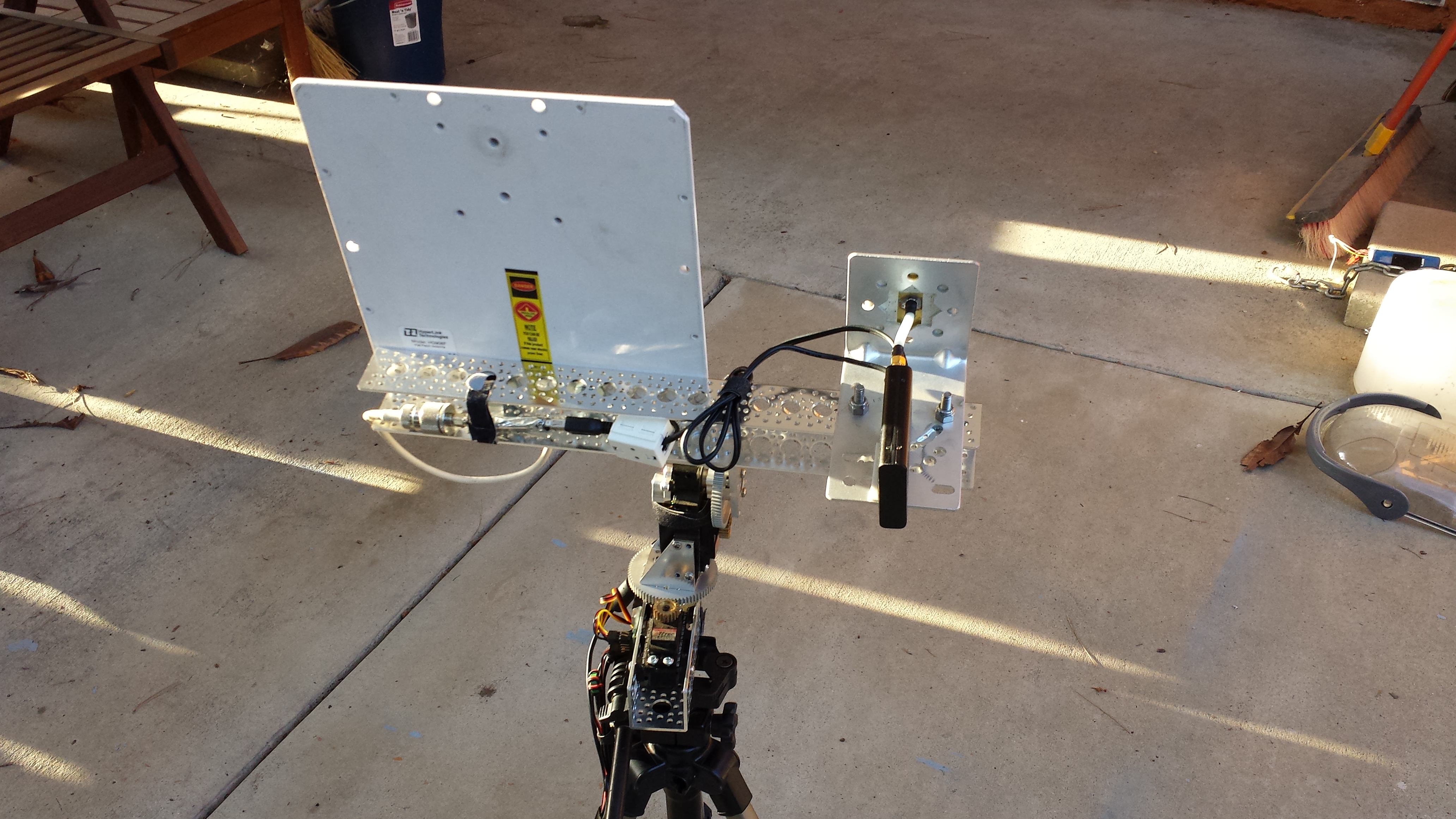 The video RX attaching to the Crosshair antenna. The bracket I took off of another antenna. 3dRobotics 'Ground' module. Soon to be swapped out with a RDF900! Hyperlink is now known as L-Com. Here you can see the Pololu servo controller, the Channel C Bracket, the 4-1/2 channel and one of the monster servos. Again keep your wires clear! The servo will eat them! I drilled a hole through the tripod head (It's a cheap one) and bolted the channel down to the tripod head.. Up close of the Servos for Pan and Tilt. Here you can see the 90 degree hub mount bracket. I use a regular BEC to power the servos from a 12v battery. Usually I'll draw this power from my lead acid ground station battery. I have two USB cables. One from the Telemetry and the other from the servo controller that plug into a USB hub. Those then plug into my laptop and tie into Mission Planner. From there everything is controlled via Mission Planner and the telemetry coming down from the plane.