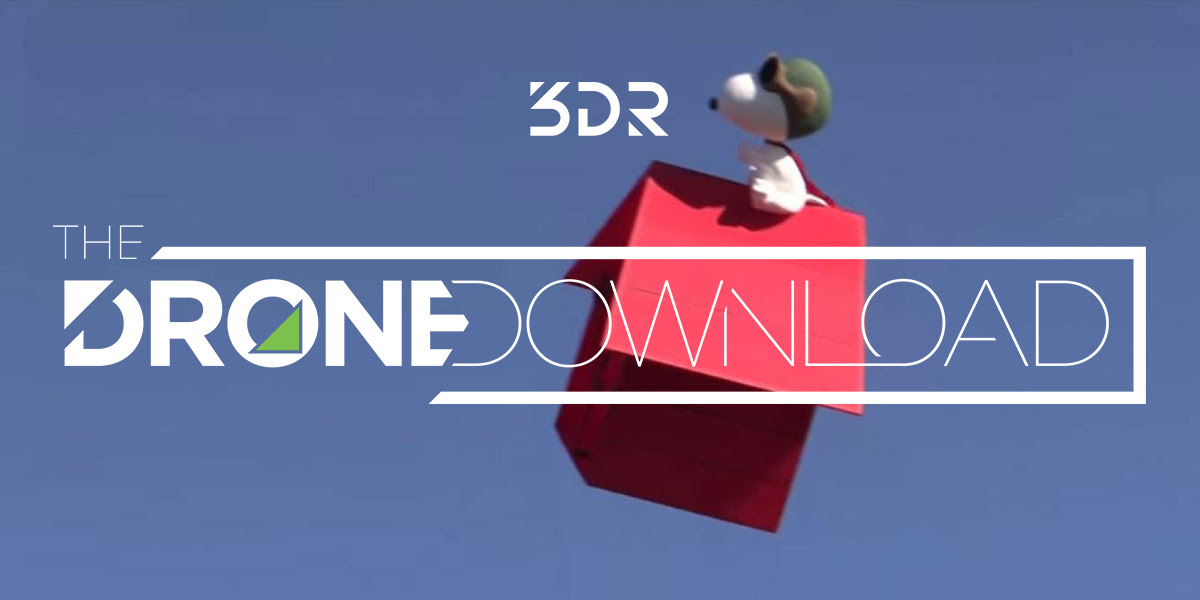 QUESTION OF THE WEEK

Each week this newsletter curates (hopefully) some of the most interesting drone stories from around the world. But at 3DR, our mission statement is “Help people see their world from above.” Key word: people.

There are obviously many ways to see our world from above, both recreationally and commercially. Drones can support an array of camera types, as well as other sensors that deliver imagery beyond the visual spectrum. This means that obviously many, many cool and interesting individual use cases (and photos and videos) go without attracting media coverage each week. So this week I’d like to know how you folks are using—or planning to use—your drones. Photos? Videos? Racing? Gathering data? Tell me about your use cases in the comments section below—and who knows, they may make it into next week’s Download.

And now, the links that mattered this week:

Following an incident where a personal drone grounded a firefighting plane—which cost the US Forest Service $10,000—California lawmakers are introducing legislation to make sure it doesn’t happen again. State representatives have proposed that flying a drone near firefighting activities should carry a fine as well as a potential five years of jail time. (Ars Technica)

Roll over, Saint Bernards: The Swiss postal service has partnered with Matternet to test autonomous drone delivery in the Alps. The drones are intended to deliver emergency supplies over the rugged Swiss terrain in the wake of natural disasters, as well as make other high-priority deliveries, such as lab tests. (Gizmodo)

Drones help pave a new entrance to San Francisco. The billion-dollar project in its final phase shut down Golden Gate traffic over the weekend. (3DR)

The first phase of construction at North Dakota’s groundbreaking “Grand Sky” drone business park is set to begin this week. The first step: A fence. “It’s not very glamorous and it’s not going to be backhoes and bulldozers and things getting knocked down and built,” said Thomas Swoyer Jr., president of Grand Sky Development Corp. “But that security fence is a very symbolic element to go up because it will really define the park space and give us the ability to control our own access to it.” (AP)

A drone reportedly had a near miss with a US Air jet making an approach to Charlotte International Airport. (ABC)

It’s no secret that Japan has been using drones in agriculture for several years. But here’s a look inside that industry from the Financial Times.

In stark contrast to the choked traffic by the Golden Gate, this weekend also marked California’s first international drone racing competition. “It’s just exploding right now, it’s just going crazy,” said Rob Wright of Los Angeles. “For people who are bored, sitting at their PlayStation who want to finally get out and do something real.” (Daily News)

Here’s a cursory look at what’s going on in the nascent drone investing space. It’s a projected $91 billion industry, but still in its infancy, which means there’s currently a dearth of available stocks outside of big players like AeroVironment. (Investor Place)

Last year as estimated 1,200 rhinos were slaughtered in South Africa. Drone technology might offer a way to stop the poaching by identifying hot spots and tracking poachers with night vision. (PRI)

In York, Canada, police will use drones to more efficiently map the scenes of accidents. Currently they use a “detailed electronic mapping process,” which is time-intensive; drones performing the same function will get traffic moving again. (The Star)

Pardon me this quick hometown shoutout: Google is now testing driverless cars here in Austin. Well, one car. Not sure if this is the type of weird intended in the “Keep Austin Weird” mantra, but I guess it’ll do. (The Next Web)

At Comic-Con, a flying Snoopy drone hunts the skies for the Red Baron. (Popular Science)

And from the same guy’s workshop, an R2D2 drone. (Gadget Show)

ICYMI: Here’s NatGeo’s roundup of last week’s winning photos from the global aerial photo contest they sponsored with Dronestagram. Among the winners is “a selfie with sharks.”

There’s nothing wrong with a little shameless self-promotion, right? Maybe not if it’s this cool. Check out these pretty remarkable stills taken this week from a Solo in Norway. (3DR)