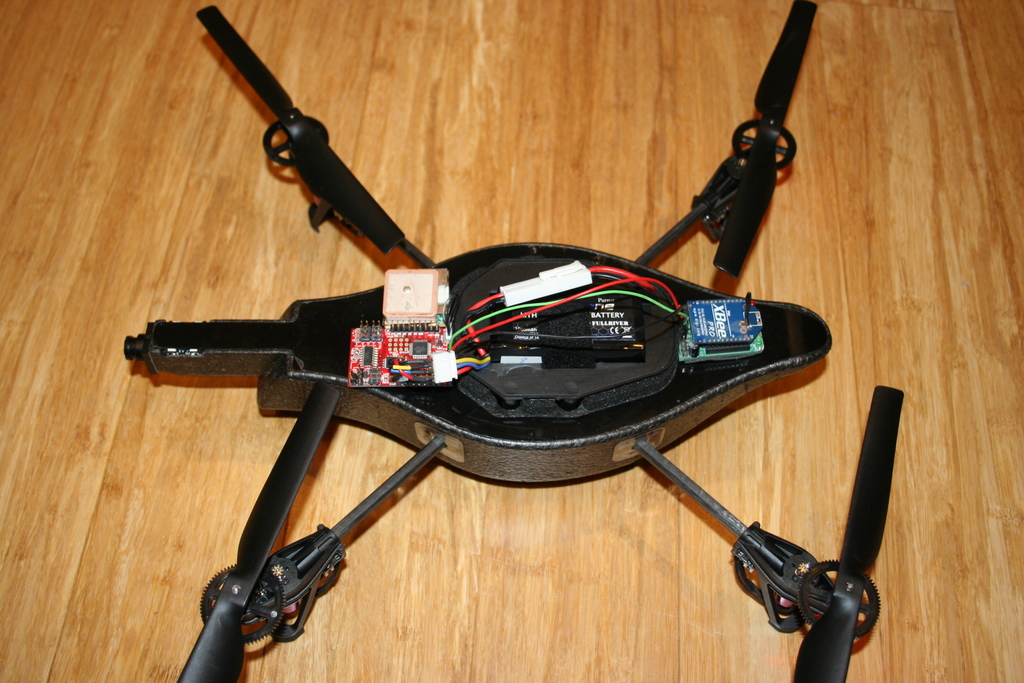 There are loads of open source quadcopters out there, but they're all a bit too DIY for me--I just want something cheap that works right out of the box. I love the Parrot AR.Drone, which fits that bill, but it's not really a UAV, because you can't give it waypoints and it doesn't know where it is since it doesn't have GPS.

Adding GPS to the AR.Drone would be easy if you could get access to the datastream the AR.Drone is sending back via WiFi, and there is indeed a physical port that could allow that, but Parrot has not enabled that and they don't want to emphasize that possibility for fear that the AR.Drone might get regulated as a UAV, rather than a flying toy.

So rather than wait for them to turn that on, I decided to take matters into my own hands. As you can see above, I just added an ArduPilot, a GPS and an Xbee to the AR.Drone. They're powered by a tap off the balancing connector of the quad's battery, but otherwise they don't have any connection to the onboard electronics.

(Note: you don't really need ArduPilot for this--you could probably connect the GPS right to the Xbee--but I'm using it right now to parse the GPS data and just send down the essentials, along with providing a power regulator for the Xbee and GPS module. But going forward, having ArduPilot onboard will let us add other sensors and do more onboard processing.)

All this setup does is send back GPS coordinates to the ground station, with an Xbee at each end. But that's enough to turn the AR.Drone into a proper UAV, since Parrot has already released software that lets you control the AR.Drone from a PC. So all we need to do is modify that code to take the GPS telemetry in from the Xbee, compare that with given waypoints, and calculate a directional vector for the AR.Drone to fly to hit the next waypoint. Then that XYZ command can be sent back to the AR.Drone via WiFi using the Parrot data standard.

So in a sense, the AR.Drone handles the inner loop (stabilization) of an autopilot onboard, but the outer loop (navigation) we'll do from the ground station, along with image processing and other mission planning. Because the outer loop only needs to run at GPS speed (1Hz-4Hz), wireless latency isn't an issue.

Right now, the only official AR.Drone PC ground station is for Linux (here), which is a bit over my head. But now that the quads are getting out to developers, I'm sure someone will port that to Windows, at which point I can have a go at writing the software to read the incoming Xbee data from the serial port and turn it into flying commands to send back via WiFi.