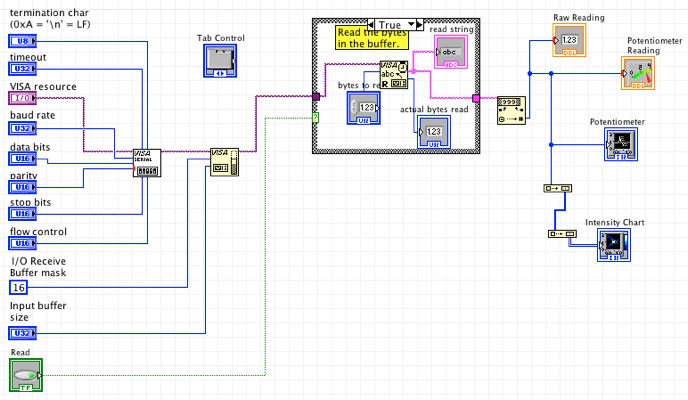 A quick tutorial, found here. Excerpt:
"This is a quick (REALLY quick) writeup on establishing a connection between the Arduino Duemilanove and LabVIEW. I used a very simple setup where the Arduino would send its data via serial, and the listening LabVIEW would ‘hear’ it and plot it to a waveform chart. To achieve 2-way communication, the Arduino would listen for a command at the beginning of each iteration. If a command was heard, it would react by turning an LED on or off, depending on the command received. If nothing was heard, then it would continue on through the analogRead() cycle to measure the drop across the potentiometer. The method is inefficient and barbaric, but my intent was proof-in-concept. The concept may be improved upon to increase reliability and efficiency, but I have not had the time to do so."
(via the Arduino blog)
E-mail me when people leave their comments –
Follow