For anybody interested in using a joystick or flight yoke to pilot your ArduPlane, I have successfully configured the CH-Products 'Flight Yoke' to work with a Spektrum DX6i using a PPM converter and a script written for the yoke that will allow you to change flight modes from the yoke using the buttons and the programming language supplied with the yoke driver.

The yoke can be purchased from here

I paid $85 for one and it works great. There is a newer model, but for basic flying, this one has plenty of buttons and knobs to get the job done.

The PPM converter that I used can be purchased here

This is the 'CompuFly' ppm converter for use with JR transmitters, but it also works with the Spektrum DX6i (and I assume other Spektrum transmitters), by flipping the polarity to 'positive' PPM.

The main screen of the flight yoke software panel looks like this:

You should test the joystick with your flight simulator before you try making it work with the PPM converter. My test was done using X-plane. It's as simple as following the wizard, and proceed to the 'Test/Calibrate' screen to get the yoke setup for normal windows joystick operation.

Once you have added your yoke to the CH Control Manager, you can then proceed to configure each axis to control your plane. My setup has the following configuration:

The modes are (of course) going to be whatever you have them set to in your ArduPilot, but these are the ones I have in my default config. The resolution of the modes can also be modified and more buttons added to the script to achieve more mode possibilities, but my DX6i is setup for 4 modes.

For the Yaw axis, there is no actual joystick input because I do not have the pedals, so I chose to use a mixing mode and added the Roll channel to the U-axis output in a script to simulate the rudder working with the roll channel. The rudder mixing will apply when flying in MANUAL mode. The ideal simulator would also have the pedals which are optional. You can buy these as an add-on and use them with the yoke and create a single simulated joystick.

I will describe how to setup the script to achieve the rudder mix and button mode code to make this setup work with the ArduPilot for those that do not have the pedals.

To customize the output of the yoke, the yoke must be configured to run in 'mapped' mode as shown in the following screen: 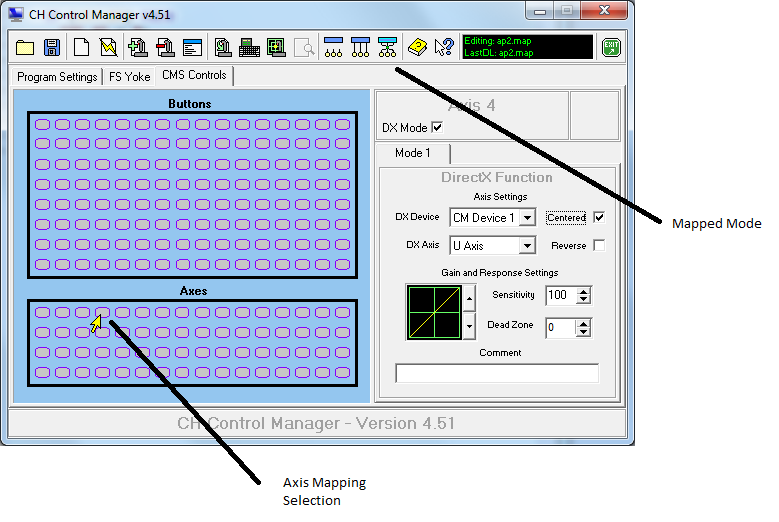 The "CMS Controls" tab will allow you to select which joystick channel will be used in the scripts and which joystick output will be assigned to that channel.

My configuration is as follows:

CMS.A4 = U-Axis (Yaw Channel) The output is computed in the script.

To make these channels programmable, check the "DX Mode" box as shown above.

My transmitter is a 6 channel device, however if yours has more, you can just pick additional CMS inputs to use for the other transmitter channels, and assign them accordingly

On the "FS Yoke" tab, the first three channels should be assigned to Roll (X-Axis), Pitch (Y-Axis), and Throttle (Z-Axis) respectively, and the 'DX Mode" box checked for these channels. This will force the yoke to pass these channels through to your transmitter without any software input. If you want to modify the behavior of these channels in the script, then you must uncheck this box on the 'FS Yoke' tab, and check the box on the CMS Controls' tab for that axis.

The script is actually very simple. For the rudder mix, it's one line of code:

This will give you a 25% rudder movement compared to the roll when flying in MANUAL mode. You can play with the mix as you desire. If you are flying in FBWA, you probably have some rudder mix, so it's probably a good idea to match that here. If you don't want any rudder mix, delete this line of code and the rudder will stay fixed in MANUAL mode.  For stunt flying or 'knife edge' tricks, you may want to get the pedals, or try assigning the 'prop' or 'fuel mix' channel to the rudder and use the slider to control the rudder - this is advanced, and I have not attempted such a configuration but it's possible to setup using the scripts.

Here is the entire script:

To cut and paste the script into the joystick, press the "CM Editor' button on the toolbar and paste it in. Then press the "Download" button as shown in this screenshot: 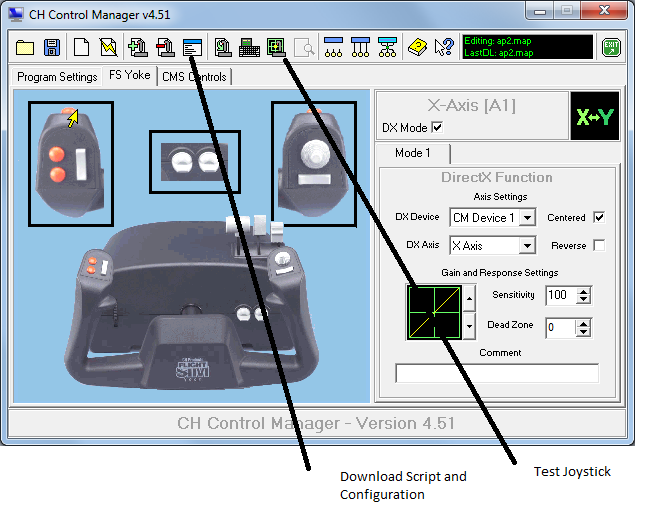 Once you have 'downloaded' the configuration, you can then test it. You should see the following screen after you enter the test mode: Lastly, buttons 5 and 6 should control the S0 (Slider 0, Gear channel). On my plane, this turns on the camera for FPV.

The CompuFly USB PPM converter has a single screen configuration as shown as follows: 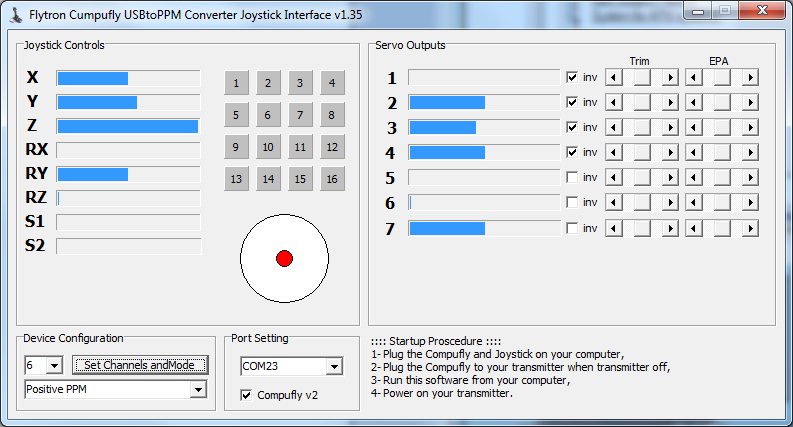 For the Spektrum DX6i, set the modulation to 'Positive PPM', and 6 channels. If you have a different radio, you will have to check the documentation or experiment. For my radio, I have channels 1-4 set to INVERT, (inv check box). These are the surface and throttle control channels. You will need to experiment to get these right for your plane and transmitter depending on how your servos are configure with the ArduPilot. For the 'flight modes' and 'Gear' channels, my configuration is set to non-inverted.

The key point of the configuration not shown here is the Joystick-to-channel mapping which is in the (settings.ini) INI file stored in the same directory as the CompuFly.exe application.

Here is my configuration:

You can cut-and-paste the previous text directly into your INI file. Take care to test this completely with your plane on the ground and the prop removed! If you get the throttle channel backwards, the motor could go full on you. Be careful here.

To test your setup, plug in the PPM converter to the back of your transmitter in the 'Trainer' port, and turn on your transmitter and power up your plane. Flip the 'trainer' switch on the DX6i.  Move things around and see what happens! For my transmitter, I replaced the trainer switch with a more robust toggle switch. The original one broke off.

If everything is good, you should be able to control everything using the Flight Yoke, including the flight modes.