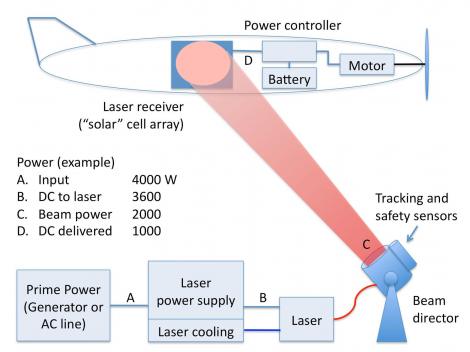 We've covered this before, but Hackaday has a good update on the latest ground-based power techniques:

Lasers can no be used to keep a UAV in the air indefinitely. The trick is to add an array of photovoltaic cells specifically tuned to an IR laser’s wavelength. A ground system then directs a high-intensity laser beam onto the aircraft’s cell array to transfer energy while in flight.

After the break you can catch a video from a trade show where a Lockheed Martin employee describes the successful testing of such a system. But there’s a lot more information available in the white paper (PDF) which Laser Motive has released. They’re the folks behind the technology who have teamed up with LM to implement the system. The laser unit on the ground can track a UAV visually, but there is also a method of using GPS coordinates to do so in the case of overcast skies.