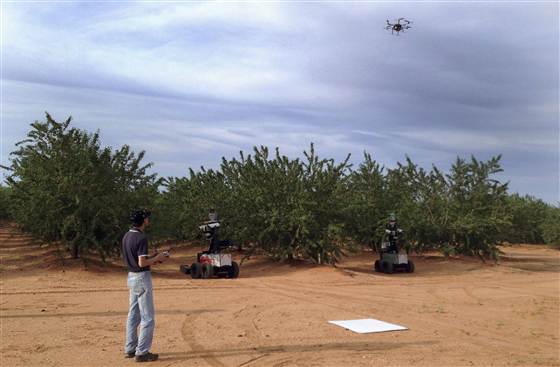 To View the Video they did with Chris Anderson click on the BBC link to the Story Below:

Pilotless drones have had the biggest impact on the battlefield, serving as eyes in the sky and even as attack aircraft. But could they find another role, helping farmers boost

The popular image of drones is as expensive pieces of military hardware which can be used for spying – or even going on the offensive. But that's changing as robots become more integrated with our everyday lives. Farming is one of the new frontiers, as food production has become more automated – everything from GPS-guided tractors to automated milking machines - and drones are started to be incorporated into what's known as precision agriculture. Robots are being used to survey crops and help farmers manage the water and chemicals they use in vast fields. Chris Anderson, the former editor-in-chief of Wired magazine, recently switched careers to move into drone manufacturing. He co-founded 3D Robotics, which is building drones in Mexico and the US which may one day keep a beady electronic eye on the food being grown for our tables. BBC Future visited 3D Robotics' workshop in San Diego, California. (Additional footage courtesy of 3D Robotics)