I need your opinion on why the following might have happened.

Last weekend I had a nasty crash with my EasyStar and APM1.0, using ArduPlane 2.28 and MissionPlanner 1.1.19. On that day temperature was between -10C and -5C, light wind and lots of sunshine. I had already completed two missions to take some movies which had gone absolutely smooth and as planned. As the sun was about to set, I loaded a mission I had already flown earlier last year. It's a steeply declining zigzag path, which would allow me to  take photos with the the plane banking hard, gliding without motor, to make sure photos came out as sharp as possible. The mission was uploaded to APM, then downloaded again to check everything was ok. Preflight check as usual in stabilize mode, everything seemed ok, so I got the plane in the air. I climbed in narrow circles to about the altitude of the first waypoint, then I switched to AUTO.  The plane did a sharp turn, and then set out on a long leg to the first waypoint. Or so I thought, I didn't remember exactly where I had set the first waypoint, so I let it fly in the wrong direction for too long, before realizing there was something wrong.

The plane was already too far away and against the bright sunset sky. There was no way I could have revovered manually.  So I switched to RTH, but this only made the plane stall two times and then dive into the ground.

Fortunately the APM still boots up and I was able to recover the onboard log data. I don't have telemetry, so I have to rely on this data to get a better understanding of what happened. Most interesting is the attitude data from the log.

On climbing to altitude, attitude seems to be ok: 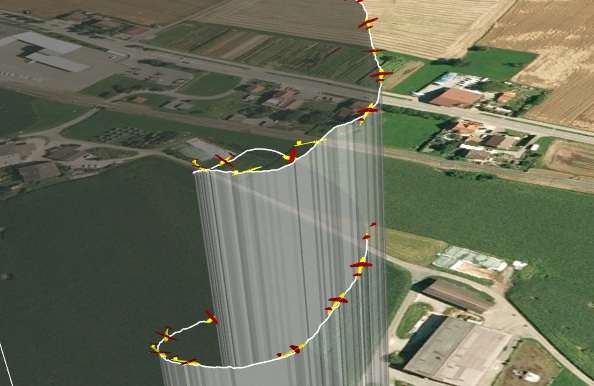 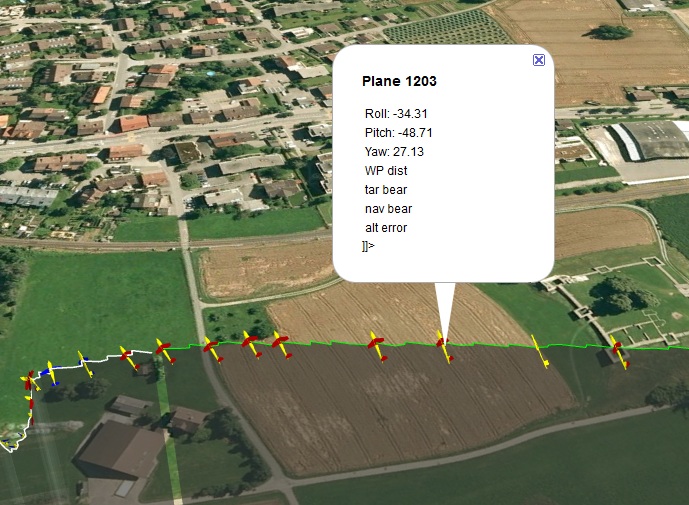 I could still see enough of the plane to know it was flying more or less level when the log data suggests a pitch angle of -50 and a roll angle of -35! What was going on there?

Here's just after switching to AUTO. Something must have happened that made the IMU sensors go completely wrong. Check the plane symbols on the white path and then on the green path. I can definitely confirm that the planes attitude was completely normal then. What I want to know

Break out your crystal balls and tell me what happened :)

I'd love to rely on APM in the future but I need to know its weak points.