I have come to an idea of a problem that has shown up. The more i have read it seems this may be a problem for others also but never been explained. This may turn into a long post but it will be well worth it to read.

Keep in mind that all of this is during STABILITY mode flying. No auto, RTL or LOITER, which we know if the compass is off in those modes, it will "toilet bowl"

During 2.9 firmware, Y6 frame, Yaw pulls one direction while only pitching forward on an aggressive angle. If pitching forward non-aggressvie no yaw issue. When it would yaw off a little, you could just correct it to maintain a forward flight with the yaw input on the stick.

Changed motors on the frame, had a little extra ESC wiring that ended up below the APM. Still 2.9 firmware, all the same parameters.

Testing flight with the motors, everything seemed fine but yaw issue is stronger. As im about to land i pitch forward fighting a breeze and coming closer to home. It starts to yaw but it continues to yaw until its spinning. I counter it with yaw input and it starts to wobble. I keep fighting yaw, spinning, the wobbles get worse and it falls to the ground, even with me at 100% throttle.

Confused, i test EVERYTHING i could think of because i assumed hardware failure. Update to 3.0.1 firmware and test compass interference. HUGE amount of interference, over 100% at full throttle mission planner tells me. So at this point im figuring electromagnetic interference on the compass causing the yaw problem.

Wanting to confirm its compass making it SPIN (not toilet bowl, because we are flying in stability mode), i try to recreate/provoke the problem. Only updating the firmware,  i go out for a test flight after calibrating compass, accel, and full checklist ect.

During the flight it hovers fine, once i pitch it starts to spin, and slowly spins faster and faster. But its staying stable on the pitch and roll axis. Once i start to fight the spinning by input, it starts to wobble. Stop fighting spinning and wobbles stop. I did this a couple times to confirm.  The only way i could make it slow the spinning is by reducing the throttle (lowering EMI).

Main problem is the EMI on the compass, Secondary is heading taking precedence over stability with certain inputs of information.

What i have come to is that the copter was trying to correct heading on incorrect information because of the EMI. As it was trying to correct the heading, it did nothing but create more EMI by pulling more current and never reaching the destination heading. As a visual hold your arms out at 45 degrees. Label one arm CURRENT HEADING and one arm DESTINATION HEADING. Now try to bring them together by ONLY spinning your body, it wont work. Thats what the copter was trying to do to come to a heading point.

This part gets tricky,

As for the wobbles, i tried to fight the spinning with yaw input, it made the copter unstable because of multiple reasons. I believe the main reason is the way it spins the motors to yaw.  So if im telling it to yaw full CW and the magnetometer-heading correction is telling it to yaw full CCW it creates a situation where either all of the motors or 3 of the motors are not spinning fast enough to create enough lift, even at 100% throttle. Unfortunately i did not have the motor log turned on during both flights. It seemed to me that it was trying to fly with only 3 motors as it came to the ground wobbling in the first flight.

If i fought the yaw spinning created from incorrect heading information created by the EMI it wobbled. If i let it spin to its content, it was fully stable but spinning.

Now im not positive if this can be applied to other frame types. But it seems like it would be more of a problem with the motor layout on a y6 where you have 120 degrees apart from each arm, and the CW-CCW orientation.

1. I am going to test fly with the (COMPASS_USE) parameter turned off, to see if it will yaw-spin.

**Keep in mind all of this has been done in STABILITY flight mode, where it can use the compass to maintain heading, but not required from my understanding. **

UPDATE: Tested flying with compass turned off in stability mode. It fixed the yaw-spin issue, but the heading varies quite a bit. About 40 degrees either way after you make an input. Interesting how it reacts without the compass affecting the yaw-heading.

Would a lower KV motor vs a higher KV  motor of the same size create more or less EMI?

Would the Y6 config create a larger field of EMI having two motors on one arm vs one motor?

Obviously EMI is the biggest problem and can be solved by moving the magnetometer. But do you really need yaw to be corrected in stability mode by magnetometer, or just go off the acc and gyro readings.

Maybe we can get some of the developers or guru's to read this and give some input.

If anybody has any input please feel free to comment.

Log from the test flight where it would spin and wobble attached.

Also here is a picture of the YAW graphing. 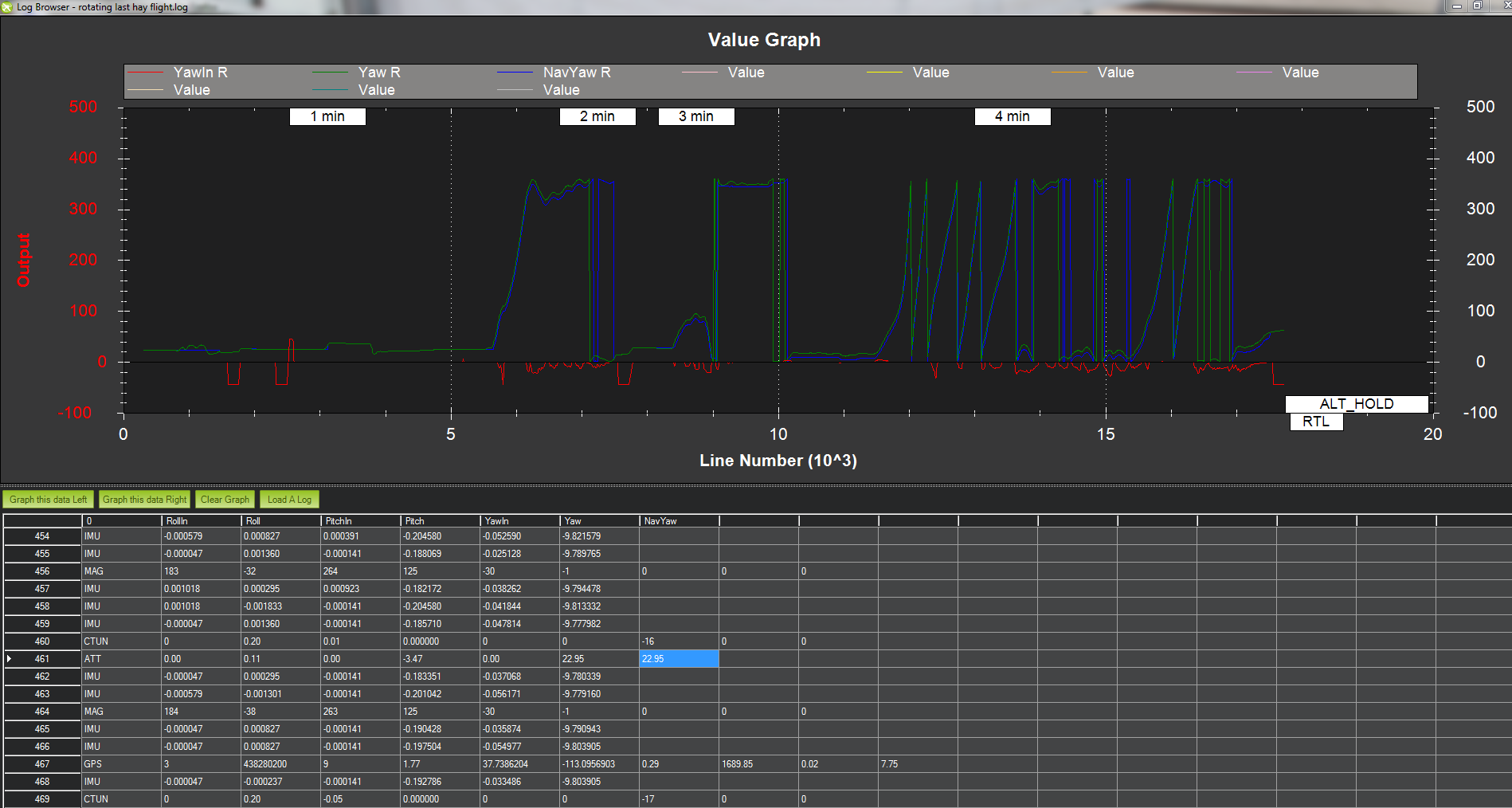