I'm new on the forum so maybe I'm posting in the wrong section.

Yesterday I was out flying with my Tri and tried the mission planner for the second time which resulted in a crash. I have recently "upgraded" from multiwii and my gathered experience on multirotors and RC of any kind is combined not more than the past few months.

Its difficult to see well on the video as the copter is far away and bad camera. Needs full screen to se anything.

My hardware is a Crius AIO Pro with the NEO6M GPS. I have tuned my platform using the autotune and it appears to me that it has got the settings quite good as the platform now is very stable and responsive (maybe overshoots a little but thats within margins).

Last time I ran mission planer it went between points making a "bow" and not a straight line. I narrowed it down to the compass as "simple mode" did not work well either. Stabilize, Alt-Hold and ACRO where really stable but simple and loiter where not.

What I did was move the power cables about 2cm further away from the board and yesterday the "simple mode" worked like a charm. I was also getting nice straight lines in mission mode but all of a sudden a crash.

Just before the crash it followed waypoints really well until it seemed to miss one (pass by) and then it entered a circle I was not fast enough to save it from. What surprised me was that the copter dit not do circles in the air as before when loiter was messed up but instead it circled to change its inclination so much that it fell. I thought that it was always in stabilize when in AUTO. Anyways.. unfortunately I don't have logs activated to save some space on the FC and also to get better performance. What you can see in the pictures below is just a print screen from the video but shows on my phone how the copter went in straight lines and then circled before the crash. 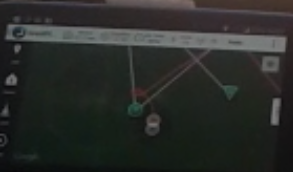 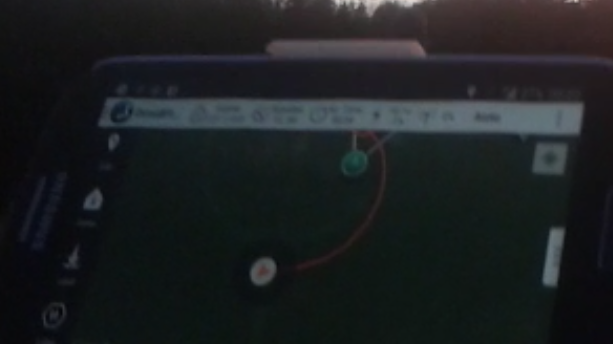