First post here so if this is in the incorrect place please let me know :)

I'm flying a Skywalker X8 using the pixhawk autopilot and running mission planner as a GCS. Apart from the obvious problems such as hand launching, one thing that seems to not work correctly is the loiter, guided, and auto modes. Ill explain the three instances.

On multiple occasions now, when I enable loiter on the RC, the aircraft will hold altitude and airspeed perfectly, but it will tend to drift away in loiter mode. It will look like it's starting to loiter, and then basically reverse it's direction halfway through it's initial turn. It holds it's altitude and airspeed very well, but won't hold a ground track.

Here's what it looks like on the mission planner - The whole blue ground track the aircraft was in loiter mode. Initially we thought it could have been a bad compass calibration, so that was redone, but it still did this after the compass cal. Basically this is what it does anytime loiter is activated, will snake around and drift off. Is there a parameter somewhere that I am missing? 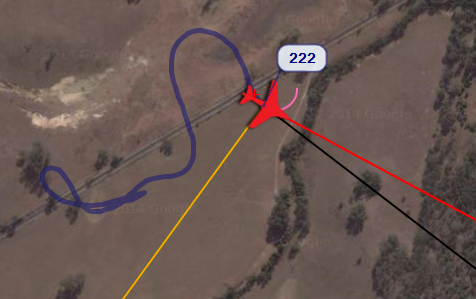 This is loiter activated a few times - not just one loiter. As you can see it never seems to be a circle around a waypoint. Guided mode seems to do a similar thing - It will approach the waypoint, but never fly directly to it from it's present location. It will snake around for quite a while until it gets near it, and then sometimes turn away from it again (without actually flying over the top of it)

I've only activated auto mode once for a small waypoint mission. In auto mode on this flight - It looks like it is trying to approach a waypoint, then it seems to get inself into some kind of death spiral, where the bank angle kept getting tighter and tighter. Even though I had set 35 degree bank angle max in the parameters it got up to about 70 degrees. Does the bank angle limit apply for all of the autopilot modes or just the FBWA and B modes? All other modes seem to fly quite well, but from some of the videos I've seen on youtube loiter will just paint a perfect circle on the ground while flying along happily. Do I need to add more weight to the GPS over the compass or some other similar parameter?

Would appreciate any help or advice, I'm fairly new to the pixhawk system so it's very possible it's a setup problem on my end.