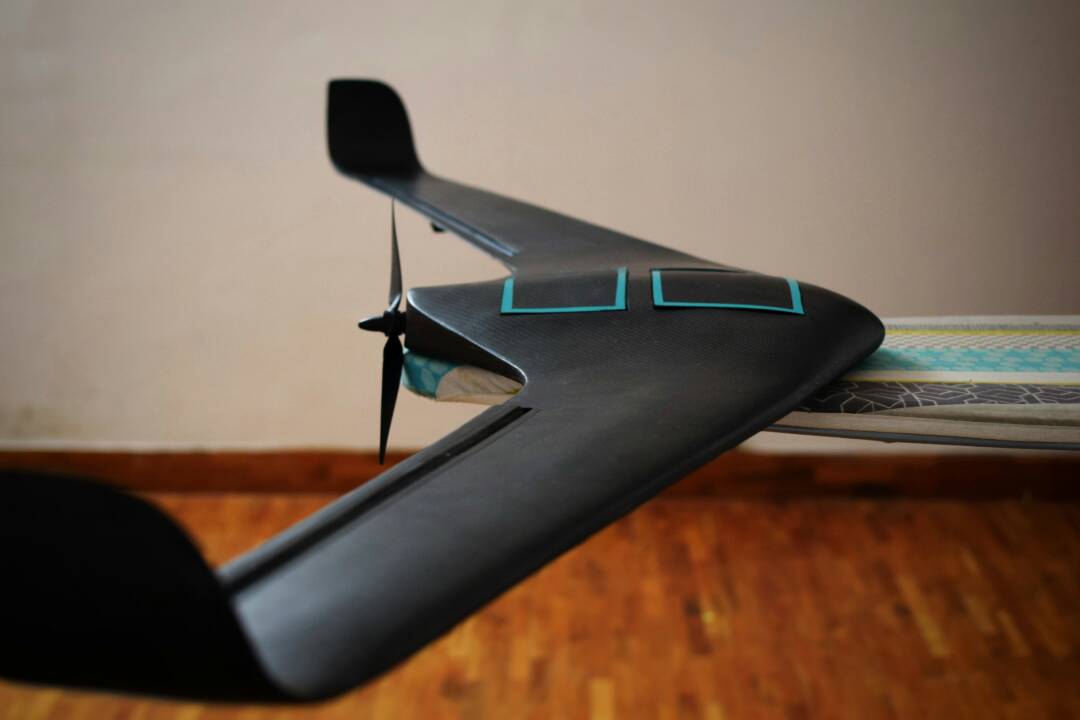 So I have been working on this for a while now. It is designed for aerial photography/surveying. Carbon fiber flying wing, quite durable. Had an excellent vendor work on this (manufacturing here is much cheaper in India). Here are some specs:

You know what’s better than flying? Hovering, just levitating mystically through the air and keeping it still. And it’s one of the reasons why the multi-copters enrapture me to certain a degree more than the other flying aircrafts.

Few days back I started to work on one such multi-copter with goals to make it capable  of way-point navigation and carrying a gimbal with head tracking functionality. Though I chose a hex frame initially-for payload requirements, but later chucked the idea out realizing that I can get almost the same thrust with a Y6 configuration without sacrificing the control sensitivity and the extra hours of work. For multi-controller I chose APM 2.5, since it is really simple to use and comes with pre-written firmwares which you can just flash onto your controller EPROM and you are good to go. Besides it’s easy to interface it with the optional hardware like gimbal unit, payload latching mechanism etc. But primary reason which motivated me to use APM was that it was the only controller I had available with me at the time.

Although Y6 configuration has better control sensitivity as compared to the hexa, here is the rub. With a Y6 configuration you lose on efficiency since the rotors are aligned co-axially. The aerodynamic view point would be that the bottom rotors pull in the the wake released for the top rotors, messing with the efficiency. Also since the incoming velocity increases, the effective angle of attack of the bottom rotors becomes low and it needs to function at even higher speeds to get the same lift; one more reason for inefficiency. All in all, the net efficiency decreases by almost  15-20% as compared to the hex configuration, for the coax props of same size and pitch. But hey, who cares when you are still getting the required flight time, better control sensitivity and a wider field of view for your camera. And anyway that problem can be solved to a certain extent if you are a bit of aerodynamics nerd. How? Well you can use blade element+momentum theory (google it, I am not going to spoon-feed) to optimize the pitch and diameter of bottom prop for the highest possible efficiency.  Generally the pitch and dia of the bottom prop will be higher than that of top one. Higher pitch will compensate for the reduced AOA and bigger dia will ensure that your tip doesn’t stall due to wake from top prop. I will share the Matlab code for optimization soon.

The Y6 configuration, itself has two versions A and B. Except the tail rotors, all the top rotors of Y6a has clockwise motion, while bottom rotors move in opposite direction; for the tail rotors top one is clockwise and bottom one counterclockwise. However, for Y6b, all the top rotors move in clockwise and the bottom ones move in opposite direction. I prefer Y6b over Y6a since it offers better yaw stability. Below is the pic of the configuration.

After having flown with this config several times, I can attest that the controls and stability are just fine and it flies like a dream.

I wanted the frame to be as lightweight  as possible- obvious, isn’t it? I had a 3D printer at my disposal; thanks to the awesome Aerodynamics club at the campus which I am part of, you can like our facebook page https://www.facebook.com/AeroD.BITSGoa?fref=ts . Now, I had few options available for the the arm rod material-aluminum, wood and unidirectional carbon fiber rods. I chose CF rods since the specific strength is much better than that of aluminium. Only problem with unidirectional CF rods, unlike the woven ones, is that the strength is really low in radial direction and you can split the rod just by pressing it between your hands. And the problem with the 3D printed parts is that they are really weak in axial direction(perpendicular to the layers) and strong in radial direction. But if you cap the ends of the unidirectional  CF rods with 3D printed parts, voila, it will be adamantium strong; okay, may be a bit less. So the frame is mostly made up of 3D printed parts and  unidirectional Carbon fiber which is cheap. The total weight of the frame came out to be 230 grams- pretty lightweight, right?

Here are the specs:

3D printable gimbals are a bit problematic because if you mess it up, they tend to vibrate a lot. The trick is to place the COM of all the moving parts of gimbal as close as possible to the primary servo- the one which is stationary w.r.t to the body, while designing it. If you don’t, it will create significant moment around  the gimbal-servo joint and result in huge amount of vibrations.  Also you have to get the thickness of the gimbal parts right, if you don’t they will tend to bend a lot.  Instead of designing or printing gimbals, I will advice you to make it using balsa, it will give you high stiffness and low weight. You don’t need to worry about the strength, you can stick two pieces of balsa such that the fibers are perpendicular to each other- it gives you really good strength.

Ahh! A lot of magnetic interference due to the the wires going to power distribution board. I am getting 50% interference at 55% throttle. That’s the reason why there is a provision for an external Magnetometer. But since I am trying to get the cost of the whole copter down, I will figure out first how to do without an external one. One idea is to use a ferromagnetic sheet between the APM and Power distribution board and create a magnetic shielding which will reduce the intensity of magnetic field lines from the wires, near the APM. It will be extra weight of course but not sure how effective it will be. Hmm..  will need some calculations. Other idea is to simply mount the power distribution board farther away from the APM, won’t do much change in COM position but will have to redesign it- not a big deal I guess. I will probably go with the later one; will post updates soon.