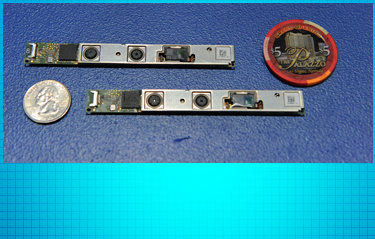 I thought this might be something interesting for potential UAV use since they are so small and light.

The first product bearing the compound name is the RealSense 3D camera. Intel describes the product as "the world's first integrated 3D depth and 2D camera module that helps devices 'see' depth much like the human eye," suggesting that this isn't just a substitute for Leap Motion or Kinect.

The camera does full-color 1080p and has an on-board sensor for gesture and face detection. The latter of which apparently helps it "understand emotions." It also recognizes foregrounds and backgrounds, so you can replace that messy room and make it appear as if you're Skypeing from the Moon. But, if you're looking for something more practical, you can also use it to scan objects in 3D using 3D System's Sense software. The RealSense 3D camera is set to be integrated into a number of diverse devices come the second half of this year, including tablets, Ultrabooks, laptops and all-in-ones, from top companies like Acer, ASUS, Dell, Fujitsu, HP, Lenovo and NEC. Seven such devices are being demonstrated today, and Intel itself has a demo unit.

Ham radio led me to UAV's in 2013.  Weird, right?  Well what happened was after spending 20 years as an IT tech and consultant, I decided that ham radio would be an interesting thing to learn.  RF is pretty fascinating, and even though the hobby may bring up images of "Old Men" sitting in their basement talking to a radio, it has a lot to offer these days thanks to modern technology and the internet.

How I got from ham radio to my first in-progress quadrotor build, is that studying for my ham radio license gave me a basic introduction to electronic components I simply haven't been exposed to at a granular level in my IT career.  As part of the learning process, you are introduced to the various components and circuits that make up radios, and at least for me, my interest was immediately piqued.

Ham radio is a very DIY hobby, with lots of neat homebrew projects going on, ranging from antenna design, digital modes to ham satellites in space and connectivity with the internet allowing even more people to get involved with long distance contacts and other activities.  Software defined radio (SDR) kits are amazing these days, and cost very little money compared to the higher end transceivers out there.  In short, the hobby may seem long in the tooth, but let's face it, RF isn't going anywhere, and we are surrounded by it today more than ever. All of this led me to start tinkering with an Arduino board, and setting up my own work space (pictured) for various projects.  I purchased my first soldering station, and a bin full of parts to play with.  Being interested in robotics since I was a kid, it didn't take long for me to learn about DIYDrones.com, and begin yet another learning experience.  I'm excited to be here, and I am jumping into the UAV rabbit hole to see how far it goes.  When I head outdoors, I'll be bringing my quadrotor, and my portable ham radio.