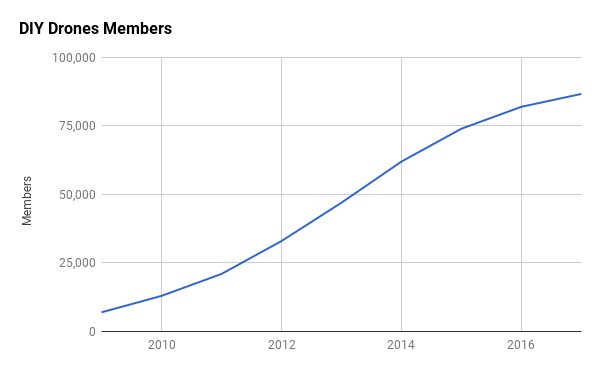 2017 was our tenth year, and since one drone year is like ten regular years, we're practically a century old! A few thoughts on the past twelve months:

More importantly, the two open source software projects that spun out of this community, ArduPilot/APM and Dronecode/PX4, are both going from strength to strength and are now essentially unrivaled in the full-stack open drone software market. APM is thriving with DIY'er (thanks to its developer-friendly "copyleft" GPL V3 licence) while PX4 is thriving with companies (thanks to its corporate-friendly "permissive" BSD licence).

Both are very active and have large developer bases. Below are the stats for the past month, where PX4 was slightly ahead, but in another month it could go the other way. Although I co-founded APM, I now only contribute to the Dronecode/PX4 project (professionally I can't use GPL code). But I'm super proud of them both, and when it comes to autonomous cars, where I'm still just a hobbyist, I use and love the ArduRover code when we're doing outdoors races that require GPS. 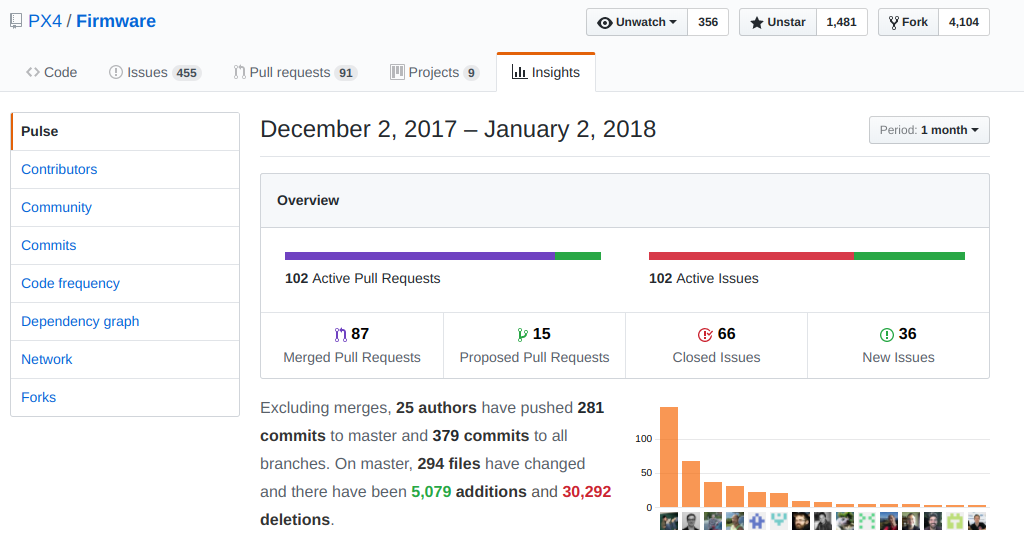 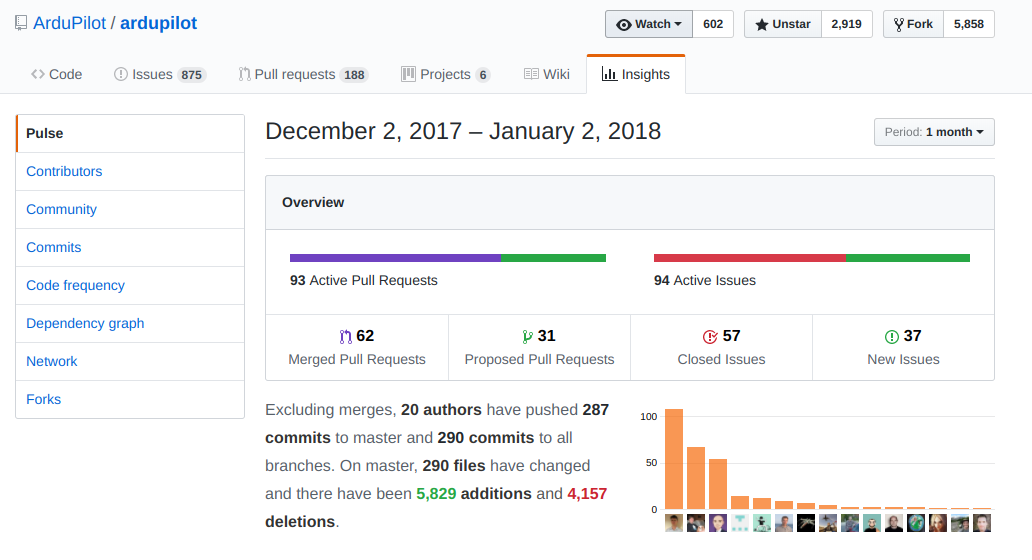 Elsewhere in the industry, the consolidation in the consumer space continued, with eHang the latest to leave and most others cutting prices dramatically as DJI's Mavic proves a hit.  (3DR was one of the first to leave the consumer market, last making Solo in 2015, which is a decision I'm happier about every day, as painful as it was at the time). I predict that prices and margins will continue to fall in that market, and DJI will continue to pull ahead with its more than 11,000 employees.

The commercial side of the market continued to mature, with most companies now having defined their industry verticals and partnerships and focusing on data quality and the analytical tools expected in pro-level enterprise software.  Most founding CEOs of the bigger commercial drone companies have been replaced by enterprise sales vets, including Airware, Precision Hawk, Kespry, CyPhy, and Measure. (Exceptions are Skycatch, Drone Deploy and my own 3DR -- we must be doing something right!)

It's fair to say that the DIY-centric era of the industry is now over, thanks to today's polished consumer and commercial offerings (we can take a lot of credit for birthing those!). A lot of the DIY energy has shifted to "drone" racing (not actually drones, since they're manually piloted), which does not require the sophisticated autonomy and full-stack software we focus on here. That said, there are still lots of students DIYing to learn how drones work and it continues to be a fun hobby so we'll be here for many years to come.

Personally, my professional life is totally focused on using drones in the AEC (construction) and GIS (geospatial) markets with 3DR, which had a record year as a software company in 2017. And now that getting drones to fly well is a pretty much solved problem, my hobby/DIY interests have moved to autonomous cars, where the technical challenges are much harder, from computer vision to machine learning. So I spend more time in our sister community, DIY Robocars, than here.  Ten years is a long time to sprint, and the early years here did indeed feel all-consuming. Now we're settled back to a more sustainable pace here, and I do my crazy hacking on things that have wheels, not wings and props.  Plus ça change.