3DroneMapping has been testing a PPK system for the past year to integrate into our daily workflow. The point of PPK (or Post Processing Kinematic) is not just to improve internal photogrammetric model orientations, but also is general recognised as a way of undertaking full scale surveys at the same accuracy but without having to place time consuming ground control points. 3DroneMapping setup a calibration site to test the claims made by the manufacturers and ultimately for our own quality assurance that what we publish is indeed right the first and only time.

Ground control points traditionally have become a sore topic with RPAS aerial surveyors as they take time to construct, survey and verify. These points are needed in a much greater density than tradition aerial survey methods, due to the non metric cameras often used in RPAS. Locations where the terrain changes rapidly, homogenous surfaces, and densely vegetated areas all require a higher density of control points to assist the photogrammetric software to locate accurate ties points and stop the model from deviating. Undertaking a photogrammetric survey without control, can lead to disastrous results, as outlined in a previous article, “GROUND CONTROL VS NO CONTROL”

There are a number of issues with placing and surveying control points. The obvious one being that another piece of survey equipment is needed to accurately record the positions. This comes at a great cost as survey grade GPS systems can run into tens of thousands of dollars. Then the areas for the control need to be identified. These areas are often located at the fringes of the site to be surveyed as well as in the center. This means that the site needs to be traversed (often on foot) to place marks and survey them. In some cases it can take a few days to complete the marking for fairly small sites due to the terrain, vegetation, etc. Control points are also not permanent. They often go missing due to weather, theft for vandalism and cause problem for the surveyor back in the office when the surveyed points are not visible on the imagery.

Base station measurements in Zambia

Another problem with using control only for surveys using low level photogrammetry is that the consumer grade cameras used are not metric and are prone to distortion. While control can eliminate this to an extent, it is the areas between the control points that often are forced to fit alignment. This can lead to errors especially regarding heights.

Emlid has produced and excellent L1 only receiver that is sure to revolutionise the Small Unmanned Aircraft photogrammetry sector. Coupled to a decent camera with a good lense and sync cable, the setup allows you to undertake surveys to mean accuracies of less than 10cm. All that is required is a base and a rover (2 devices) that log the data for you in an easy to operate webviewer. No need for external communication radios, or fancy antennas, only a steady 5v supply like a battery bank.

PPK is setup to have an accurate onboard GPS system that records a high frequency measurement tracklog of an RPAS flight. The system notes every time the camera takes an image and logs it. Another GPS is setup on the ground to record satellite information during the flight. Using a fork of RTKLib, Emlid has developed their own flavour of this powerful piece of software that takes into consideration each time the shutter is trigger and records the position of that event. The timing of such an event is crucial, as a few milliseconds delay can translate to a few meters when operating at speed. The software compares the relative satellite positions between the devices, resulting are very accurate coordinates for each image captured.

The photogrammetric model generated from using PPK enhanced images gives a much more consistent and accurate rendering of the terrain. Tie points have a much greater certainty of intersection, speeding up the matching processes. This reduction in uncertainty means less resources are required, leaving an opportunity to increase the density of other processes like point cloud generation, geometrically verified matching, etc.

Trials for PPK testing for 3DroneMapping began 3 weeks ago with a test calibration site. Over 200 tradition ground control points were surveyed over a 780ha site, some of which were placed in very challenging positions that like close to tall structures, under power lines, close to dense vegetation and visibly homogeneous surfaces. The control points were placed over 18 months and maintained. The site was flown over a 3 week period with a number of flights and post production methods to determine the optimum settings and processing requirements. At the end, the most consistent and repeatable results were chosen for the optimised settings for the end survey requirements and RPAS setup.

Control points were digitised from resulting point clouds and orthophotos and compared to the previously surveyed. These positions showed almost no difference to the control as published. Areas that have previously been a problem for photogrammetry showed up even and consistent between surveys when drawing profiles or cross sections. The 200 control points varied only a few centimeters over the entire site giving a very accurate and tight model.

Control point close up of markings

The final fieldbook and comparison for the survey can be found here:
As a brief synopsis of the results, the maximum deviation of points was no more than 0.09m in all axis. This is an incredible result given the fact that the average pixel size of the resulting imagery was 0.045m. It is interesting to note that the average mean error in all axes is 0.00m! But this is meaningless as it is an average across the field. The maximum deviation measured between session as a profile or cross section indicated almost no shift at all, meaning that the data is consistent between sessions. This is close to impossible under normal operations with ground control points.

The aircraft used was a fixed wing RPAS carrying a Sony camera with fixed focal lense A total of 836 images were collected at 800ft AGL, with a 68% side and overlap. The test area is 780ha big and takes 45-55 min to fly at an average speed of 19m/s. The Reach was recording data at 14hz, GPS only. The ground survey completed with Leica GPS1200 checked measurements to 0.02m horizontal and 0.03m vertical accuracy with all points checked and meaned

What this all translates to is that surveys can now be undertaken with even less time spent in the field and can result in even more accurate and consistent data. But should you not place control at all? This is a bad survey practice as you are depending on only 1 set of data measurements. As a caution, we would still place only a few control points as a quality assurance test to prove to yourself and others about the precision of the data generated.
But you do not need to buy or hire a GPS for this as the very same Emlid Reach in the aircraft can be used to survey those control points just as accurately! 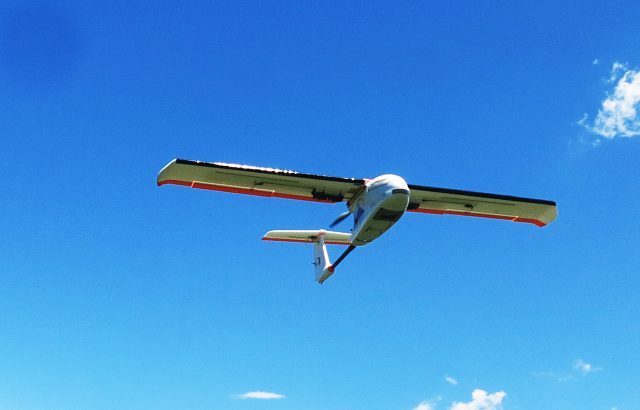