Thank you for your compliments and your general appraisal of our previous station builds. We've received dozens of e-mails and PMs both congratulating on our development in this field, but also asking for advice and help in DIY and semi-professional builds of similar field gear. There are no trade secrets here, we still know didley-squat, but we are always keen to learn, so please, feel free to contact us if you think we can help.

As a general message, most of our critics were encouraging us to come up with something more ready for general consumption, rather than just showcasing $$$$$ custom builds. We have had very much the same idea for a long time, but building up know-how, tooling and part sourcing for even limited series production takes quite an effort, especially from such a small team as ours.

Well, here you are. This is something that we think was really missing from all the available control equipment out there. It's a modular GCS that caters for both autonomous and FPV flight operations in general. It's based on the handiest of Peli case formats, the 1400. The stations and controllers we've seen so far were either built into an enclosure, or they were hand-held consoles with bits sticking out and wires hanging about, regardless of whether they were carefully designed or just DIYed together for practicality.

The plus side of installing any field gear in a rugged industrial enclosure is that it doesn't need a case to carry it around, and it can be all up and running without too much field installation work. The minus side is the added weight and the extra dimensions of such a system. Hand-held controllers on the other hand are nearly always delicate pieces with the joyticks and toggle switches prone to bend or break off, not mentioning the LCDs, which are the flimsiest parts of all instruments. That is why I always thought that a truly portable and lightweight controller must be self-contained, yet wearing a second protective skin that fits it like a glove. For this to happen, first you have to pick the right glove, then fit the instrumentation right into it. This is mostly because it is nearly impossible to create really tough enclosures in small series, whereas we already have some idea of how to build the internal container.

The current system is made up of two Peli 1400 enclosures, one of them being the telemetry computer, the other containing the direct FPV control tray and all small accessories, like antennas and cables. This is our custom rugged industrial computer outfitted specifically for UAV operation. We have been making various versions of it for hazardous areas and other serious field applications, but now it's part of our UAV control gear. The features:

As DroidPlanner already looks like a viable option for full blown autopilot programming and telemetry with APM/Pixhawk, we also build this with cheaper Android Tegra hardware to very similar physical specifications. The screen is then a 10" 1920x1200 IPS panel with the same 600 nit brightness, although the Android type doesn't have a Wacom® digitiser, there's only the touchscreen. However, we install a capacitive stylus in the holder for similar reasons, namely for more accurate points and less smudges on the screen, but it also helps when you're wearing gloves. 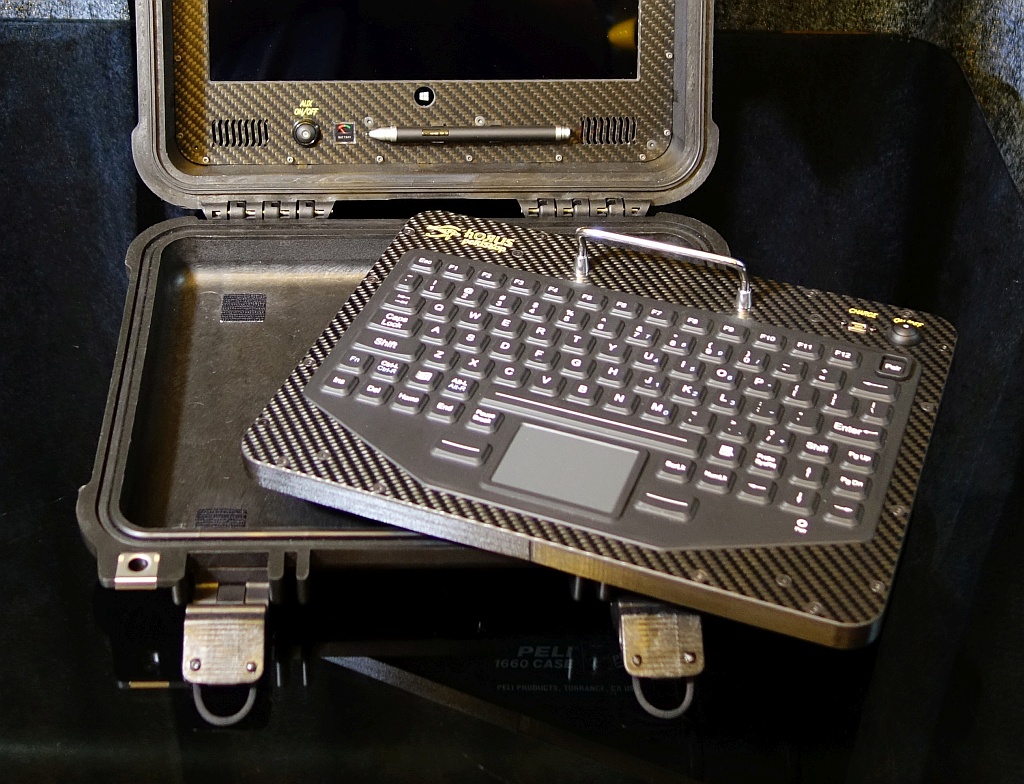 The Bluetooth keyboard/touchpad combo is a fully sealed industrial beauty from iKey, and it is removable from the tray when not needed, just to be replaced by the pilot FPV tray or the cameraman's tray for a seated operator. There's of course our customary mounting plate installed at the bottom of the telemetry case for a tripod or dashboard mount.

This prototype again is set up for APM/Pixhawk operation, hence the rotary flight mode switch. The payload layout and the controls are configured for full function camera control, including absolute and relative pan-tilt micro joystick and tilt pot, separate focus/shutter, zoom, video start/stop switches. We've built a very flexible CAD model of the controller, just to be able to accomodate many different control layouts for the individual client. 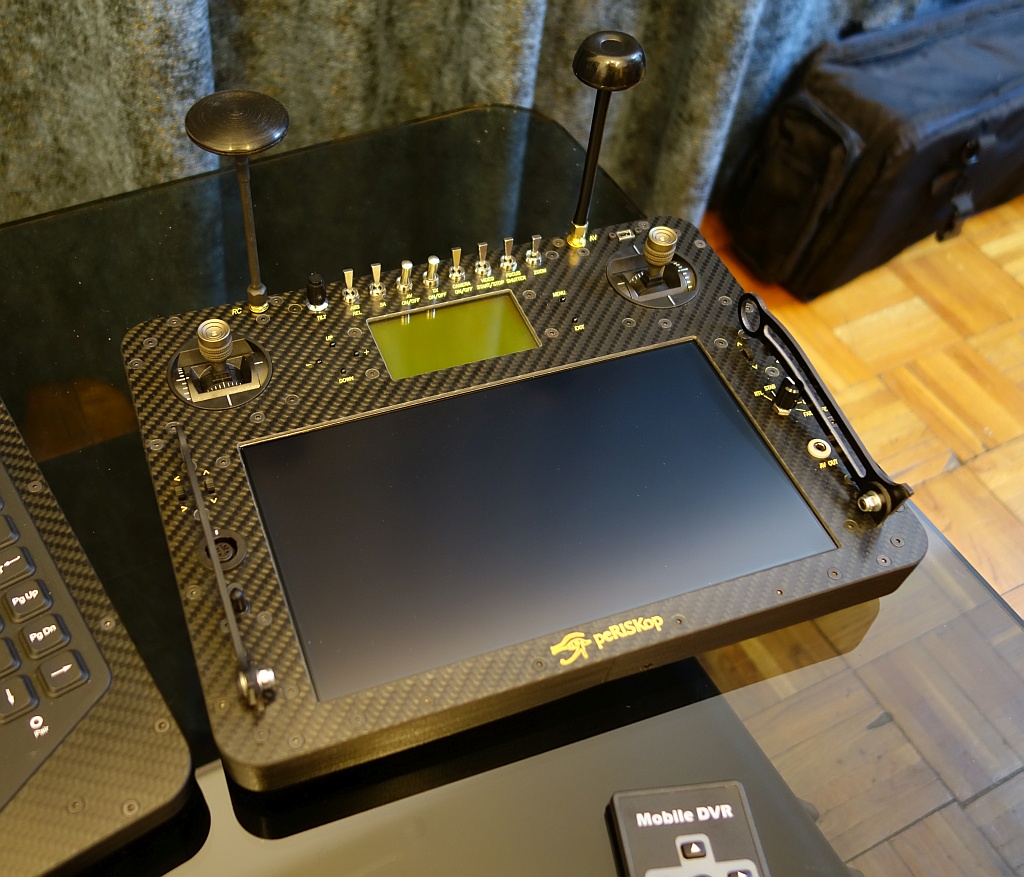 These controls are only standard dustproof types, but we can also make the entire tray IP 65-67 level waterproof, just as the telemetry PC is right now. Conversely, we can also supply the telemetry case with no IP, but since it has a slightly different industrial lineage, it seemed like a waste to dumb it down... Even though there's an awful lot of electronic and RF gear under the hood here, there's no sign of signal interference, nothing, it just works. It's also very solid mechanically. The side flexibility in the CF folding brackets is just perfect for a cross type harness fit, while keeping the tray absolutely firm on your belly, thus providing a stable "desk" for precise control of the sticks. The ergonomics behind the different screen installation is due to the fact that you can only work with a transflective or reflective screen in the horizontal position out in the sun. There is no way for any high nit screen to match the impact of direct overhead sunlight at such a straight angle. For the telemetry console the more upright 114-117° angled position of the screen makes it possible to use the body of the enclosure as a hood, which in turn makes the use of high nit IPS screens in a deep recess possible.

Certainly, we could install a Windows or Android tablet in place of the transflective screen in the FPV control tray, but currently there are no such tablets available at any reasonable price in the market. Apart from their cost, the few rugged pieces like the Panasonic or the Getac tablets are already quite heavy, and they still need extensive customisation for UAV field operations, which would make them even heavier and bulkier. We've seen some high nit tablet integration attempts for similar control tray assemblies lately, but they only look good and work until they meet their match, the Sun.

We've been using and installing quite a number of different transflective screens for direct sunlight operations. This FPV tray can take any size of them between 5.6" and 10.1". Naturally we wanted to see whether we can install the biggest one in the prototype and it works...

There are, of course, many possible further variations and evolutions to this system, some of them already thought of by us, some of them will come from you, I'm sure.