Here is a description of a Variable Pitch Blade Quadrotor build with some unique features. It is a large Quad, and can be quickly split into 2 halves, enabling easy packing into a carry case for simple transport. The ‘Upper’ half of the quad contains all the electronics, IMU, Autopilot, Payload control electronics, etc. The lower half carries the battery packs and the payload. The upper and lower halves slot together and are affixed by means of 4 captive spring release screws. The payload similarly mounts to the underside of the lower body half. The entire Quad can then be separated into an upper and lower body half, and payload.

Each motor has a standard ESC ( not any fancy hi-speed update type…) mounted beneath the motor. This keeps the 3phase motor leads very short, ensuring little electrical noise radiation from said leads.. Beneath each ESC is a small CPU module which receives a serial command from the Autopilot. This serial command contains the desired motor speed, the blade pitch angle, and the rotor tilt angle for Yaw control. This small CPU module generate the relevant PWM signal to the blade pitch servo, the rotor tilt servo, and to the ESC, while monitoring the motor RPM, ensuring constant motor speed, as commanded.

The upper half of the Quad has 2 Variable pitch, variable Tilt, same direction rotating rotors. The lower half has only two variable pitch same direction rotating rotors fitted. The motors are operated at commanded constant speed, and lift is varied by blade pitch, giving much faster control of individual blade lift for stabilization. This is a problem with conventional control by motor speed variation, as the rotor blades become larger in diameter. The inertial mass of the rotor increases, and it becomes increasingly more difficult to rapidly change rotor RPM, both to enable horizontal stabilization, and to control Yaw.

The Tilt rotors are both fitted to the upper half of the Quad, with the rotors spinning in the same direction. This ensures that when the rotors are tilted ( always in the same direction) to control Yaw, Gyroscopic Precession is equal and opposite across the two rotors, thereby canceling out. Gyroscopic Precession also begins to play a bigger role in larger diameter rotors, when the tilt rotor concept is employed.

The construction is almost complete. So far all simulations and math shows we should have around 2.5kg lift per rotor head, with an all up Quad weight of 5.5kg, inc 2 of 6cell, 6000mAH batteries, leaving around 2kg for payload. We should get around 15 to 18minutes flying time.

If it looks like it came out of the ALIGN Factory, it did not…I used parts from the Trex600 series chopper, the tail rotor pitch assy, etc, as well as tail boom, stays, and a few more bits and pieces…The composite parts were all modeled in 3D CAD, and molds made for them. All the custom Aluminium parts were likewise modeled and CNC machined.

Variable pitch on all 4 blades.

Just running out of space for all the aircraft here!, Guppy, Hornbill, Kiwit, all the 60 trainers, ……Need some sky-hooks! Cutting out lightening Holes on the CNC: 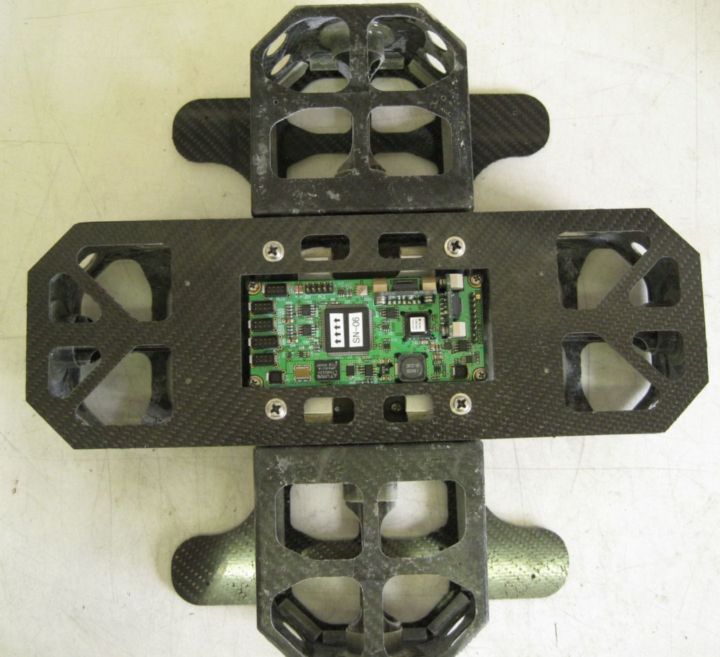 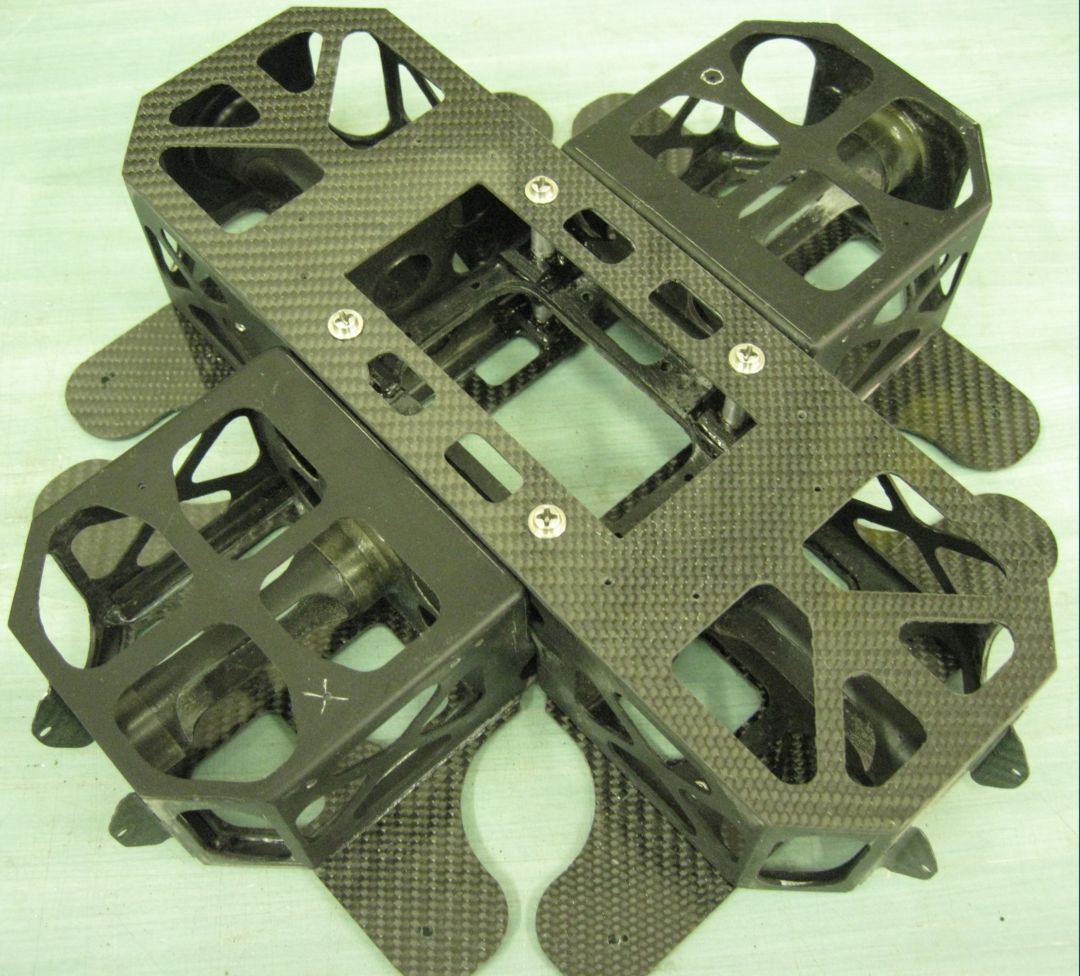 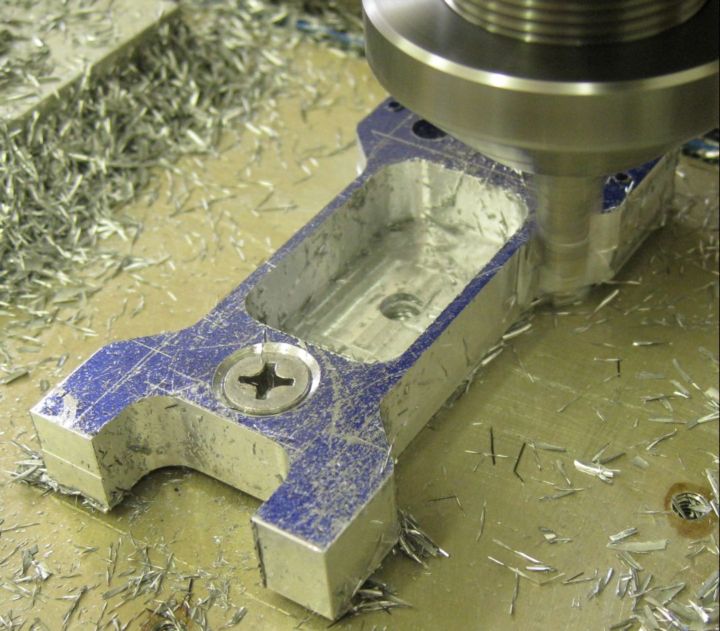 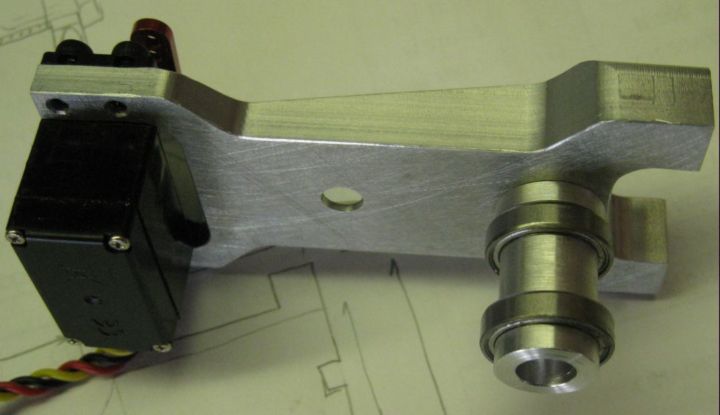 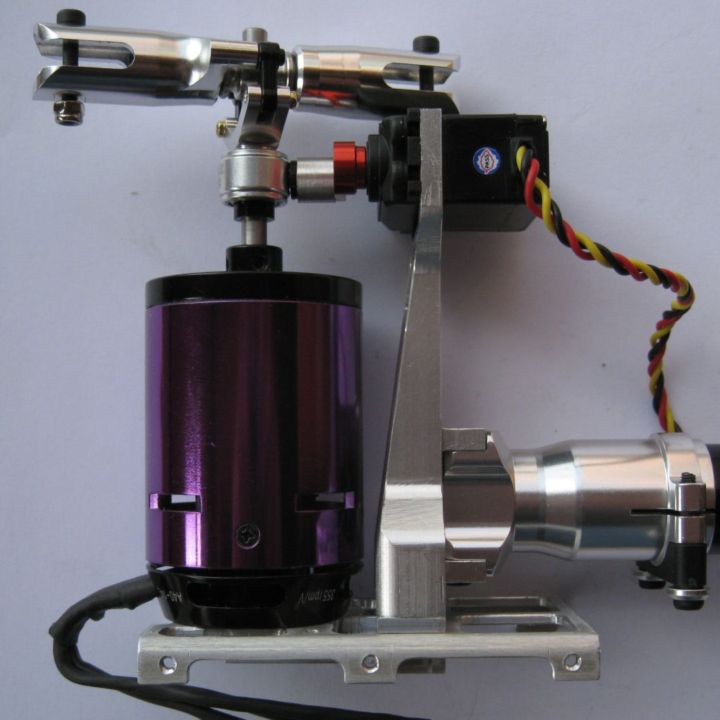