AirbotServices fixed wing is based on the well known XUAV Talon EPO frame. This plane has a standard wingspan of 1720mm . Although its wings are quite wide (total wing surface is 60 dm2 - much wider than most other EPP/EPO frame), when fully loaded with cameras and large batteries, the plane's all-up-weight can reach more than 3 Kg.

As a result, in this standard wingspan configuration, the Talon requires to maintain a quite high airspeed not to stall, and also to use long and large landing spaces.

Therefore we wanted to test and try the optional (should be mandatory) wing extensions. These extensions increase the wingpsan to 2 meters.

-Pixhawk with APM:plane version 3, geofencing enabled (this is a great feature by the way!). See picture showing the geofence and one rally point in the field: 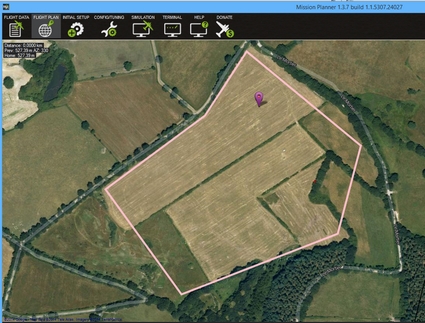 -T-Motor 3510-700Kv, 13x8 Graupner prop (that gives a 1Kg of thrust at 50% throttle which represents at least 30% of the total weight of the plane, as recommended by the specifications)

-Mobius camera in front dome (no gimbal - hard fixed, therefore some jello in the video)

As a result of these wing extensions, we were amazed how slowly we could fly (less than 20km/h without even stalling), maintaining a relatively good maneuverability. But we were even more suprised on how easy it was to land, on very short distances.

We have discovered and played succesfully with a "discovered by chance" landing method, batpized "cork screw" landing, which consists in slowly descending the plane in a spiral (very low throttle) to the ground which provides a way to land in a small surface area (for example if you do not have a runway at your disposal). Contrarily to what you could think, this method, using the wing extensions, is not reserved for experienced pilots; I am myself an utlra noob Arduplane pilot (actually my first flight...).

Has anyone else played with APM/Pixhawk alternative landing methods (like triggering a chute, for example ?)