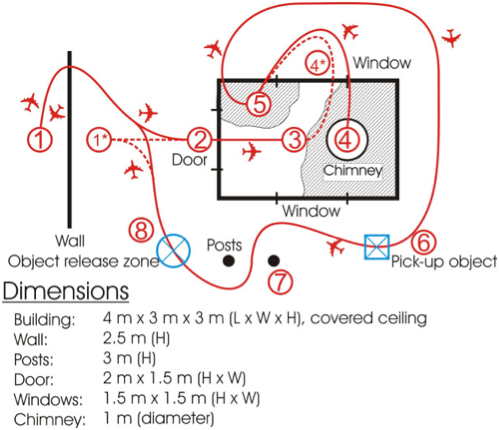 IMAV 2011 is May 23-27 in Huntsville, Alabama. There are two autonomous competitions--Indoor and Outdoor.

Like the indoor flight dynamics competition, the indoor autonomy competition is open for all categories of MAV. The main goal of this competition is to demonstrate the MAVs capabilities of fulfilling a sophisticated mission including operation inside a small building with a covered ceiling. A video transmission from the MAV to a ground station is required for this mission. All tasks must be attempted in the order listed in the paragraph below.

The mission starts at point 1 behind a wall with a height of 2.5 m preventing the operator from seeing the MAV on the mission. Having overcome the wall, the MAV approaches the door at point 2. After entering the building, the MAV has to identify two targets (printed letters/numbers) at point 3. One of them is placed on one of the building's inner walls (vertical target), the other one is placed on the floor (horizontal target). See Figure 2.

This competition is open for all categories of UAV. During the outdoor autonomy competition the MAV has to identify a horizontal and vertical target, which are placed outside of the operator’s range of sight, fly through one arch, drop a ball at a certain point and land in a predefined area.

The MAV takes off from the airfield, passes the airfield buildings and heads toward the first target area. In this area two optical targets have to be identified. Once these targets have been identified, the MAV proceeds with flying through Arch A or Arch B (Figure 5 shows the two arches and the mission points for the different gaps). Only one passing counts. The positions of the arches are defined by WGS84 coordinates. Subsequently the MAV flies to the drop zone, where it drops a ball, which is shown in Figure 6. Finally the MAV lands in a predefined area on the airfield. 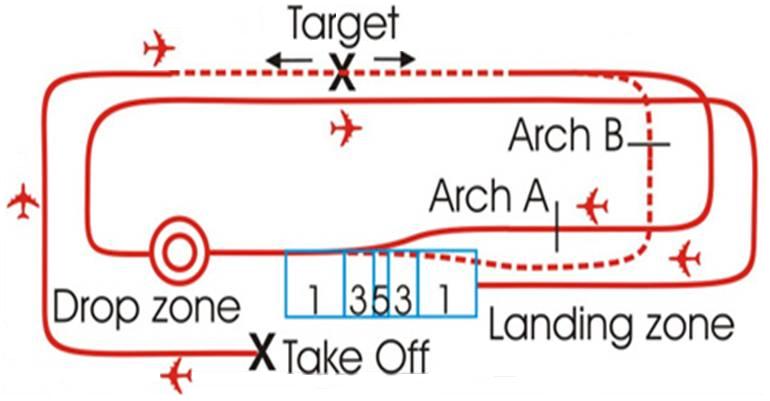