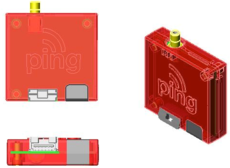 This article explains how to attach and configure a MAVLink based ADS-B receiver by uAvionix called PING™. Please visit their website for technical specs including RF characteristics and connector pinout.