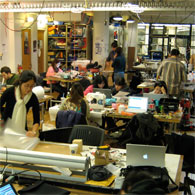 Flying robots, aka Uninhabited Aerial Vehicles (UAVs) or drones, are growing in number and influence in military use. In parallel, the hobbyist community is developing DIY methods, making flying robots more accessible to more people. What is yet to become common is for these DIY aircraft to carry out visions rather than simply take pictures. This course aims to provide the conceptual and technical foundation for using flying robots for visionary purposes. Here, technology is the tool. The air vehicle is the paintbrush, the poster, the camera; visible to some degree but not the purpose. The first step is to strip down the employment of a flying robot to its essence, as a means to gather information or take action at a distance, using an autonomous agent. The group will discuss and expand the current thinking on feasible, worthy objectives for flying robots, from art to science, from observation to communication, from performance to activism. Throughout the course, these conceptual topics will be a backdrop for hands-on projects using accessible technology.

The projects will investigate:

The projects will be performed in small teams and will require conceptualization, system design, and mechanical, electrical and coding work. The types of small aircraft could include quadcopters, blimps, planes, or less conventional platforms. Flight controls will be done using the Arduino-based ArduPlane and ArduCopter, or other embedded computing platforms. The online DIY/hobbyist community will be used as a resource. Each week, class will include a brief lecture and discussion followed by demonstration and debugging of projects.