As a response to the requests for details on cost, etc + photos, here goes:
KDA 20-20L ($12.88) x 4: $51.52
http://www.hobbycity.com/hobbycity/store/uh_viewItem.asp?idProduct=2048
HK SuperSimple 18-20 ESC: x 4: $31.20
http://www.hobbycity.com/hobbycity/store/uh_viewItem.asp?idProduct=6548
Zippy 4000 mah 40C battery: $24.74
http://www.hobbycity.com/hobbycity/store/uh_viewItem.asp?idProduct=9957
Zippy 500mah 20C battery: $6.43
http://www.hobbyking.com/hobbyking/store/uh_viewItem.asp?idProduct=6520
Optional, but I like having a separate flight pack as opposed to powering via an ESC. It may be superstitious, but I'd really hate to have a brownout mess with my APM in flight.
HK-T500 Landing Gear: $3.78
http://www.hobbyking.com/hobbyking/store/uh_viewItem.asp?idProduct=9535
Mikrokopter 500mm frame: $72.95
http://www.nghobbies.com/cart/index.php?main_page=product_info&cPath=122&products_id=249
The MK frame is pretty pricey, and replacement aluminum riggers are pretty spendy. This will definitely be a step up with the Arducopter frame, when released.
Oilpan: $159.95
http://store.diydrones.com/product_p/br-0012-01.htm
Ardupilot Mega: $59.95
http://www.sparkfun.com/commerce/product_info.php?products_id=9710
Break away headers: $4.95
http://www.sparkfun.com/commerce/product_info.php?products_id=10095
APC 10x4.7 Slow Flier x 2: $5.86
http://www.bphobbies.com/view.asp?id=V766841&pid=S115145
APC 10x4.7 Slow Flier Pusher x 2: $8.78
http://www.bphobbies.com/view.asp?id=V766841&pid=E3174966
Spektrum AR6110E: $49.99
http://www.horizonhobby.com/Products/Default.aspx?ProdID=SPMAR6110E
Radio Shack Project Enclosure: $3.99
http://www.radioshack.com/product/index.jsp?productId=2062281
JST Male connectors x 10: $1.99
http://www.hobbyking.com/hobbyking/store/uh_viewItem.asp?idProduct=9682
JST Female connectors x 10: $1.55
http://www.hobbyking.com/hobbyking/store/uh_viewItem.asp?idProduct=9683
F/F Servo Wires x 8: $12.00
http://store.diydrones.com/Servo_Jumper_Female_double_sided_5_cm_p/pr-0003-03-5cm.htm
I made these myself with some bare-end female servo cables from Hobbyking. But these are better :).
Optional Xbee
Adafruit Xbee adaper: $10.00
http://www.adafruit.com/index.php?main_page=product_info&products_id=126
Xbee Explorer USB: $24.95
http://www.sparkfun.com/commerce/product_info.php?products_id=8687
Xbee Pro RSPMA 900mhz: $44.95
http://www.sparkfun.com/commerce/product_info.php?products_id=9099
Xbee Pro 900mhz Wire Antenna: $42.95
http://www.sparkfun.com/commerce/product_info.php?products_id=9097
F/F Jumper Wires: $4.50
http://www.sparkfun.com/commerce/product_info.php?products_id=9389
For connecting the Xbee to the Oilpan...
Total of the above: $614.98
I'd highly recommend getting an Xbee setup, since there are issues with blowing outputs on the APM when connecting speed controls and USB at the same time. That means that tuning PID values and testing is a MAJOR pain, since it requires unplugging your ESCs every time you want to plug in the USB. With Xbee you don't even have to open the electronics housing to make changes. Plus you get to look cool because you bring your laptop when you fly :P.
I also made some super-short servo extensions for my ESCs that have the voltage line cut (the red one). This prevents the ESCs from providing power to the board, since I wanted to use a separate flight battery. I found out afterwards that this may be also done by removing a solder jumper on the APM? If so, oh well... I already made the extensions.
There's a few other miscellaneous bits and pieces, such as Deans connectors for the main battery, and rubber grommets and nylon bolts that I bought for vibration isolation for the electronics platform. You can see those between the box and the platform in the pictures below. It's tough to say if they are effective or not yet, because I was having major vibration problems on my aeroquad setup (same frame, just a different box), and I haven't re-tested the aeroquad stuff after getting arducopter finished. It may just be that the Arducopter gyros and accels are less vibration sensitive. It can't hurt, though, and the Mikrokopter frame itself doesn't do much for vibration if you directly attach the electronics to it with the nylon standoffs.
This is pretty much the exact set of gear that is on my quad... Probably way more than anyone here wanted to know :).
Photos 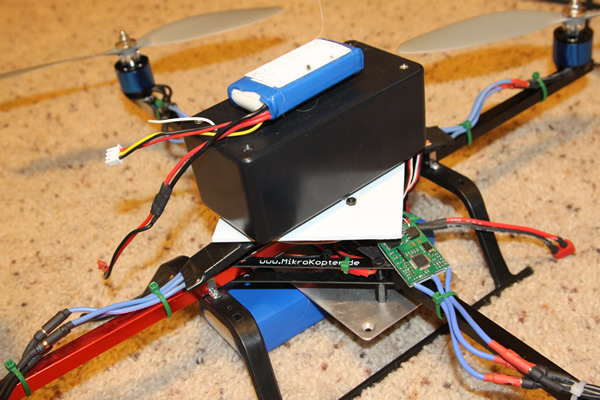 Tags: arducopter
E-mail me when people leave their comments –
Follow