A few weeks ago the new version of the free Visual Micro addin for Visual Studio was released. The addin provides full featured, 100% compatible, arduino development inside all Visual Studio 2008 and 2010 versions (except for express). This release means that we can code, compile, upload and burn bootloaders to any Arduino microprocessor using Visual Studio. Arduino for Visual Studio can be downloaded from here

The addin provides complete compatibility with all arduino libraries and cores, in addition to intellisense, goto compiler errors and many other useful features. One useful example is the "Auto Pause" and "Auto Resume" of serial before and after upload (unless using ISP). Compiler #defines are shown clearly in all source code. A high speed compiler uses file modification times to optimise the work required. Below you can see that an arducopter compile was completed in 5 seconds. An unlimited number of serial tool windows are available. 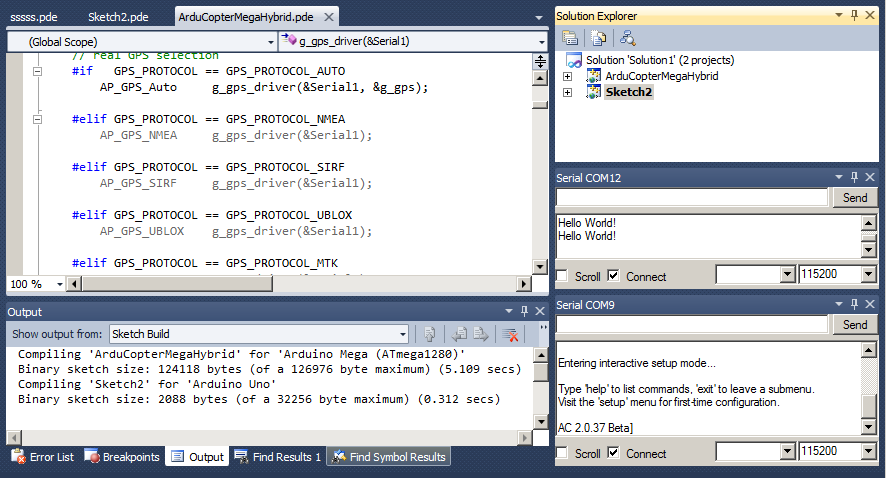 Note:  The ArduCopterMegaHybrid project is a full arducopter program with a minor change to the "pwm out", it's switched to i2c for the SD21 servo board. This project is not available for release it just happened to be available to demonstrate the speed of the visual studio arduino compiler

There are a few un-documented features still to be tested. One, for example, is an option to switch on support for parent library folders. This might be useful for diy drones projects that require two different versions of the same library. The feature allows the compiler to look for an additional "Libraries" folder in the parent folder of the current sketch.

Another feature we might find useful is a menu command that toggles all related sources in/out of the current project. "Project>Show All Arduino Files" does not affect sketch compilation, instead, this feature includes the sources of the arduino core and all of the libraries that have been "#included" into the current sketch. This makes is very easy for library developers/explorers to optionally work with libraries and core within their sketch projects.