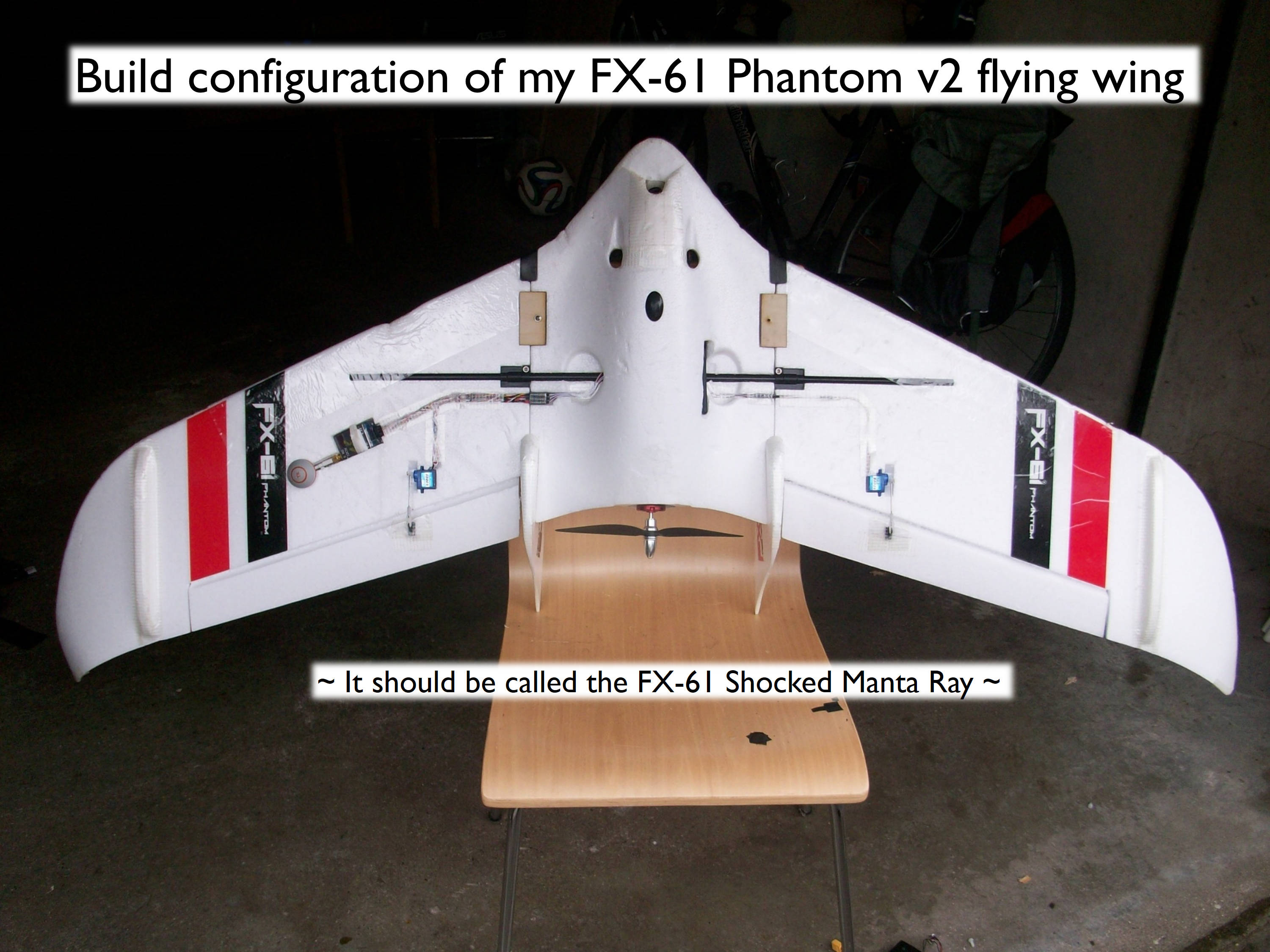 The whole reason for me to get this plane was to get started with autopilots. I have chosen the HKpilot32, a pixhawk clone that comes with the same accessories as the pixhawk and a 4GB microSD installed. 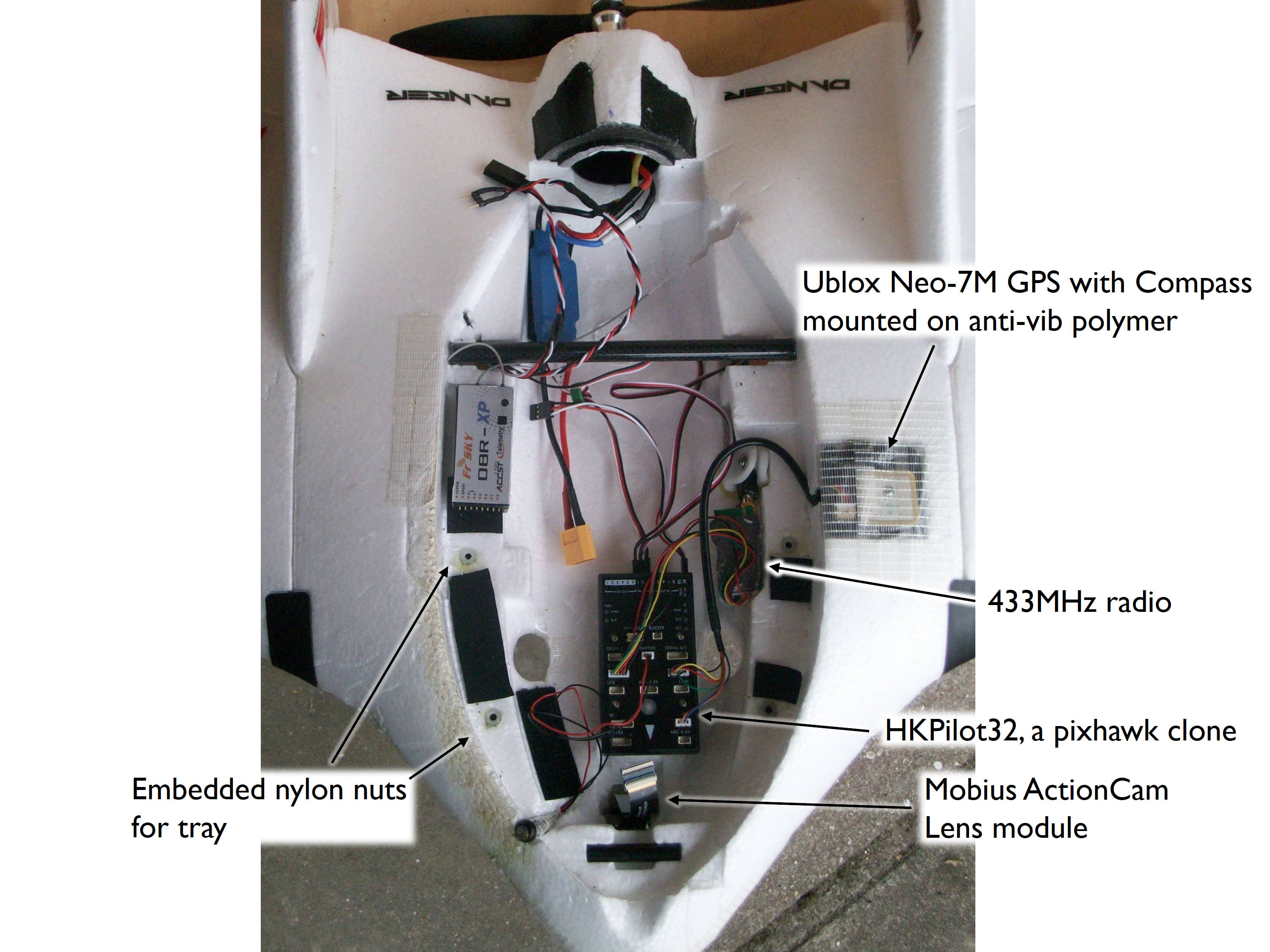 The GPS + compass module is mounted on an anti-vib polymer that is marketed by Specialized as ‘Bar Phat’, a vibration damper for bicycle handlebars. The Mobius camera lens module is also loosely secured using bar-phat for anti-jello, and not fixed firmly so that it can pop into the fuselage if hit.

The embedded nuts are used to fasten a tray that goes over the pixhawk. I should have used metal nuts because if the nylon threads are stripped, I am screwed since the nuts are epoxied in. 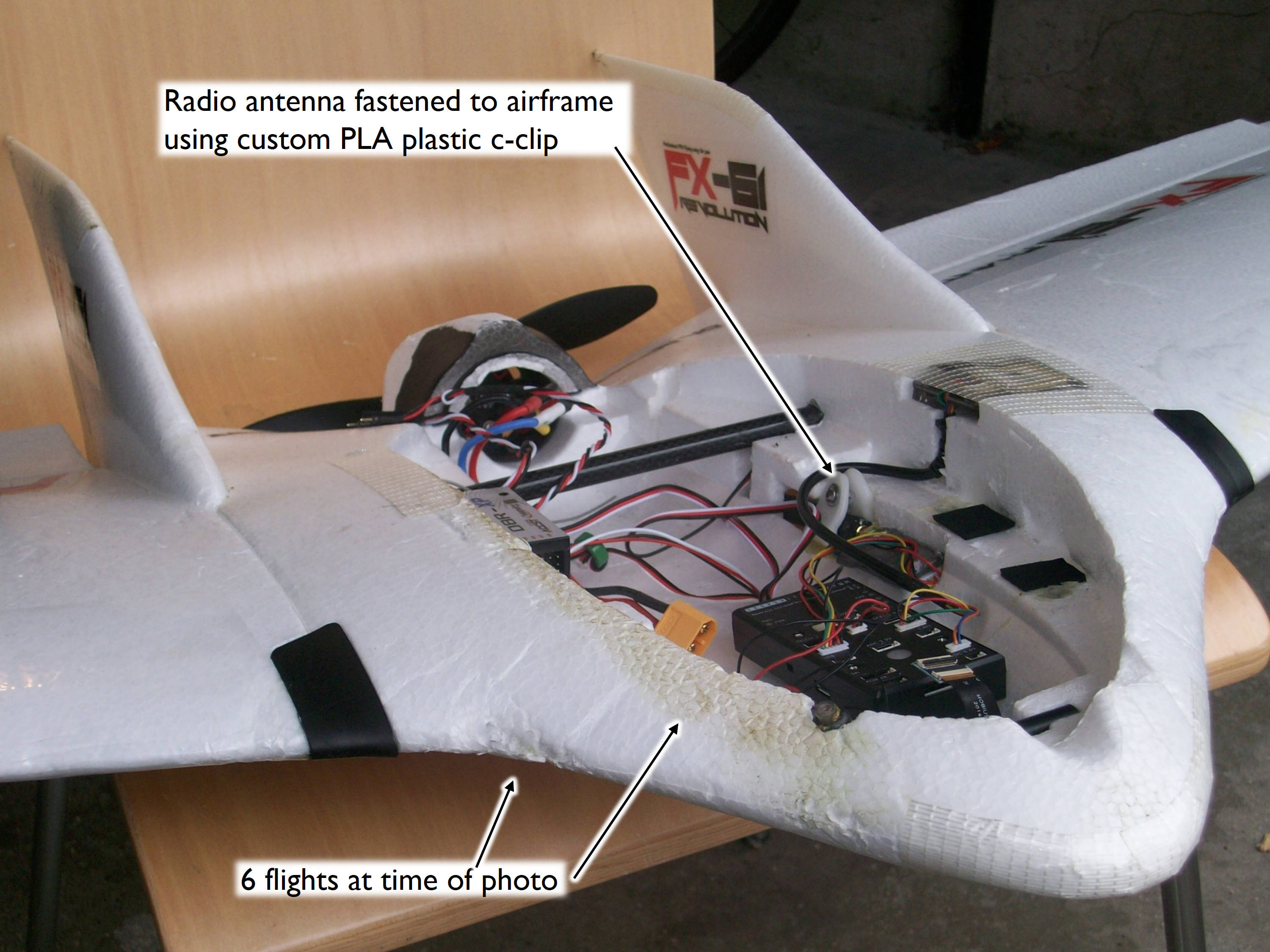 The PLA plastic is marketed as Polymorph, and is a granular plastic that melts into a malleable mass when submerged in hot water. Great for making funny shapes like antenna root clamps. The radio PCB is floating, supported by the antenna. I tried fixing the PCB using 3M VHB tape and leaving the antenna floating, but the tape kept detaching.

Note on 3M VHB: it is a spectacular double sided tape, but the full strength is only realised if your apply about 15psi pressure for a few hours – I'm too cautious to clamp a PCB to some foam with that much pressure. The carbon tray was freehand cut with a dremmel clone. It opens up a lot more space, leaving the whole rear volume clear. In my opinion, it’s important to have the payload area at the centre of gravity, so I don’t waste time balancing the plane when I add or remove a payload.

The VTx (video transmitter) is powered straight from the balance port, which I learned is a great way of RUINING your battery. I crashed into a tree and everything stayed intact, so the VTx carried on sapping power and drained my battery down to a few mV, since it doesn’t have undervoltage protection. So that battery is now a flammable paperweight.

I also learned the hard way that the arming switch will become gummed up with glue and seize if you just throw it into a gluey hole. So after a number of years with a scalpel I picked all the glue out, wrapped the switch case in tape then glued it again. It’s fine now. The fantastic Mobius camera has been a very pleasant surprise, especially considering the cost. The fact that you can extend the lens module out of the main camera is very nice! I have the camera set up to start recording & outputting video as soon as it receives power, which is ultimately from the pixhawk power module which I trust far more than the horrible noisy stock ESC. 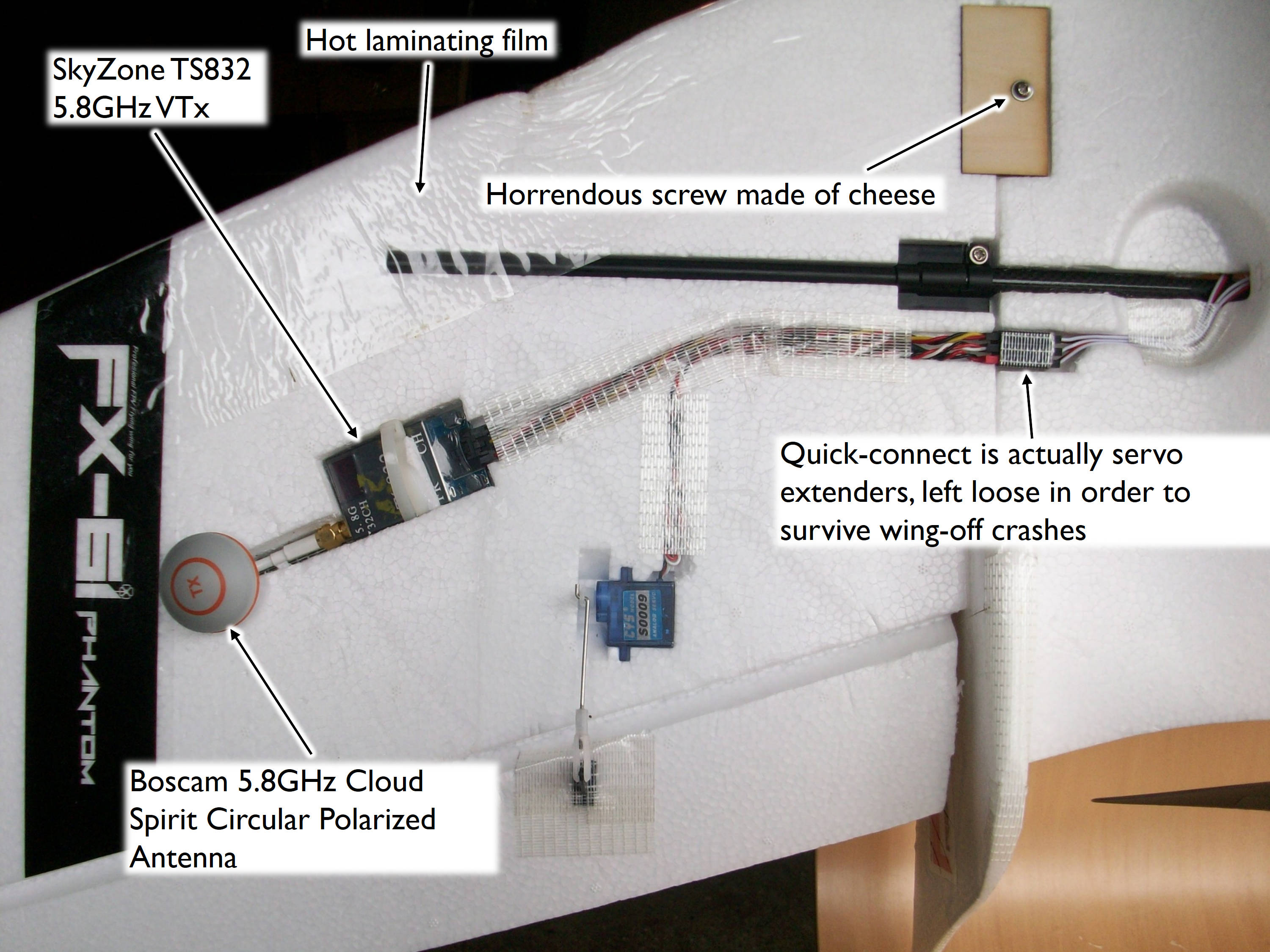 The Phantom v2 now has detachable wings, but the attachment solution is not elegant at all. In fact, it’s horrible! The screw is hard to align, plus it’s made of rubbish playdough steel. Needless to say, the blind nut which the screw goes into became detached, sigh -.-’ I will replace it with a chunky nylon screw ASAP.

I made quick connects using a bundle of servo extenders. It works okay-ish. The connectors are too tight to disconnect 3 at once, so I have to manually plug/unplug each one. It’s no big deal, but it’s not the simple snap-in dream. There are good multiplex quick-connects out there, but they don’t have enough contacts for a servo and a VTx. Next time I will try DSUB connectors with a locking latch.

Note the connectors are loosely held in place so they are free to move in order to survive wing-off crashes.

The VTx is cable-tied to an embedded carbon rod on the suction side. It does not lie straight on the foam, there are spacers to create an air cavity. I thought I would build an air cavity in in case I discovered the VTx gets too hot. If that turns out to be the case I could vent the cavity for some cooling flow.

The circular antenna protrudes, but not lower than the wingtip skid so it shouldn’t be a problem. I actually spent a long hangover-ridden Saturday thinking about antenna placement. I wanted to protect the antenna. The wing suction side must stay clean to keep me happy, so I thought about putting the antenna near the tail to keep it protected, but that would be too close to the other electronics. I decided the current location was the best. I chose the spanwise distance by figuring out the maximum rolling moment I could balance with just the offset battery, because I hate adding unnecessary weight (i.e. balance weights on the other wing tip). Instead of digging a cavity for the VTx, I simply cut a whole chunk out of the wing, cut that core to the right shape, then glued it back in. I am pleased with how clean the VTx installation is, the only protrusion is the cable tie.