Continuation of my FX-61 Phantom build configuration. (this part has the BoM at the end) The other wing is just stock. Look at that horrible stock servo, it’s transparency only serves to taunt me by showing the horrible plastic gears that are dying to eat each other to bits. I would like to change them ASAP – safety-wise I really think they are the weakest point in the whole system.

The 433 telemetry radio antenna folds flush with the body. Extending it does not increase the RSSI but it looks cool, and looking cool is just as important as flying well when you’re impressing people at the park. As much as I dislike adding weight, fibreglass tape definitely buys its way on-board! It seems that every single edge that I didn’t tape now has a dent on it :\ Taping the wingtips and rudders is essential. I always seem to bash them during transport. I laminated the LE (Leading Edge) with strips of A3 hot laminating film using a household iron. It’s not easy to get it on without damaging the foam with the heat (it bubbles up like orange peel if it gets too hot). For that reason I only did the straight sections, and will fibreglass tape the curved outboard LE section.

Ideally, about 20% chord from the LE is laminated with film and then the LE radius is covered in fibreglass tape. Alternatively, don’t crash.

The TE (Trailing Edge) never gets damaged on my aircraft. 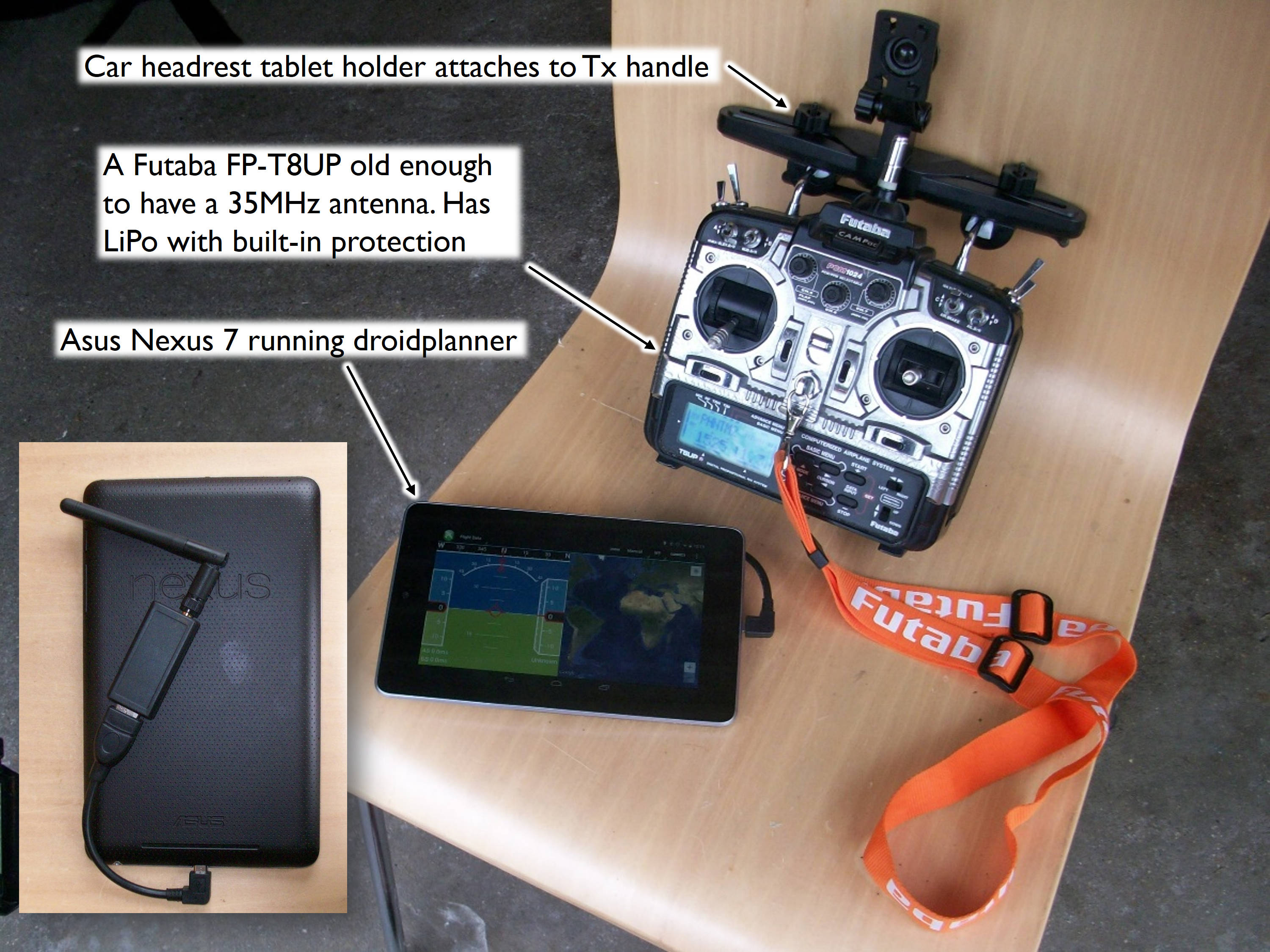 I use a second hand Futaba FP-T8UP, and I love it. Great build quality. It only has 7 custom mixers, but I have not run out yet.

I don’t have a 3D printer or CNC mill so thought I would have to settle for a sub-optimal hack to attach my tablet to the transmitter. Surprisingly, a headrest mount attaches easily to the Tx handle and works very well. An hour of chin scratching whilst surfing the web can sometimes pay off it seems – the mount works great and was only £5.99 delivered.

I don’t take a laptop to the field. I plan my mission at home, then use an Asus Nexus 7 tablet for telemetry while flying. Droidplanner is okay, but annoyingly it disconnects when the signal is too low but doesn’t try to reconnect. I have to manually spam the connect button, and it’s getting annoying now. Is there a solution? 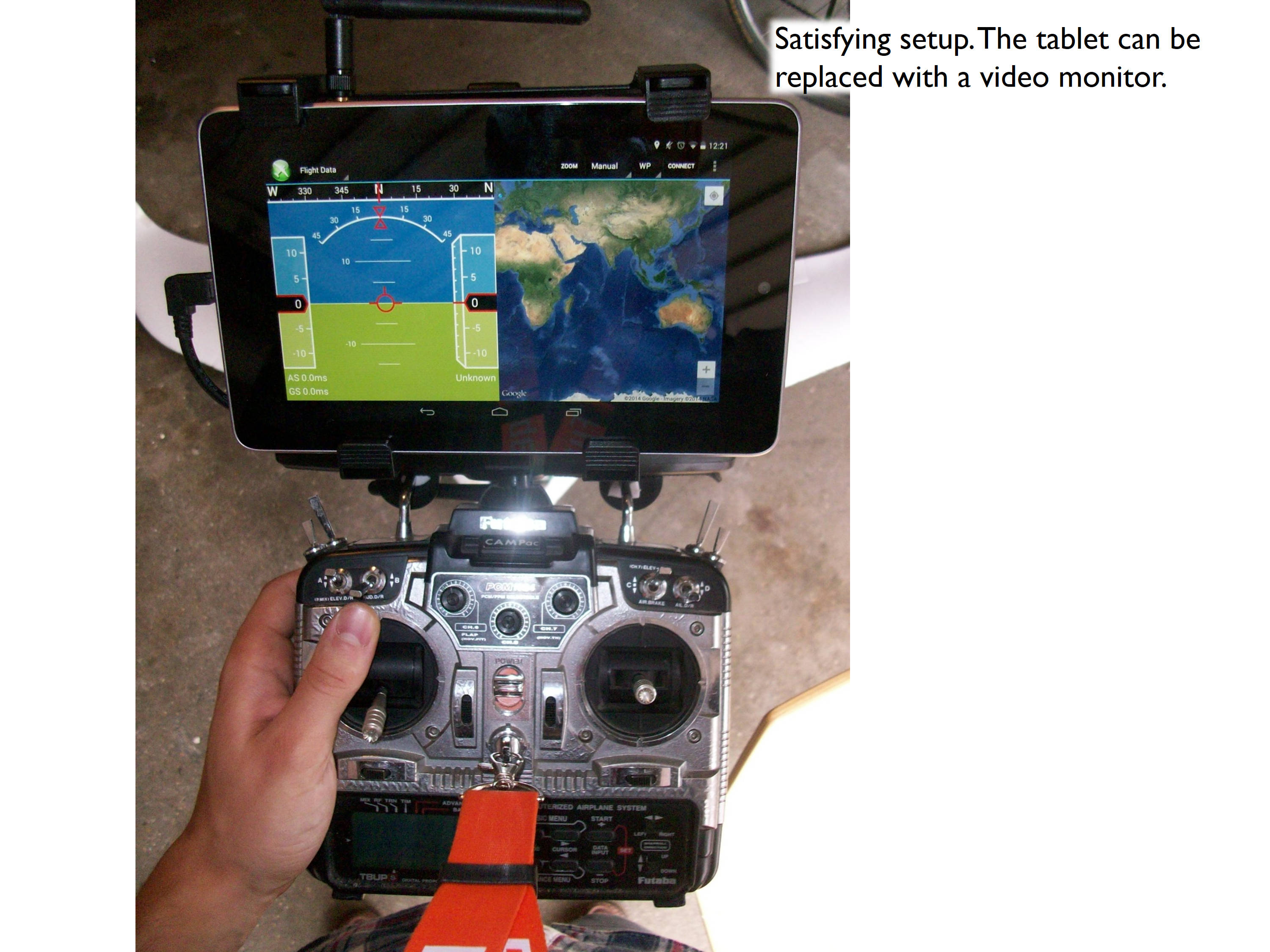 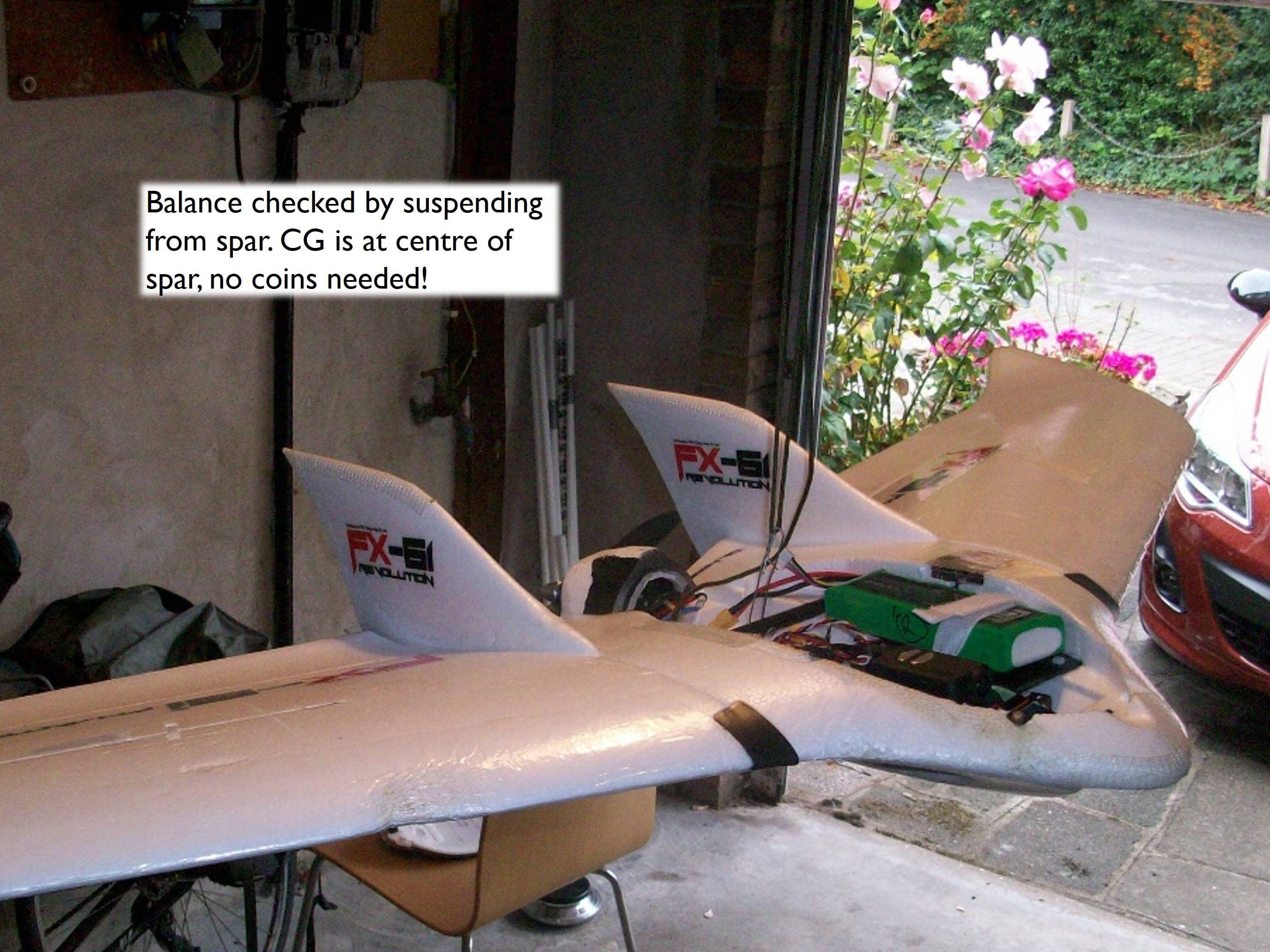 The plane balances nicely. CG is very sensitive to placement of the huge battery, but there’s plenty of space. Velcro is not enough to secure the battery, so I use squares of grippy pad on the tray to firmly stop the battery from slipping. With everything in (autopilot, video gear, no payload) it weighs 1350g.

Grippy pad is the rubber-like material marketed as a dashboard phone holder. It is truly amazing, you should get a bit just to play with it if you have never felt it. When it’s clean it sticks almost as well as sellotape when used on a smooth material like plastic. I use it to attach the radio to my tablet, because it’s not permanent and leaves zero residue.

I like to leave space in front of my battery so that in a crash it can slide slightly allowing the grippy pad absorb the impact rather than crunching into the nose and killing itself. 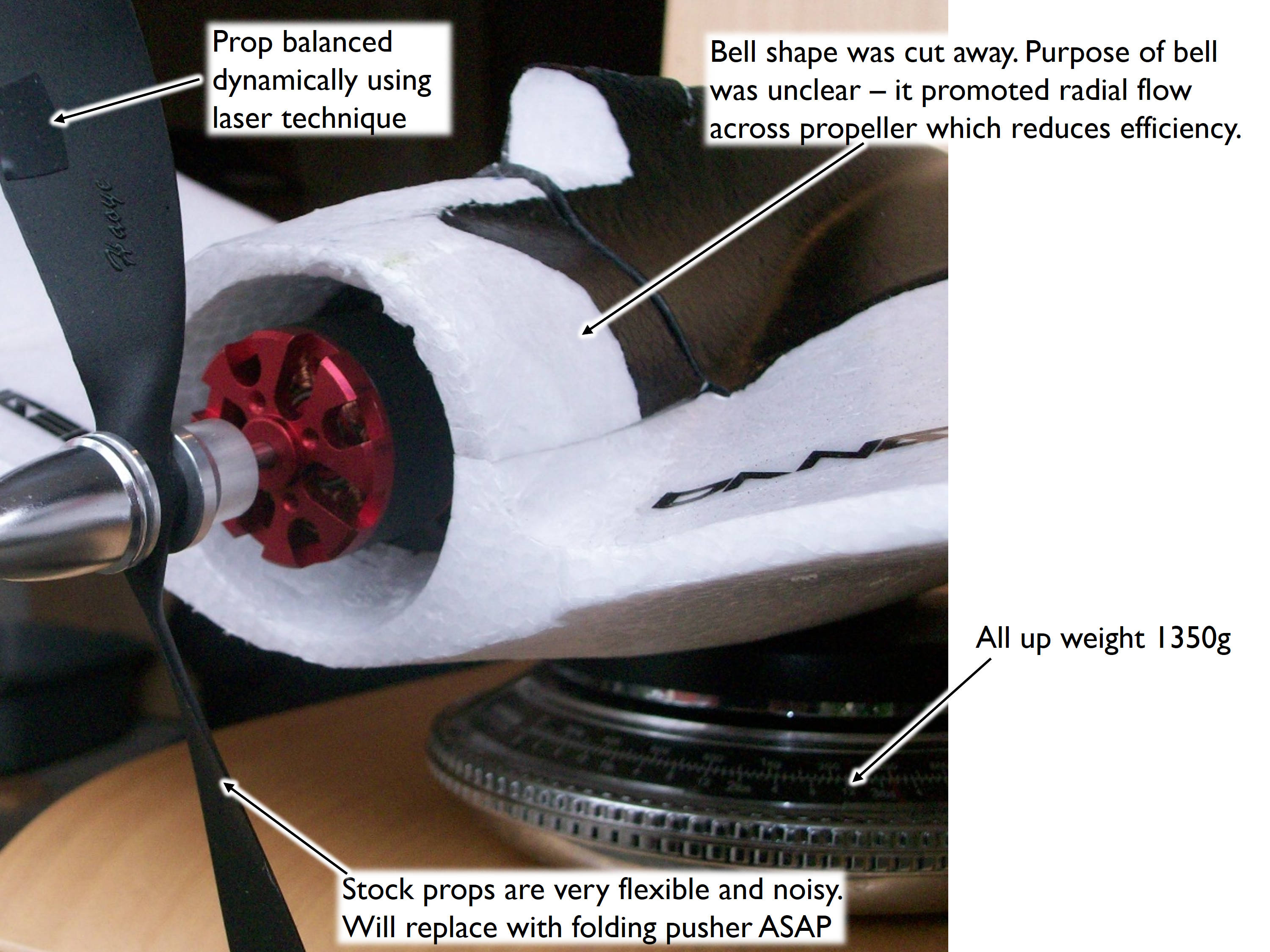 The phantom has a stupid bell shaped moulding around the motor. I cut the bell shape away. The purpose of the bell is unclear to me – the aerodynamic effect of its shape is to promoted radial flow across propeller, but that reduces efficiency. Plus, it blocked the root portion of the blades.

I balanced the motor using the trim balancing technique, using a laser plus a portion of DVD taped to the tip of the rudder to measure vibration amplitude. I have not seen any videos of trim balancing being used for RC models, it seems to be reserved for gas turbines despite being rather simple. Perhaps a video tutorial is in order.

I found the stock propellers to be impossible to balance. I thought I was being an idiot, but on closer inspection I found that the plane of rotation of the blades is not orthogonal to the axis of the hub, causing dynamic imbalance. In other words, the blades can be statically balanced to perfection and the prop CG can be bang in the middle of the hub, but the blades will teeter when spun and cause vibration. I’m not just being picky, the dynamic imbalance in my blades is very powerful!

At the moment when I come in to land I have to stop the prop on approach, and hope for it to stop in the horizontal position to avoid hitting the ground, otherwise I have to tweak the throttle until it does. The sooner I switch to a folding prop the better. I will also be switching to a 10” prop in hope of reducing noise, because at the moment this model is far too noisy for it’s power.

I worked out the cost of the drone (just aircraft, no ground equipment) as described in the above build log to be £540

The breakdown below includes some of the hardware, but also other tools and consumables. The full breakdown of absolutely everything is available upon request if you really want it.

Thanks for reading, and if anyone in Bristol wants to fly then let me know!