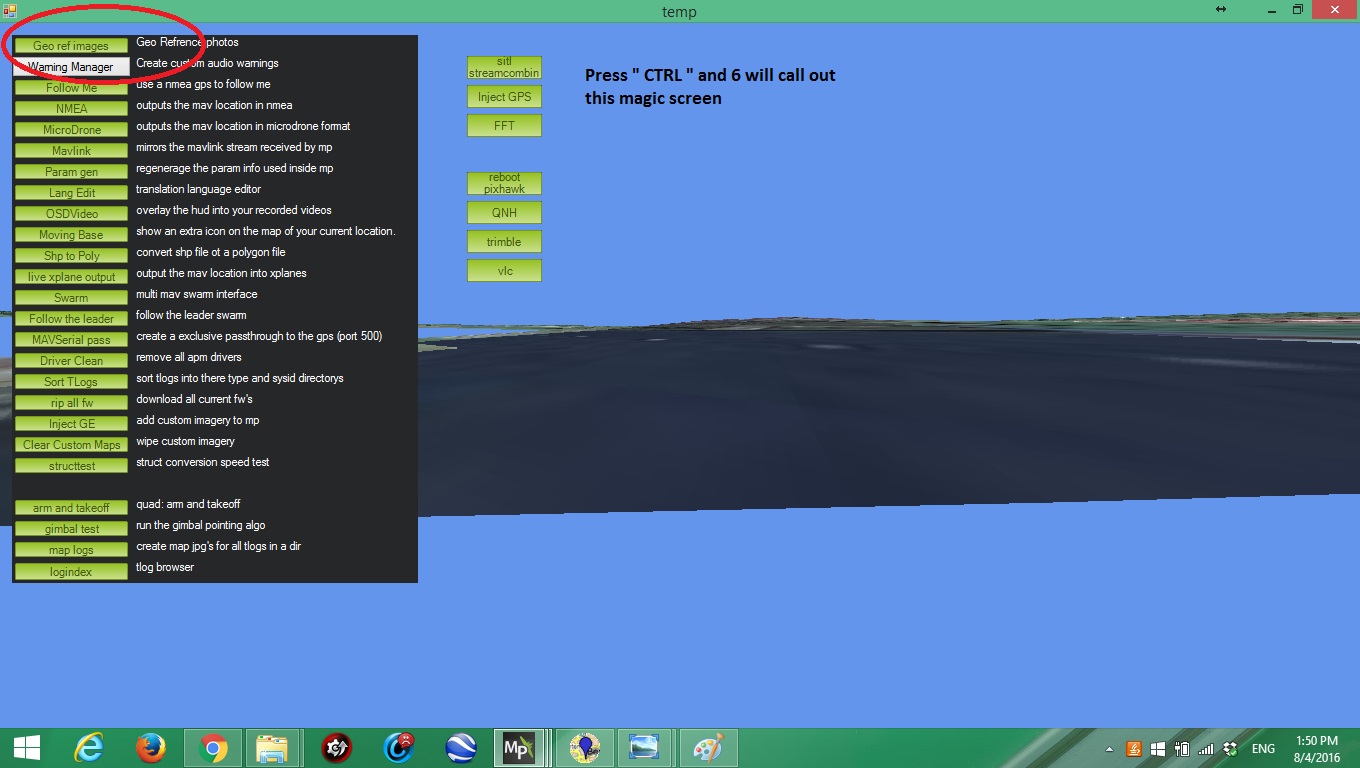 I have been using Canon S100 GPS for most of my aerial mapping work. It has been good to me as I do not require very high accuracy of the GPS location. My experience tell me that even with the small on board GPS receiver in the camera, my accuracy is always within 3 to 8 meter. Recently there are some request where very high resolution imagery is required and I start looking at better camera. For my Skywalker and FX 61 base UAV, I select Sony RX III or IV.

Since Sony III / IV does not has build in GPS, I had to use the Geo Tag feature in Mission Planner. I'm not going to re write the general work flow as it has been well documented here. I just want to share some issue that I encounter and how I solve it.

As stated in the manual, we can use CAM message from dataflash log and also time offset. It really doing a good job - provided you have set it up right. Very often user may encounter problem which prevent him/her to successfully Geo Tag  images and it is NOT fun to re fly the mission again after a long day in the field

For CAM message geo tag ,  " The most common problem in this processing mode is having a discrepancy between the number of CAM messages in log and the number of pictures in the folder. If the tool finds that they are different, it will output an error message and abort." as stated in the manual. Simply said, if the tools find more CAM message than the available images in the folder, it won't continue and you may end up forced to fly the mission again.

To prevent the discrepancy, it is important NOT to set the camera trigger interval too fast. I think to be in the safe side, the minimum time trigger between images is 2.5 seconds. This will give the camera plenty of time to write data to memory card and get ready for the next shot. Some how if it fail, I use the following method to " rescue " the dataset. 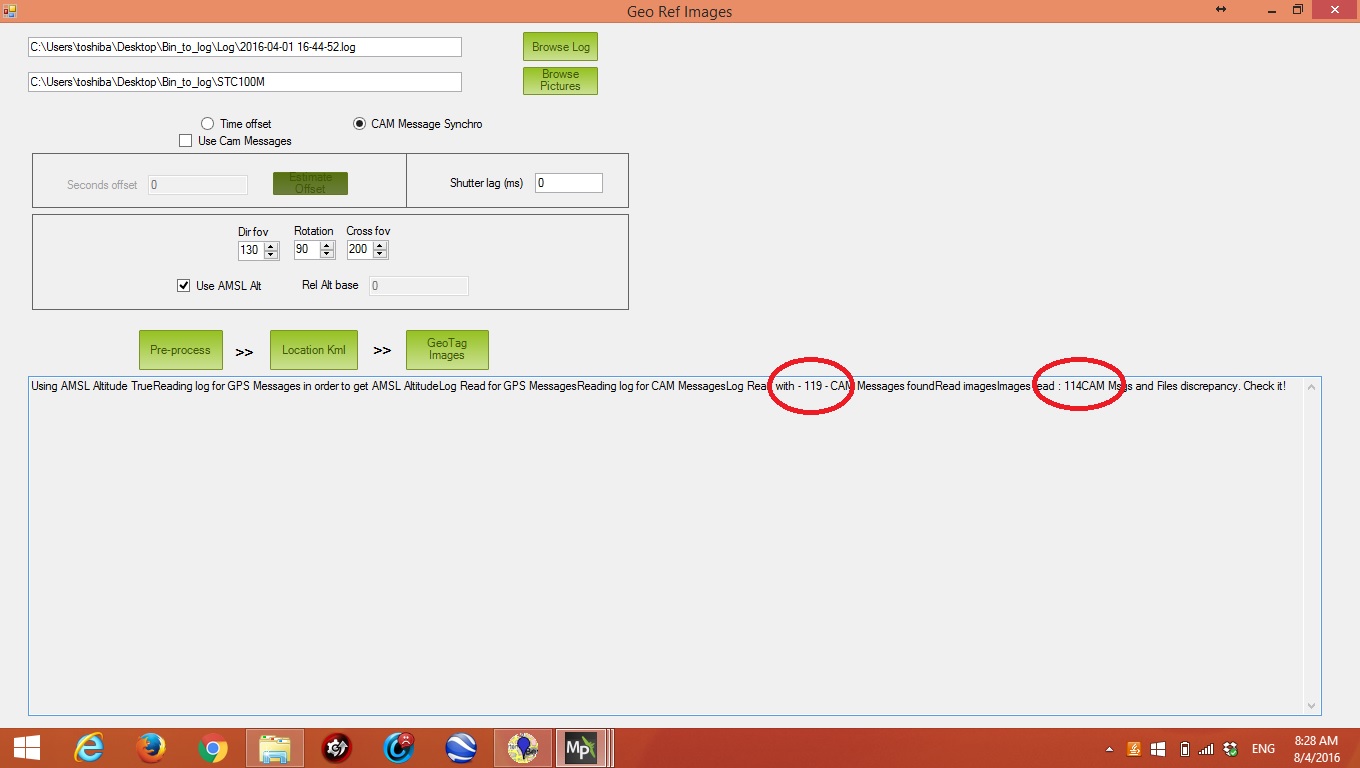 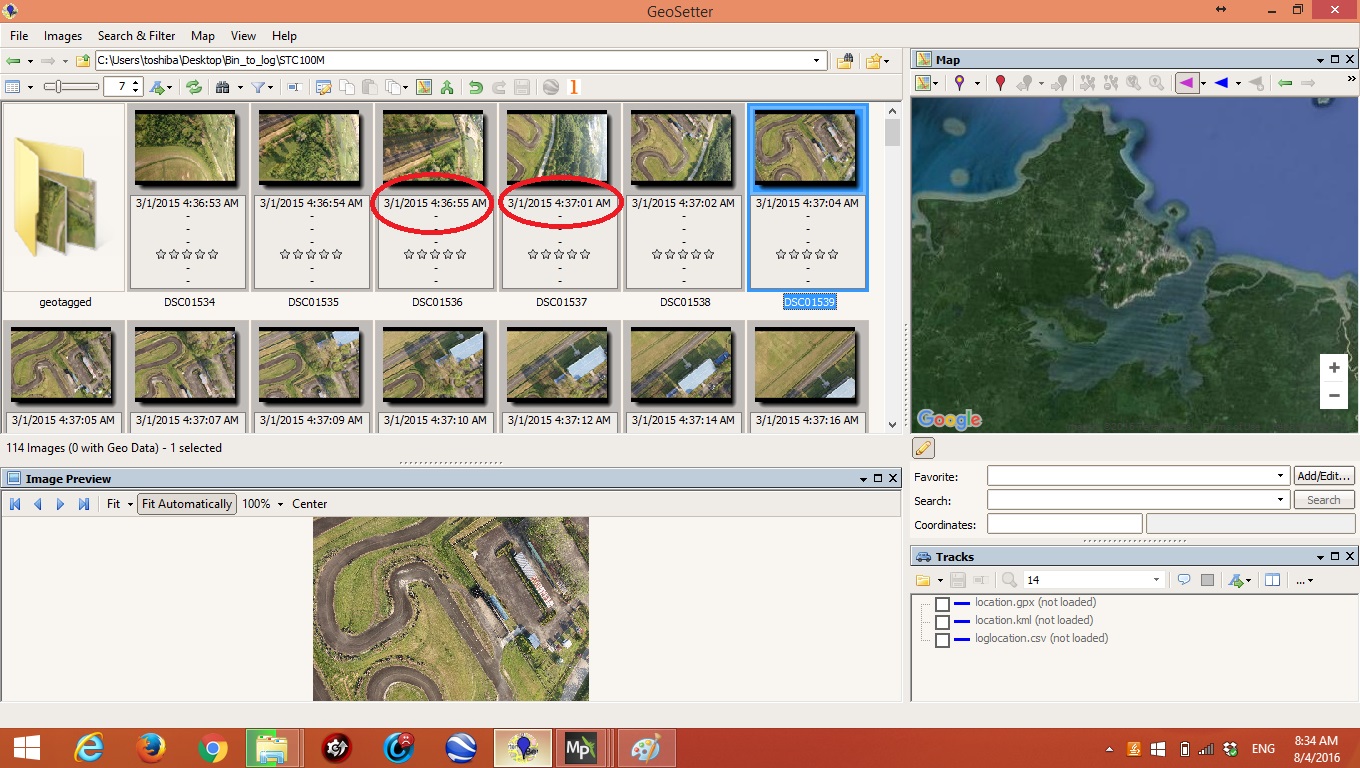 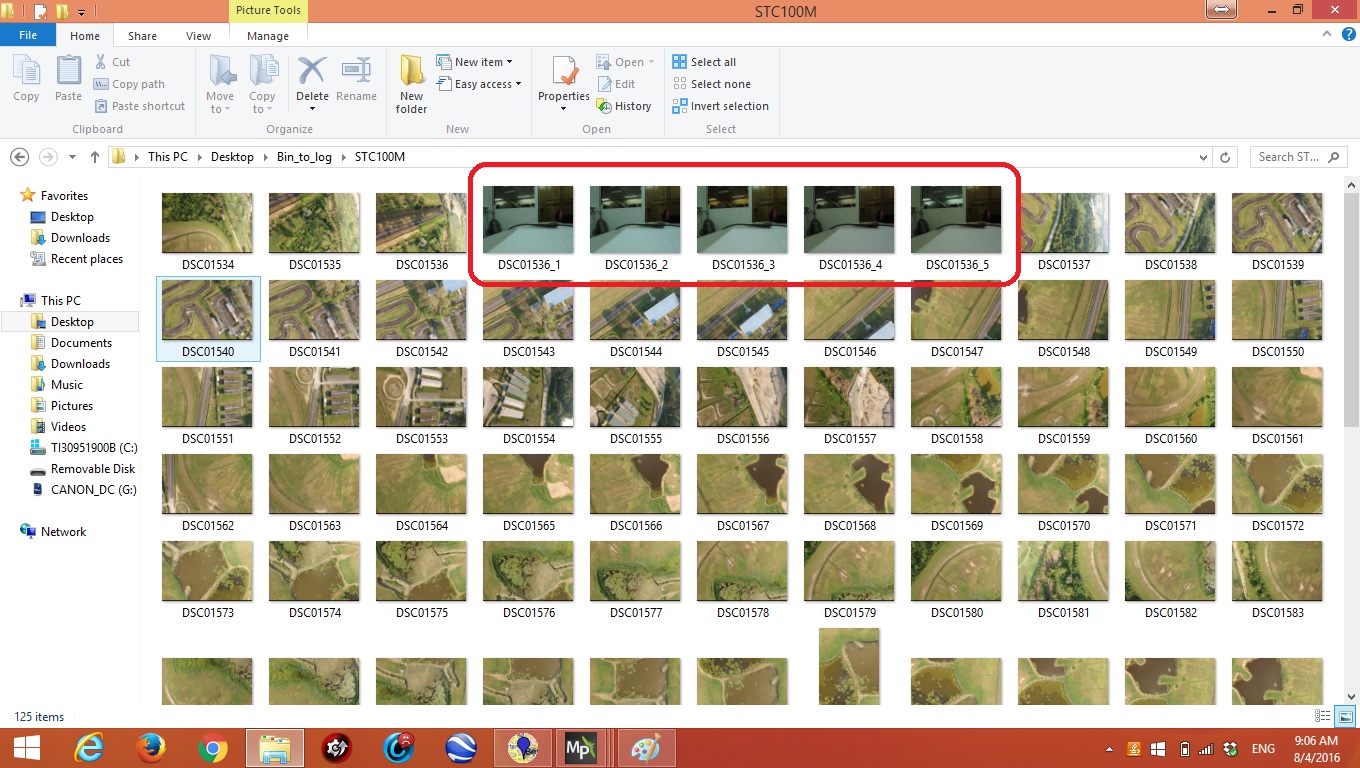 Now the folder has the exact number of images and the tools is happy to pre process it and subsequently geo tag the images. I check the result in Geosetter and found that location is accurate. Of course the few " add on " images, even being geo tagged but won't help in orthomosaic / DEM processing for obvious reason. But at least we have most of the images geo tag and even need to re fly the mission, we only need to cover those missing area rather than the whole area. I think CAM message is the best and most accurate way to geo tag images. If you are using Seagull Map2 or similar trigger device, just make sure to check " Photo every ( est ) " is more than 2 seconds when you build your mission and you should good to go.

I consider Time offset is a back up method if the CAM message fail. For time offset, the common issue is the " estimated offset " suggested by the tools is not accurate and user need to play around with the figure. the end result may not accurate either because we just " guessing ". I do have some confusion regarding the time offset idea. My initial understanding is the auto pilot will record the time stamp once it get first GPS lock ( may be 6 satellite and above ? ) then the tools will find the time of first image. The difference is time offset. It seems that the " estimate offset " in the tools also work similarly. But if you input the offset amount suggested, the GPS location is way out. 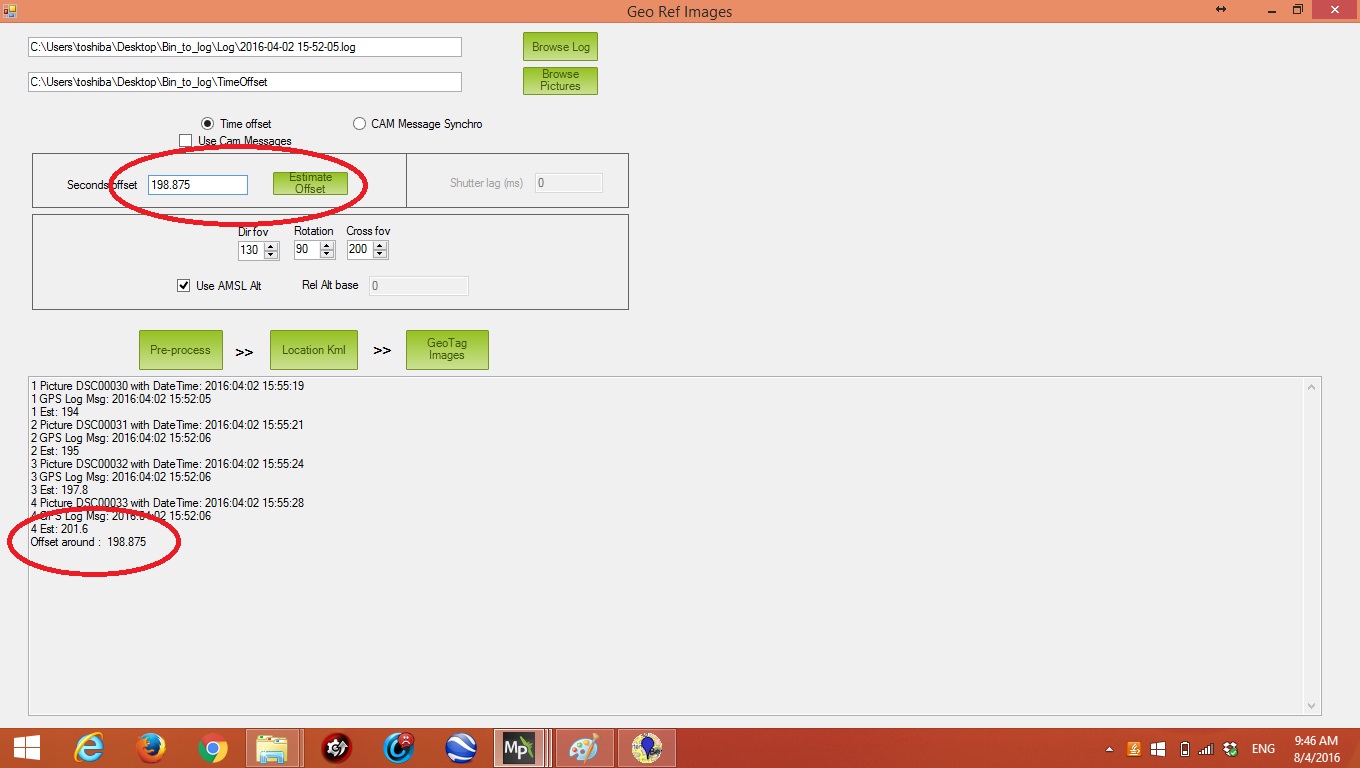 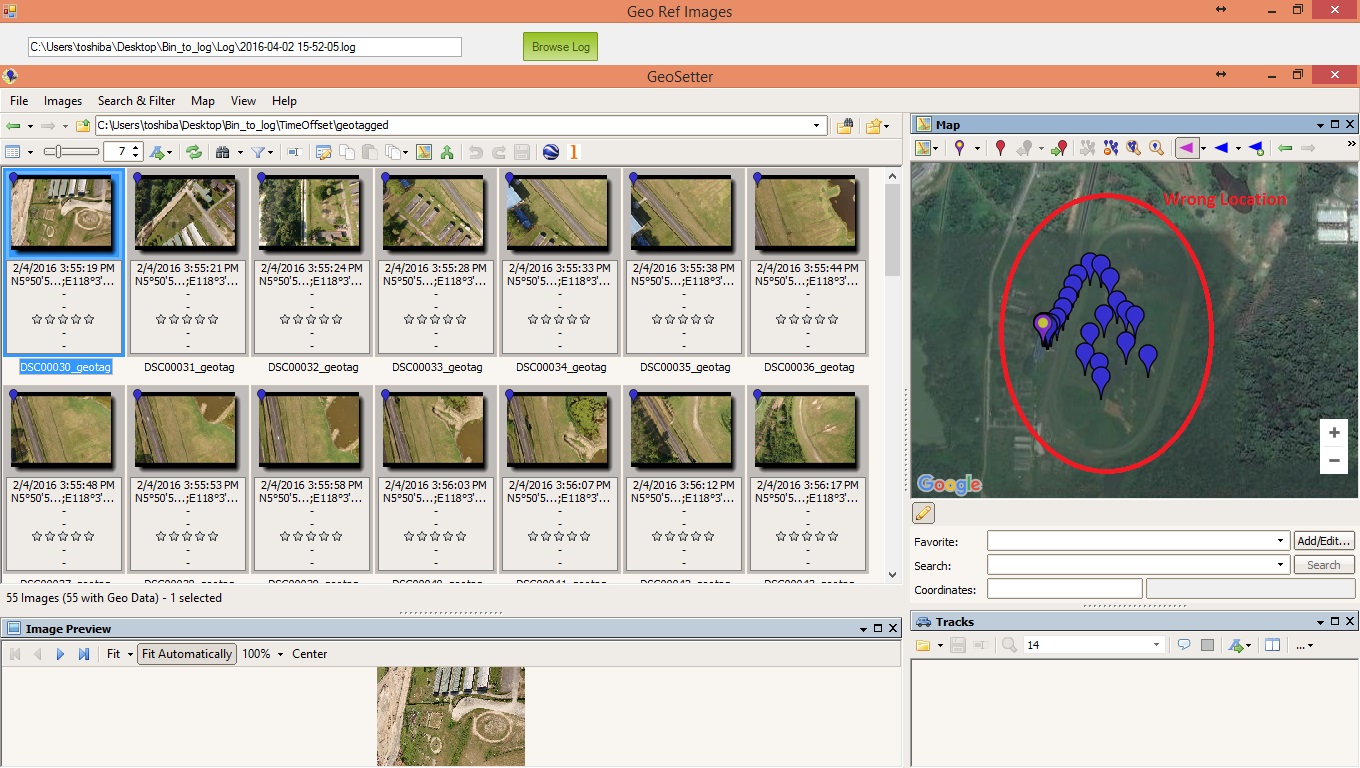 The best way I found out is just set camera time to your local time. You can simply Google your local time, in my case, I check here. Although most camera only allow to set up to minutes, you can set may be one or two minutes ahead of the time shown in the web site and wait to 59 seconds then press the " SET " key once it turn 00. Do it as precise as possible. You can take a picture of the computer screen with the time shown and check the images in Geosetter, which can display the image exif file up to seconds 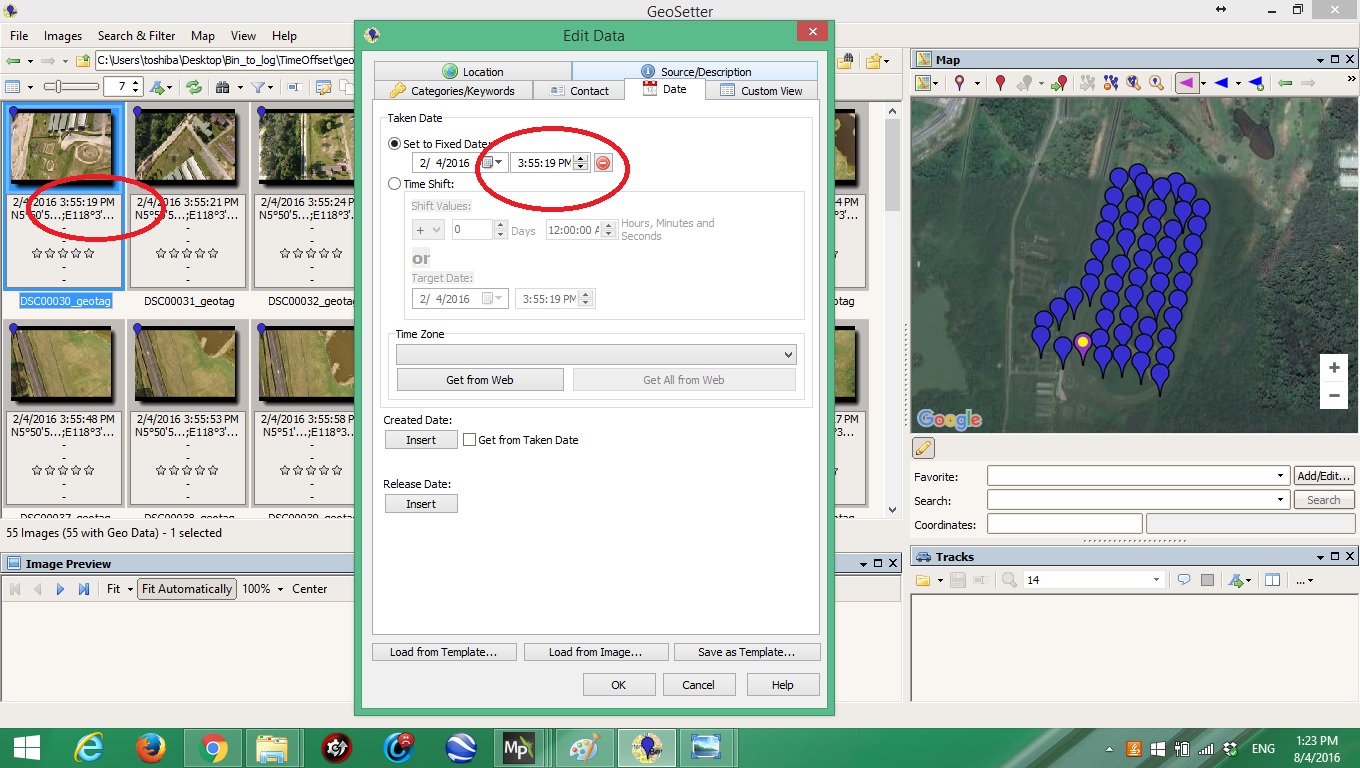 Once the time had setted, if you use Time Offset for geo tag your images, you simply input 0 second offset, then go for pre process and geo tag images. 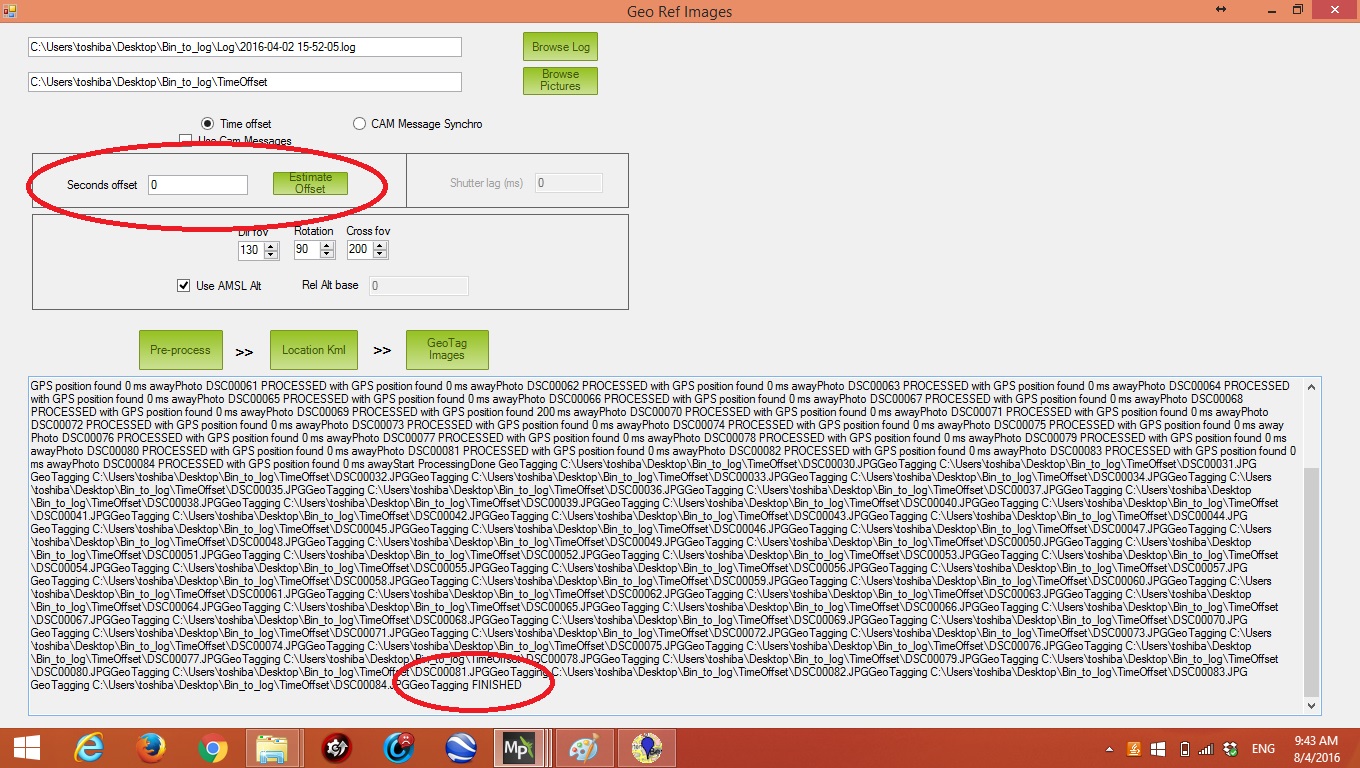 There you have it, a nicely geo tag data set waiting for processing. Some decent eyes may found that my Skywalker not tracking well at the first way point. This is because it make a sharp turn of more than 150 degree go toward way point 2 and for some reason the auto pilot is quite lazy to trace the grid line at that point. Normally I'll set 50 to 70 meter over shoot, depends on wind direction to avoid this issue. I also try not to let the plane turn more than 90 degree on it's flight path toward second way point.

I hope the above info will complement the Arduplane manual and make geo tag images easy and fun.