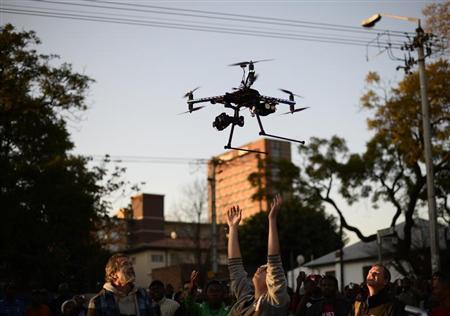 A dozen police officers apprehended a man who flew a radio-controlled mini helicopter over the Pretoria hospital, where former president Nelson Mandela was being treated on Friday.

The multi-copter had a rotating camera and was in the sky for a few minutes. A multi-copter looks like a spider. It has several arms attached to a central control unit. A rotor is mounted on the end of each arm.

As soon as the gadget landed in the hands of one of the controllers, police rushed to the area. Hundreds of people, including journalists, mobbed the officers as they escorted the man and his helicopter into the hospital.

The helicopter apparently belonged to FC Hamman Films, a private film company. It was not clear what police did with the man or the helicopter.

According to Reuters Hamman, a South African freelance film-maker, was escorted away by police along with the helicopter camera he was flying with his 21-year-old son Timothy outside the hospital.

"As far as I know, I didn't do anything wrong," Hamman told Reuters by phone from the office in the hospital compound where he was taken by police. He said he was waiting to be interviewed by senior officers and for them to view the footage filmed.

"We were careful not to fly over the hospital," Hamman said.

He said he had intended to offer to media organisations the aerial shots of intense activity around the hospital, where crowds of jostling journalists have mingled with well-wishers paying tribute to South Africa's former black president.

Hamman said he had already used the home-built flying camera in other film projects and had also assisted police with surveillance work in operations against suspected drug-dealers in the Johannesburg suburb of Eldorado.

Police had not so far pressed any charges, he said.

"You can't fly one of those things without a permit," one police officer said at the hospital after Hamman was escorted away. Pretoria police declined to comment further.