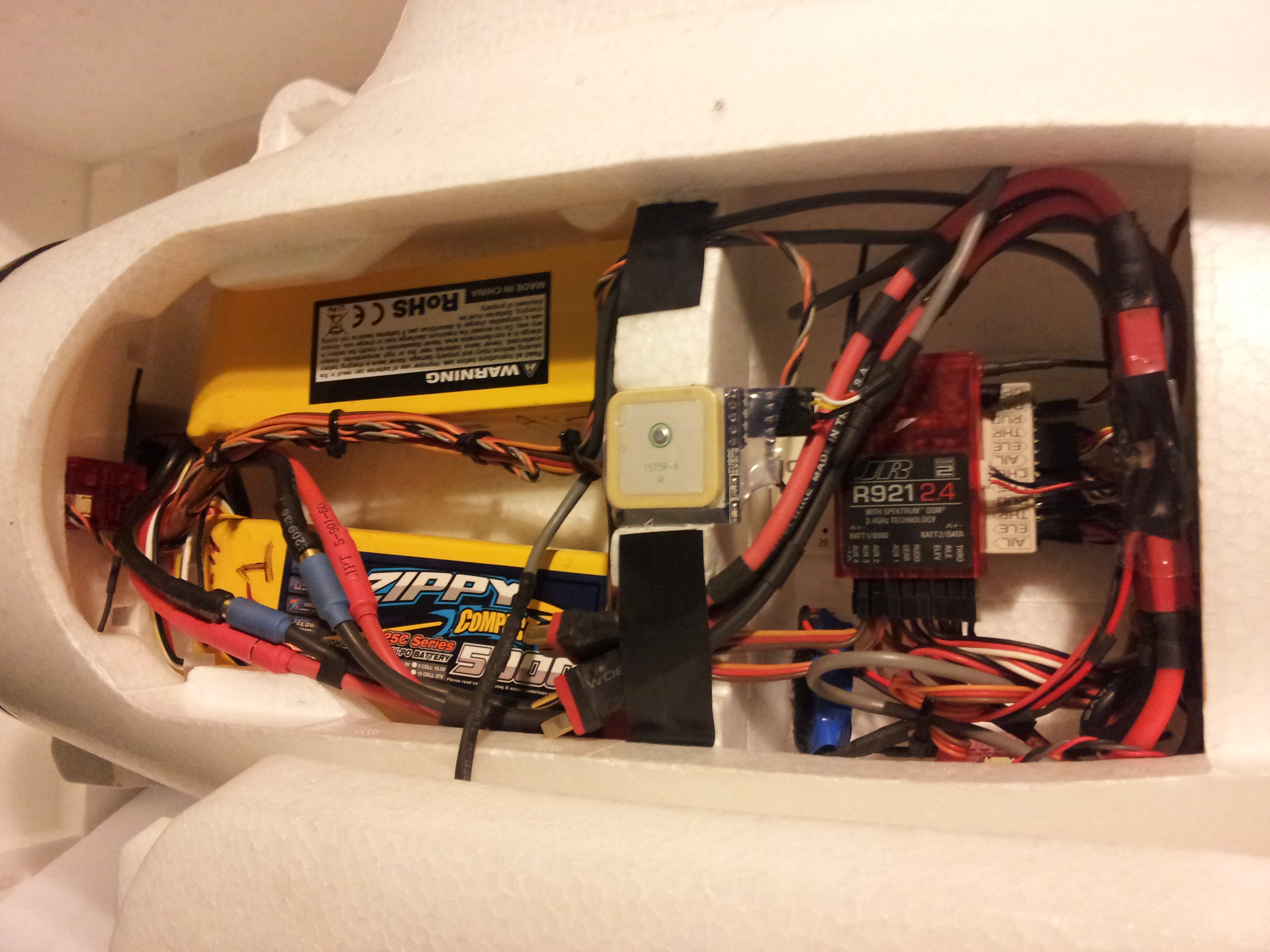 Good Monday Morning Everyone!!  I am going to blog about the CG of the RVJET.  There are so many pros that we sometimes forget to talk about a couple of cons with the RVJET.

When the design team were building and designing the RVJET they were not completely sure of all the specs of items like the motor, and ESC. They could not think of all the possible configurations that the RVJET would be set up with at the user level.  The other thing to think about is that this was designed for FPV users and not necessarily the Autonomous Vehicle Crowd.  It is ok though,there are lots of solutions in this amazing air frame.

In the first picture I went with the first natural configuration that the system was designed for.  I have the MFD AP and Spektrum 2.4 system in the plane.  (I have been waiting over thirty days for my package from HK to get here with my LRS.  This was simply setup for testing and first flight.)  I placed the two 5000 mah batteries in the front compartment and my camera in the KX191 in the Gimbal with two servos for the pan and tilt.  This first setup gave me the CG about an 1 inch/25mm in front of the fin.  This was according to the manual that this would be ok.  This is a typo in the manual.  The picture shows the right CG but the print is wrong.  The CG should always be where the fin meets the wing at the bottom.  There are about +/-5-10mm play there I have been informed but should really be at the winglet.  The first flight was a disaster because the roof hatch came off and the GPS/ Bluetooth and half the hatch cover were lost in the air.  They were probably cutoff by the blades.   I almost got it back around and it nosed in.  This was purely my fault.  But the wing is incredibly resilient.  The dome protected the camera and the only foam damaged was a small kink in the wing (no problem) and the top portion of the fuselage and the hatch cover had to be replaced.  And I had to replace the pan plate in the tilt/pan configuration because it broke a small pin.

In this second picture I have a very similar configuration but since I was able to rework everything I took the opportunity to do so.  I had hoped that my LRS would have been here but alas it is still not here. 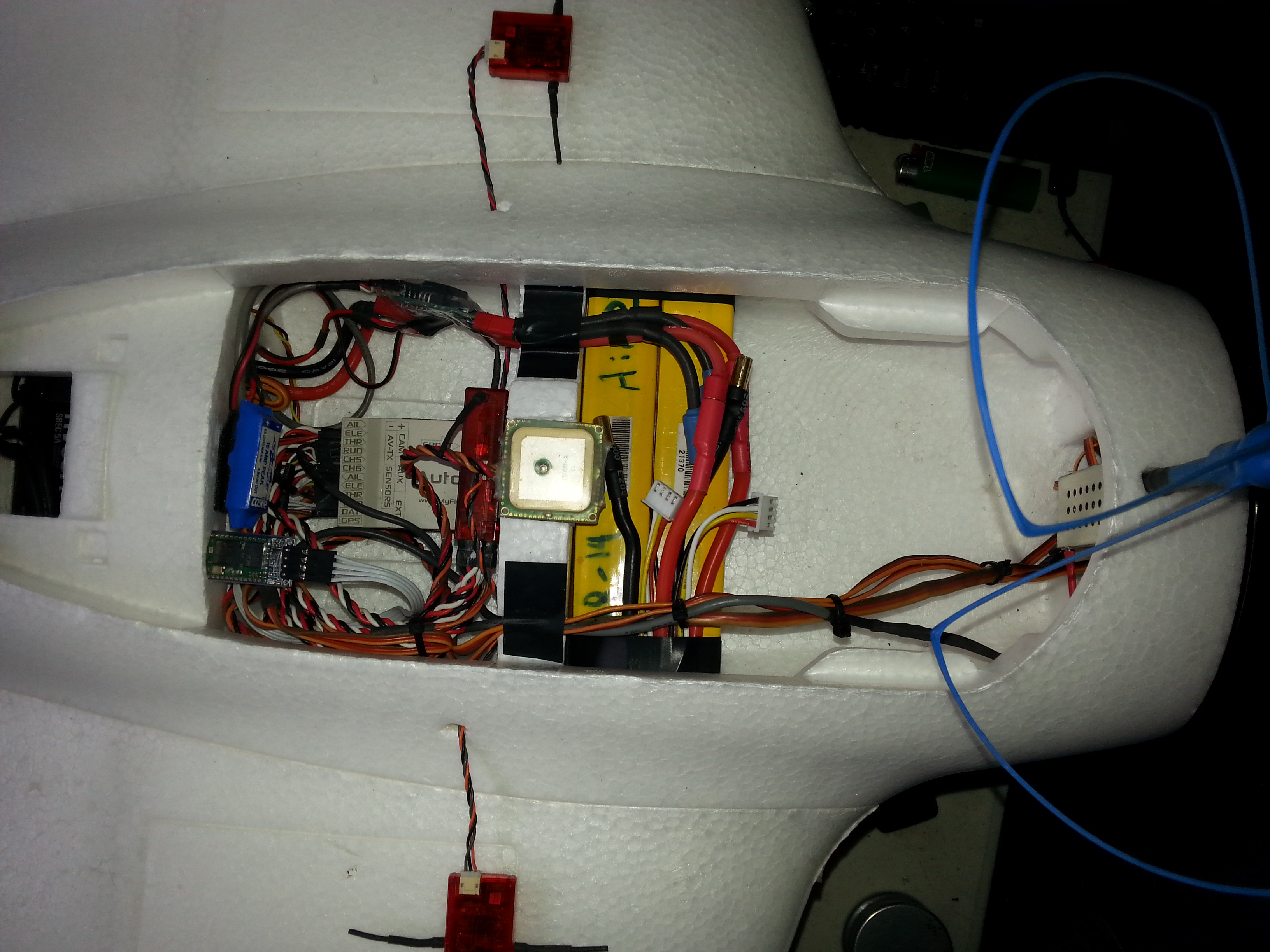 I should also note that this is my personal RVJET not my sponsored ships.  The equipment will be different and that will be addressed in the build logs of the conservation UAV.  I will answer any question on components but this blog is about CG not the equipment specs.  I will be doing a write up in the future about the MFD AP.  It has an amazing launch feature that everyone should have.

Alright back to the second configuration here.  One of the things that you may notice in the first picture is that it is not an ideal EMI environment for any of the equipment.  My battery wires are too long and all kinds of mess with that configuration.  Another blog I will address this more thoroughly and what I have done to prevent and shield EMI and RFI.  I have carved the front hatch in this setup so that the batteries will set across the bay and in front of the front spar.  The third picture will show that cutout and how it is set.  This moved the battery weight back while keeping pretty much everything but the AV radio in the same place.  I moved the 2.4 Rx to provide clear access to the indicator lights in the MFD AP. 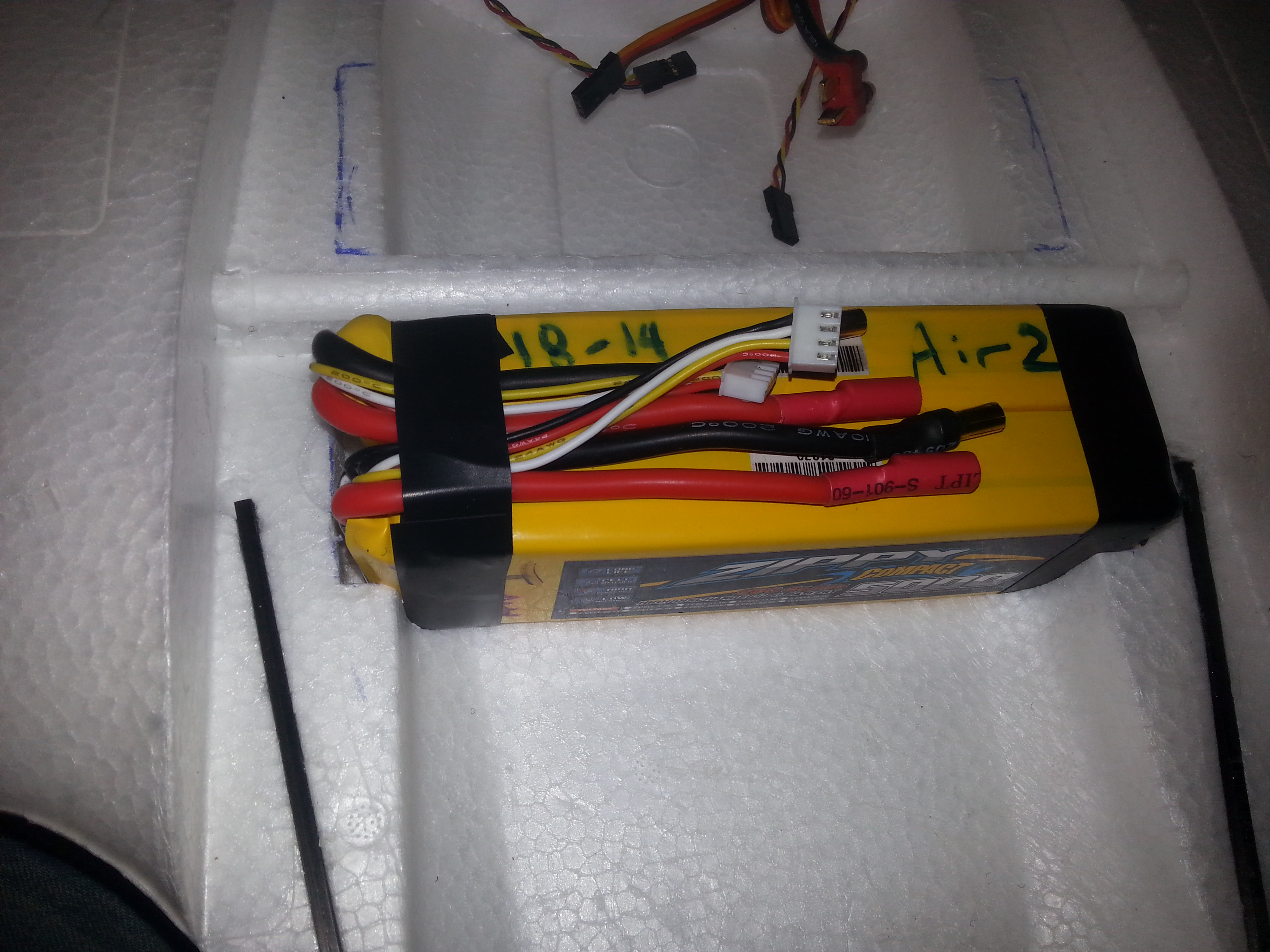 In this third picture I have set the batteries in front of the spar.  It seems that the best ideas come after the fact but I glued the top cover over this.  I can charge the batteries on board and 10000mah should give me ample time for testing and enjoying the RVJET in this layout.  I also thought about cutting the batteries in the rear compartment.  One can see my marks that I made in case.  The designers have informed me that there is plenty of foam that can be cut out of the bays.  The RVJET is way overbuilt as far as the fuselage is concerned and it will not compromise the integrity of the frame to make strategic cuts in the foam.  It also has plenty of foam in the wings and sections to tunnel wires to a LRS or AV if one chooses.  We will probably be doing this in the competition plane.  There will be a lot more equipment up front so placing the batteries in the back will still be able to be offset in the front for CG. 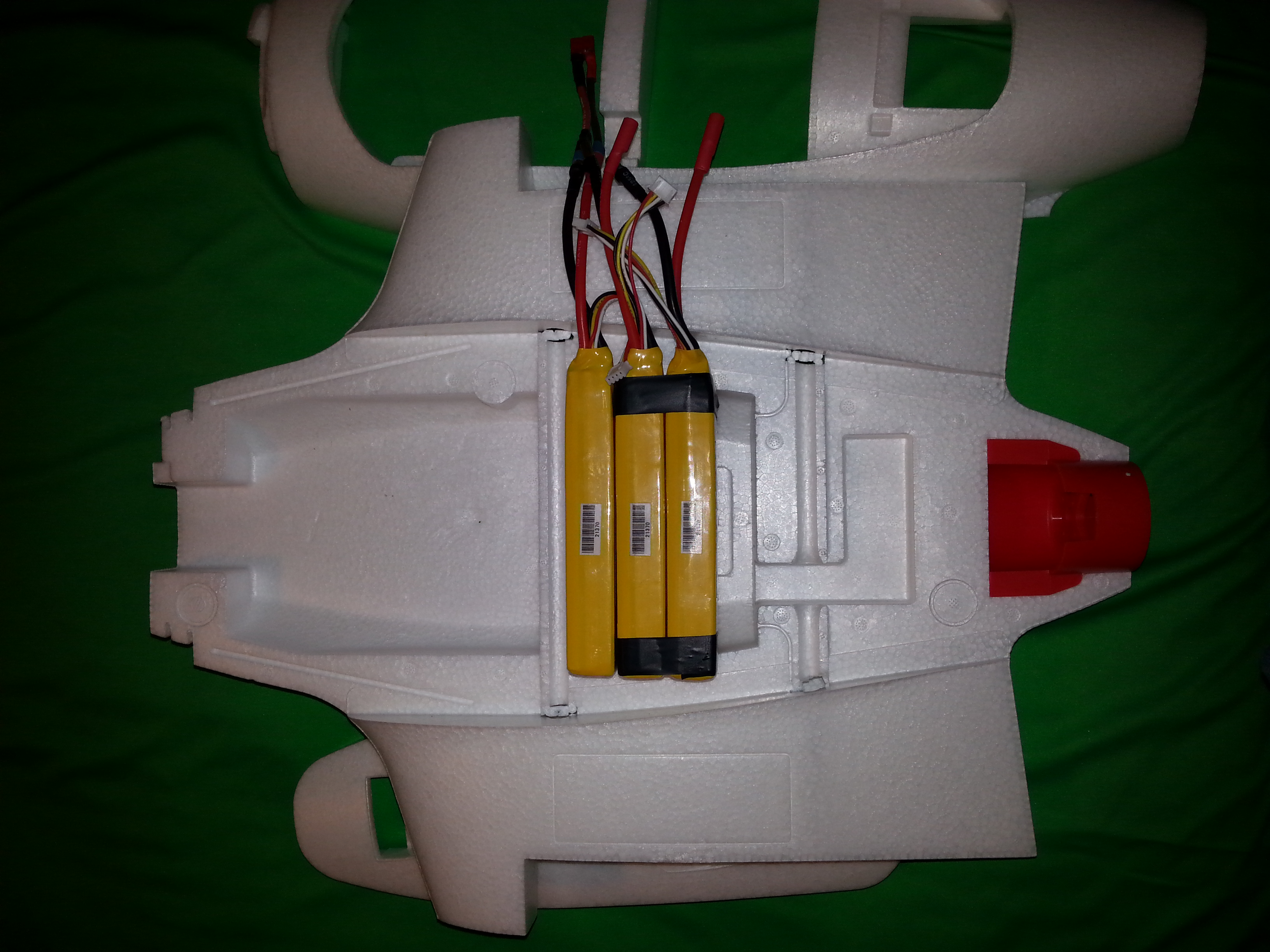 In these two pictures I am showing a couple more layouts.  We we will probably make a cutout for three batteries in the rear compartment and two batteries in the front.  We do not plan on using 25000 mah in batteries it will just give us some flexibility in managing payloads by placing two batteries in back, two in front, or one in front and three in back, or two in front and back at the same time. or just three in back.  It will be helpful when we start switching out different camera and sensor payloads.

The editing on this is a problem so please scroll down to the last picture and there will be the hatch explanation and the conclusion to the blog. 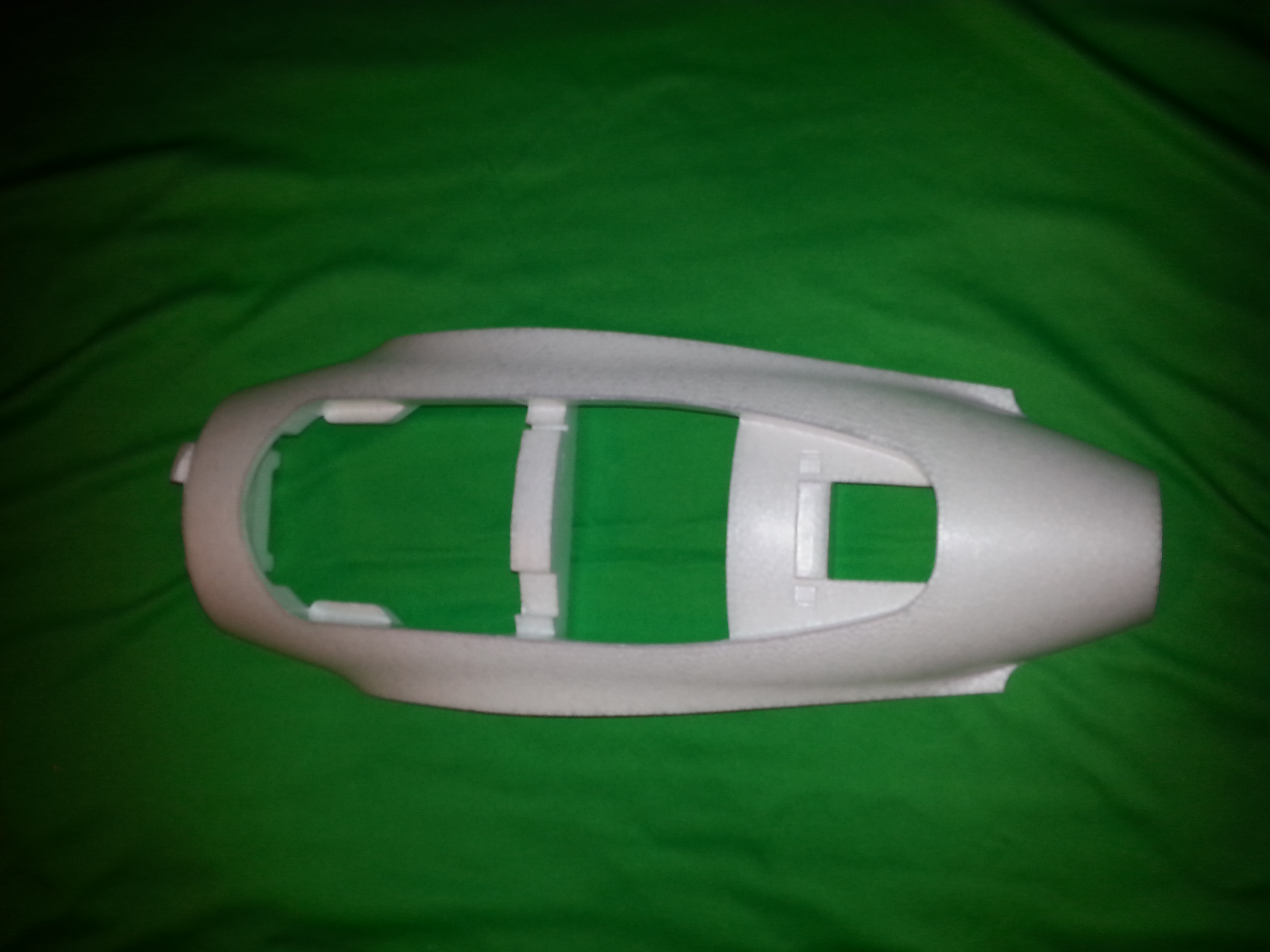 This sixth picture is of the top fuselage.  It is supposed to be glued in place and we did on this build and it locks in the batteries.  I could have carved enough to twist the batteries out but I did not.  On the competition build we will be modifying this piece.  We will cut the fuselage top about a half inch aft of the hatch opening.  This will allow us to glue it to the motor mount and lock it in place all the way around it.  The rest of the fuselage top will be bolted in place with two bolts in front of the front batteries and two just aft of the second spar before the ESC.  This will give four bolts and the front is fastened with the camera pod.  This should make for a secure fuselage that the batteries can be removed and the hatch cover can still be accessed in between as well just like normal. As always thank you for reading our blog and I hope that you have fun flying.  I hope this tutorial is handy so that it will help you balance CG while providing plenty of batteries for endurance.  We will be covering this subject again as we actually build the double fuselage competition plane.  Have a wonderful week.