For a project my group is currently undertaking with media lab Asia, we had to fabricate a UAV that could be used as a data mule in case of disaster(Delay tolerant networks). 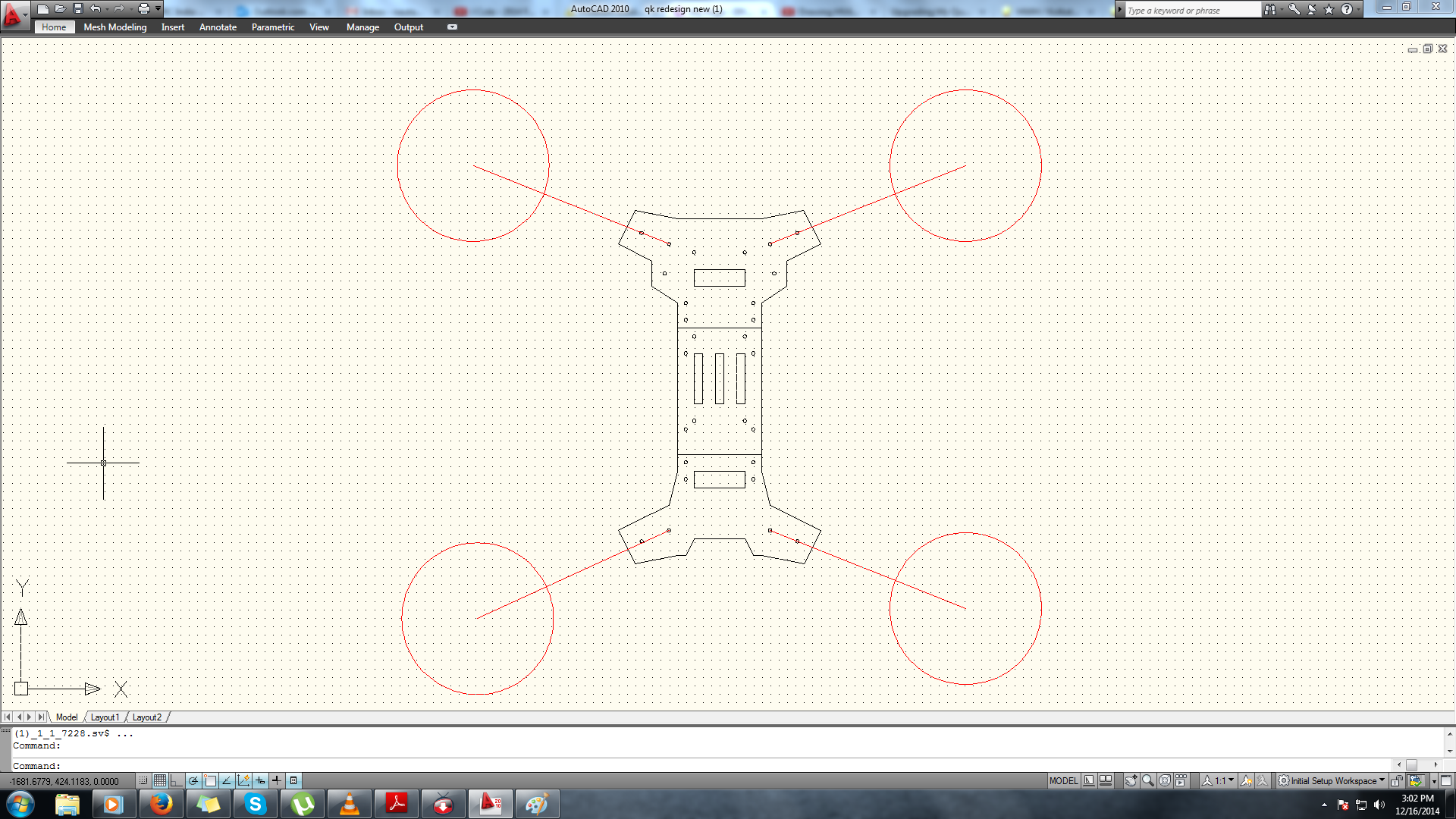 Decided to go for an H frame and designed the following frame on Autocad. motor to motor distance is 525 vertical (as in image) and 575 horizontal.

I then decided to have the plates CNC cut, but the vendor only sold sheets of limited sizes, thus i had to get back to the drawing board and cut up the frame into 3 pieces for both top and bottom. 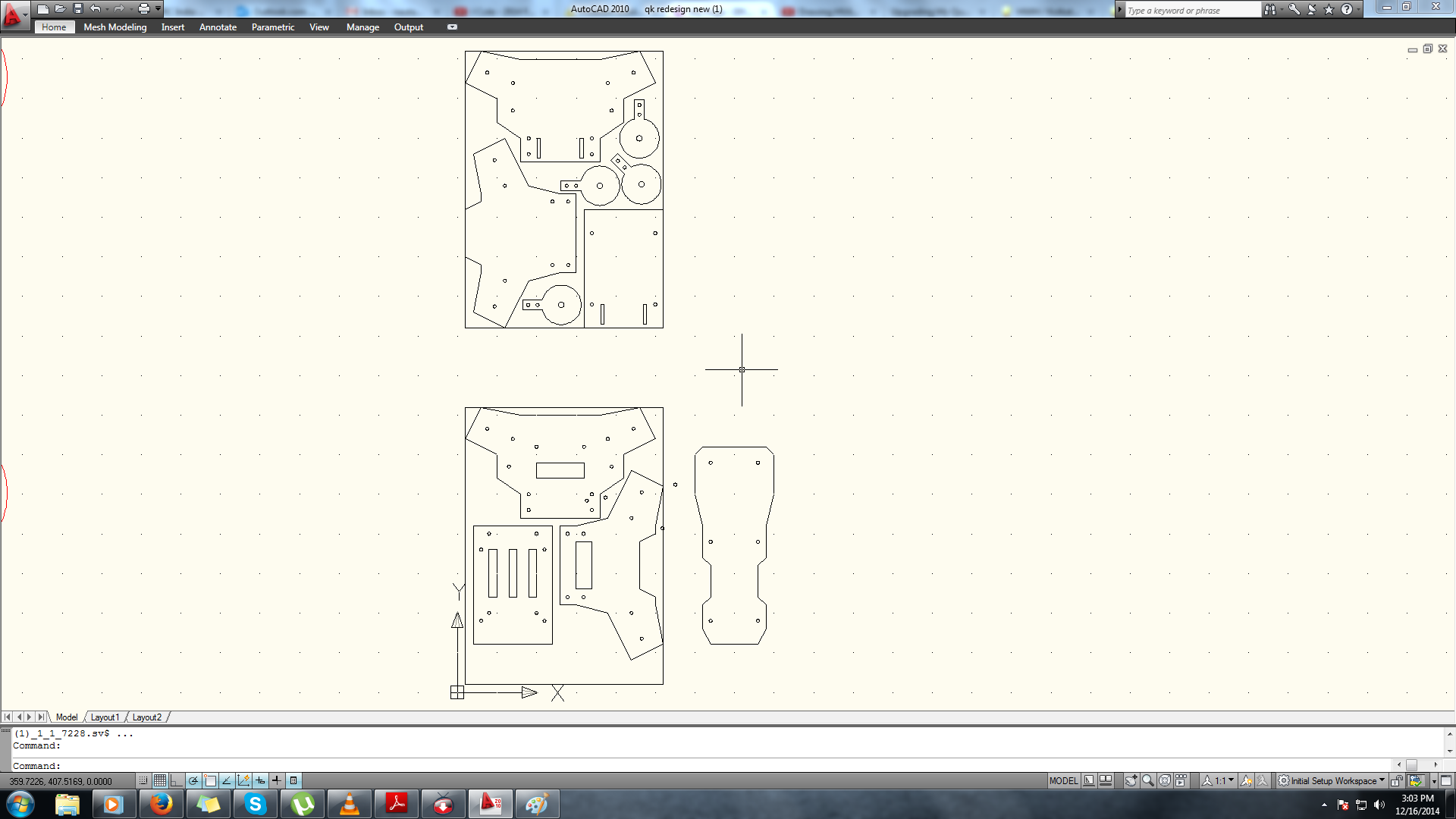 felt like adding another top plate (bottom right in picture) which would rest on vibration dampening and would house the APM and other components for the project (Raspberry PI etc).

Told the shop to use G10 2mm thick (Green Indian Glass Fiber) as it was about the cheapest option, At this point i realize that was pretty much the biggest mistake i made in the build, the weight of G10 2mm seemed to be too high. 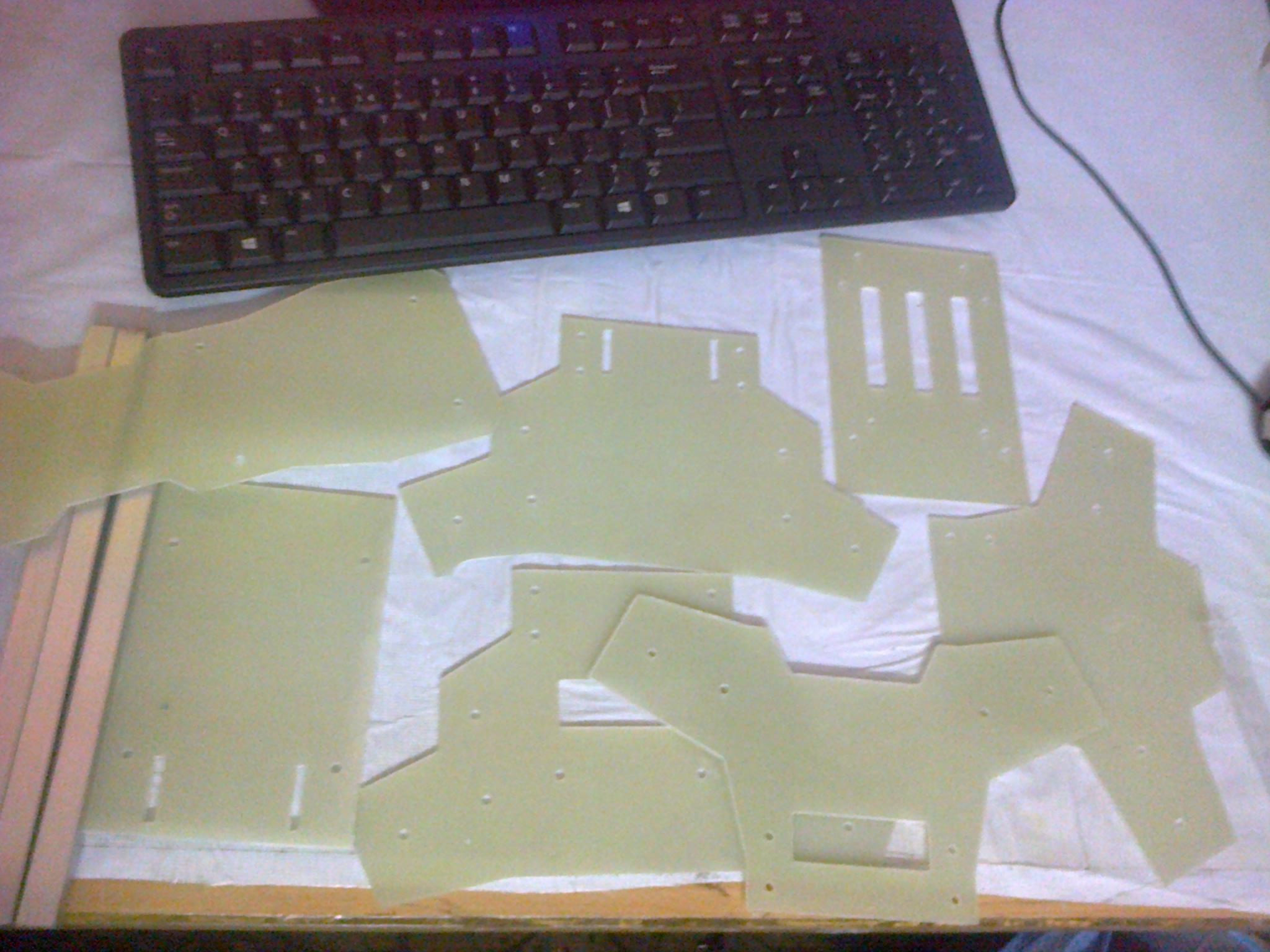 had to modify the shape a little to save an odd 150 grams, also let go of the 3rd plate. still looks nice enough, but was worried about the shape, the law of symmetry was my guideline in most other past builds, here it does not apply too easily. 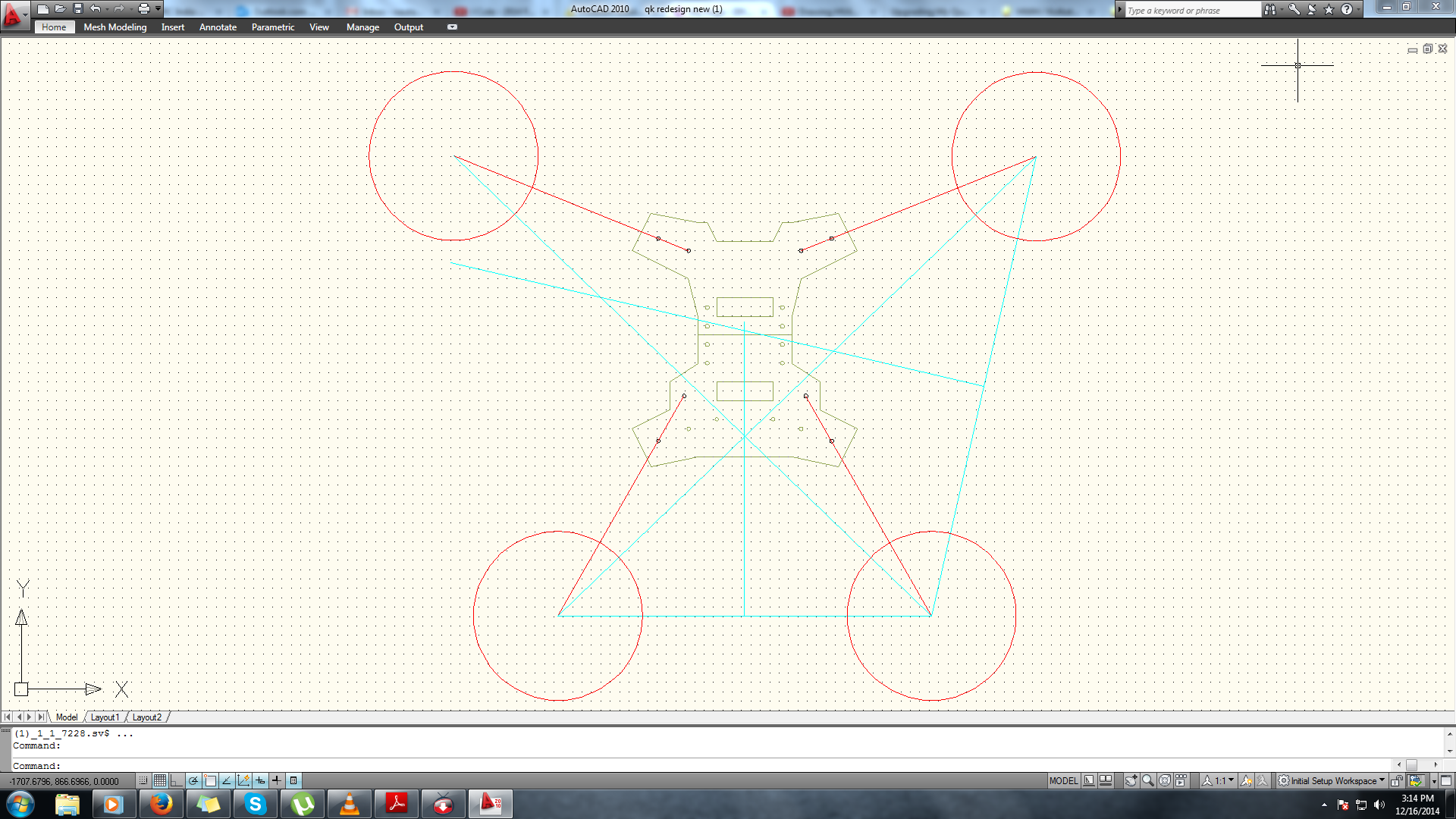 blue lines indicate the COG and COT (I was confused about the two, still am). 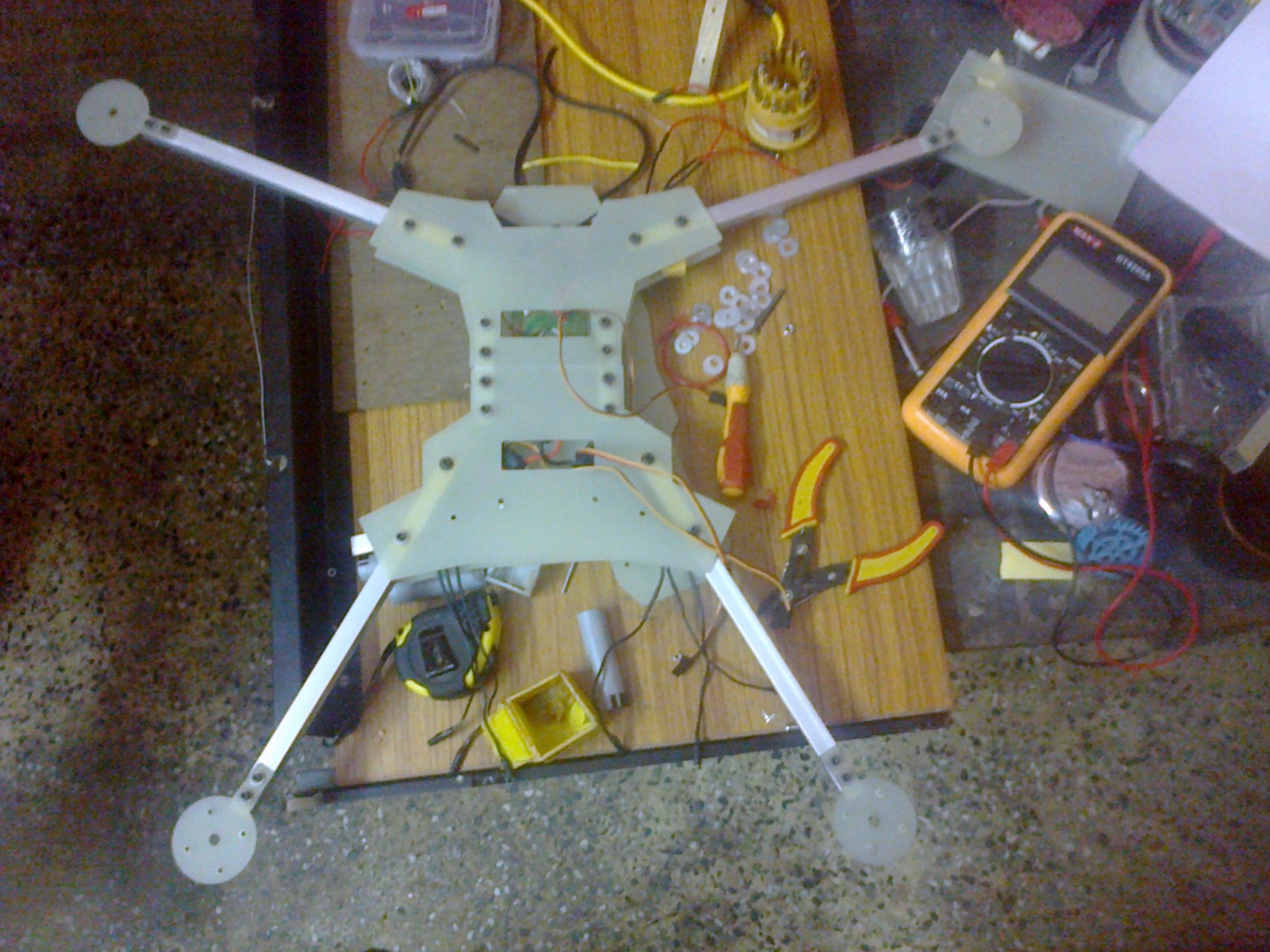 Decided to extend the esc wires and also modify the power distribution board so that it fits inbetween the plates, have since put on the flight controller board, AUW was around 1400g with a 3500 mah battery, quad seemed to have a tendency to drift forward more than backwards.

Had issues with Auto navigation as the quad tended to start acting erratically when in auto flight mode, sometimes not even moving towards the waypoints, and move around in circles when in Loiter mode. have corrected that to some degree by adjusting the PID settings, although still not optimal, will upload links to video and the completed quad as soon as i find a image hosting site to use. (have reached my maximum here :-P )

Credits to my partner Junaid Petkar, he did most of the work but he does not mind giving away bragging rights to me. :-)