I've been experimenting with using an Arduino-powered vision system to detect and locate point light sources in an environment. The hardware setup is an Arduino Duemilanove, a Centeye Stonyman image sensor chip, and a printed pinhole. The Arduino acquires a 16x16 window of pixels centered underneath the pinhole, which covers a good part of the hemisphere field of view in front of the sensor. (This setup is part of a new ArduEye system that will be released soon...)

A 16x16 resolution may not seem like much when spread out over a wide field of view. So to boost accuracy we use a well-known "hyperacuity" technique to refine the pixel position estimate to a precision of about a tenth of a pixel. The picture below shows the technique: If a point of light exists at a pixel, the algorithm constructs a curve using that pixel's intensity and the left and right intensities, then interpolates using a second order Lagrange polynomial, and computes the maxima of that polynomial. This gives us "h", a subpixel refinement value that we then add to the pixel's whole-valued horizontal position. The algorithm then does something similar to refine the vertical position using the intensities above and below the pixel in question. (Those of you who have studied SIFT feature descriptors should recognize this technique.) The nice thing about this technique is that you can get the precision of a 140x140 image for "light tracking" without exceeding the Arduino's 2kB memory limit. 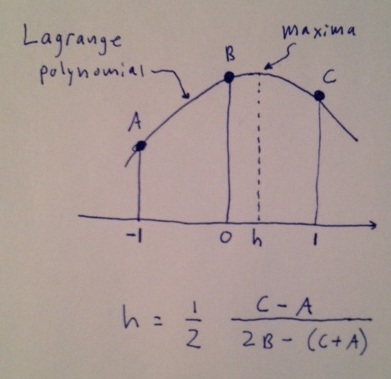 It would be interesting to hack such a sensor with a quadrotor or another robotic platform- Bright lights could serve as markers, or even targets, for navigation. Perhaps each quad rotor could have an LED attached to it, and then the quad rotors could be programmed to fly in formation or (if you are brave) pursue each other.

With additional programming, that sensor could also implement optical flow computations much like I had done in a previous post.

The main Arduino sketch file can be found here: LightTracker_v1.zip

You will still need library files to run it. I've put these, as well as support documentation and Eagle files for the PCBs, in the downloads section of a Google Code project file, located here: http://code.google.com/p/ardueye-rocket-libraries/downloads/list