This isn't a build log. And what's shown here wasn't built as a rover. It is a rover, sure, but it was built as a playground, a collection of dozens of separate experiments, trials, and ideas. I build this a few months ago, and I'm about to tear it apart and rebuild it based on the lessons I learned, but before I do that, I figured I'd share a bit.

This was a relatively low cost build, for me, but it would not be inexpensive to reconstruct. I had many of these parts already, so I'll provide some details, but it isn't really a good idea to repeat this exactly. Even I would not build it like this a second time.

The chassis is a Ruckus Monster Truck. I've been very happy with it. If you know about RC trucks, no doubt, you'll have lots to criticize with this bottom-end 1/10 scale vehicle, but it works just fine for autonomous roving on semi-broken ground and natural grass lands. If you have a lot of obsticles over 3.5-4" and you might need to upgrade to a crawler or something in 4WD.

I'm using an APM 2.5, a 3DR 5.8 FPV kit, with OSD, a Futaba R6208SB rx, a 3DR telemetry kit, a GoPro camera, and a previous generation 3DR LEA6 v1.1 GPS. Besides the 3D printed parts, I use a few #6 screws from Home Depot of various lengths, a 6-to-individual-6 pin'ed cable for the rx (because it was handy, I normally make custom cables from a kit of parts I got over at Hansen's Hobbies,) one 3 pin servo cable for power and channel 8 to the rx, and a few zip ties.

I removed the shell and some of the plates provided to hold bits in place. One nice feature I made use of here is the twist wing connectors. They are supposed to hold a plate in place for the battery, but the velco strap holes are sufficient for that so I repurposed these twisting winged items as the way to hold the 3D printed body to the chassis. While you can see screws, these screws are not fixed. They are glued onto the orange 3D body, but they act strictly for alignment for the chassis, as pins. Why use screws? They are cheap and easy to source. A smooth pin would be nicer, but I had screws.

I left a large space above the battery, allowing the battery to be inserted and removed easily without taking anything apart. The body and chassis fit together like a glove, stay rock solid while driving around, and come apart in seconds, but disconnecting the two servo cables is a bit of a pain. In the future, I might add a socket that causes the servo cables to connect/disconnect just by attacking the body. I suspect the guide pins would pay off even more then. The 3D work was created in Google Sketchup, sliced on KISSlicer, and printed using Printrun (for Mac) on a PolyPrinter in ABS. PolyPrinter is a large build area (9x9x9") rock solid industrial-grade FMD printer creative iteratively by fellow Makers in the Dallas area based on their frustrations with less-reliable and more well-known printers.

In the center of the lower plate, I experimented with integrating Tastywheat's Onmimac 3DR APM Anti-Vibration mount. It works just fine, and while it makes a nice looking stand-alone mount, I would not integrate it like this again. It is far easier to re-create the essential bits and not have to fix all the curves and intersections. You'll notice various arches and buttresses underneath. All of these printed perfectly, without any support, on my PolyPrinter, and they really add rigidity to the structure. While not shown, I did also add thicker triangular bands on the underside of the large surfaces, to add rigidity and reduce weight. This structure was printed in one go, with no issues, and it fits like a glove. The heated bed and fully enclosed space of the PolyPrinter, no doubt, are critical to printing large ABS components like this without lifting or warping.

The protrusion on the front/left of the sketchup screenshot is the bottom of a GoPro mount. There were several experiments around the GoPro in this build. In the upper place, I included a springy tab that retains the GoPro when inserted. No tools, no screws, just slide it in from the side. 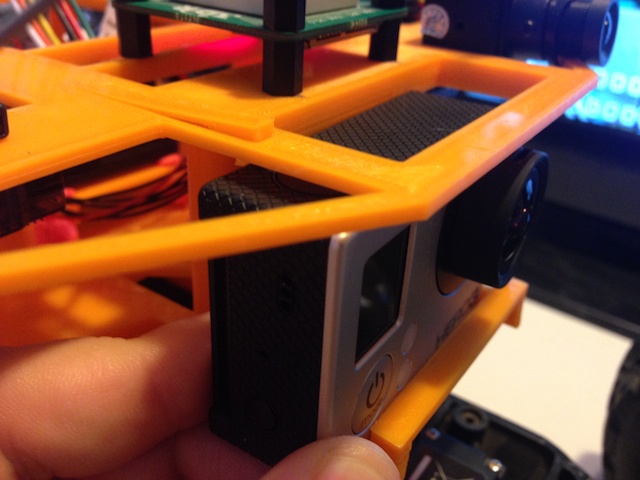 When it is fully inserted, the GoPro locks into place, but you can still operate all the controls, access all the ports, buttons, and see the all of the indicators.

It comes out easily, by pushing up on the tab and pulling it out sideways, but will not come loose while driving around, even under hard driving. The back is also open, allowing for GoPro accessories.

While this arrangement works well, I would not do it like this again, at least not on a rover. The lens gets far too dusty here in Texas, even with light duty. Because the rover is ground-based, weight is not as critical, so for future ground-based builds I will design around the supplied GoPro protective cases. For aerial systems I now use a variation of this arragement, with extra tolerances for a tiny bit of foam on the contact edges. This helps with vibration and gives a tighter fit overall.

Another minor, but nice, feature of this build, and easier to do in 3D printing than in transitional plate/cut fabrication can be seen for otherwise "hidden" components like the telemetry module. Measuring out where the TX/RX leds would be situated under the top plate, I sunk the plate down over that area so that it is just ~.25mm thick. 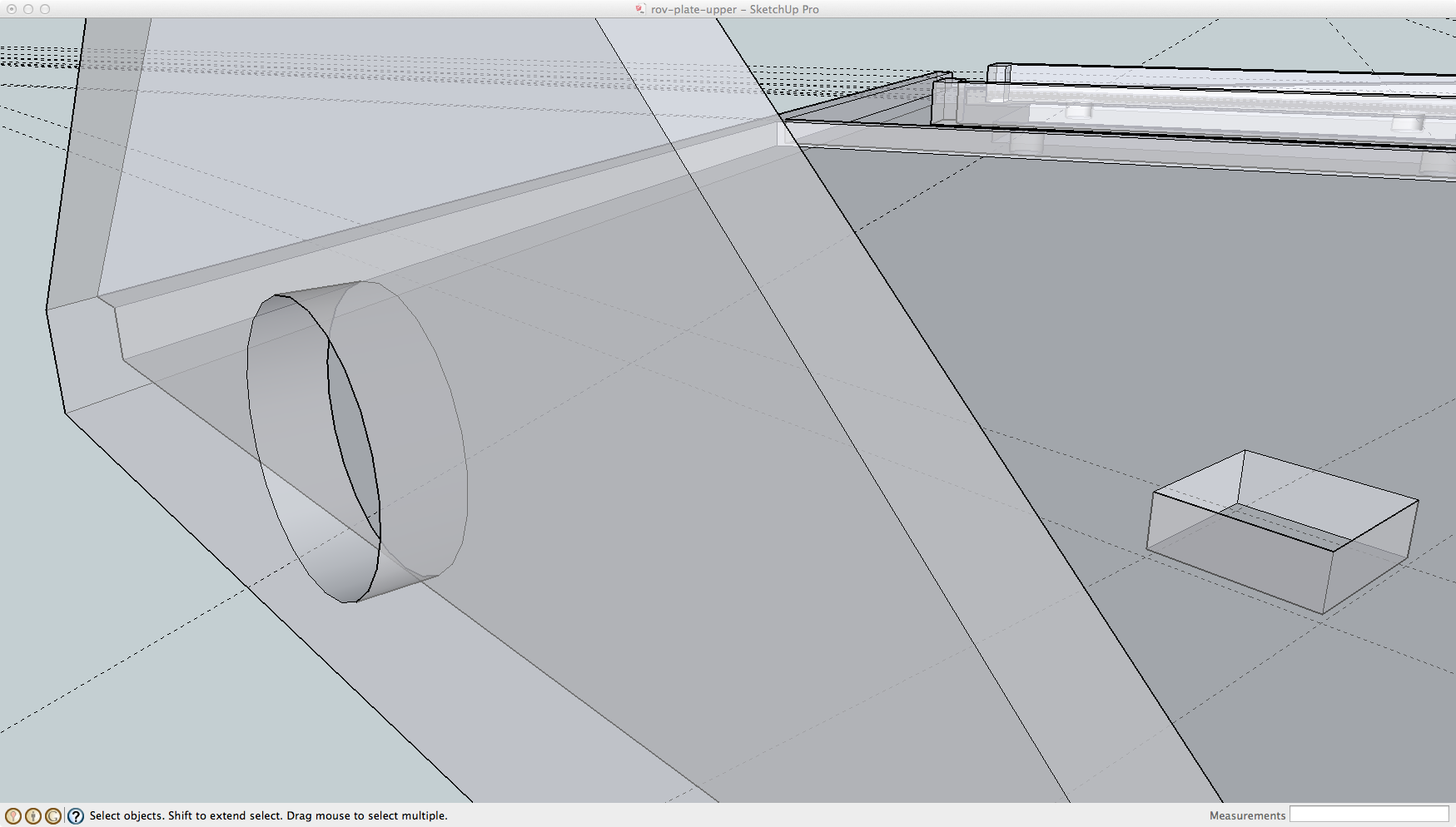 This creates an high quality effect similar to the hidden indicators found on Apple laptops. While I print in bright orange while prototyping and for my aerial components, I expect this effect would look even sharper when printed on black or some other dark color. Here is a shot of the top plate just as the 3DR telemetry radio LEDs light up. When it isn't lit, you just see orange, but it is so thin that when the LEDs light up, they stand out in the original LED colors. In future prints, I plan to fit the video and telemetry radios better, such that they do not twist at all when installed, but otherwise I'm very happy with how they work.

I don't use the power module in this build. The rover chassis is powered on 7.2v 6 cell NiMH battery. To use the power module, I'd probably swap out to one of my in-inventory 3S lipos, but that would lead me to replacing the existing ESC and motor while I'm at it, so I've left it alone for now.

There are a dozen or so other ideas expressed in this build, but I've hit the limit on embedded/uploaded images in a blog post, so I'll call this the end for now. My dialog is boring enough with the images, I will not subject anyone to my text sans photos. Happy hacking.