I'm starting a new project branch for the ArduPilot, and I hope it will thrive. For an experiment run the DroidPlannerv0.1b.apk file on an Android Tablet (needs android v4) . Here it's a mere screenshot: 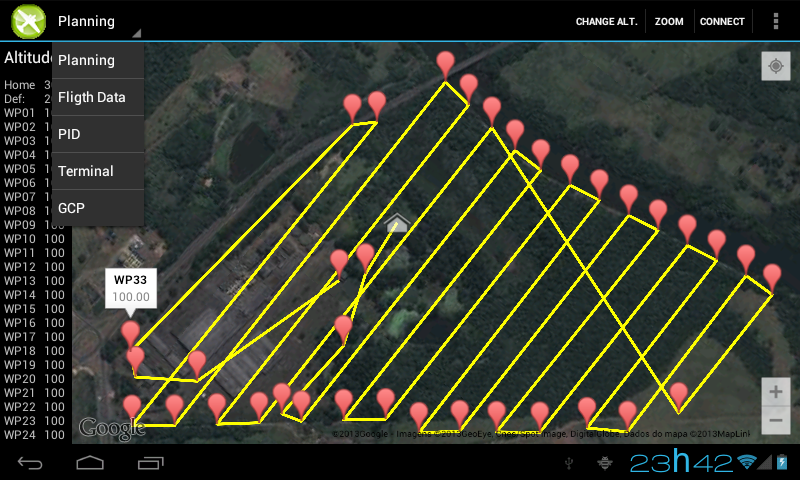 I know this it's not the first phone/tablet GCS to show up on this community (for example Bart copter-gcs, this closed-source copy, the Apple GCS by  Zachary), but I'm thinking in a different approach. This is what I want to do:

Some great things are helping on this project:

Before getting into how I think this should evolve let me show to you what I have already done. Bellow is a screenshot of the home screen where the mission planning is made. On the left there is a list of waypoints altitudes, on the center a map with the home position. On the top left a menu to change the screen and on the right some commands relative to this screen. 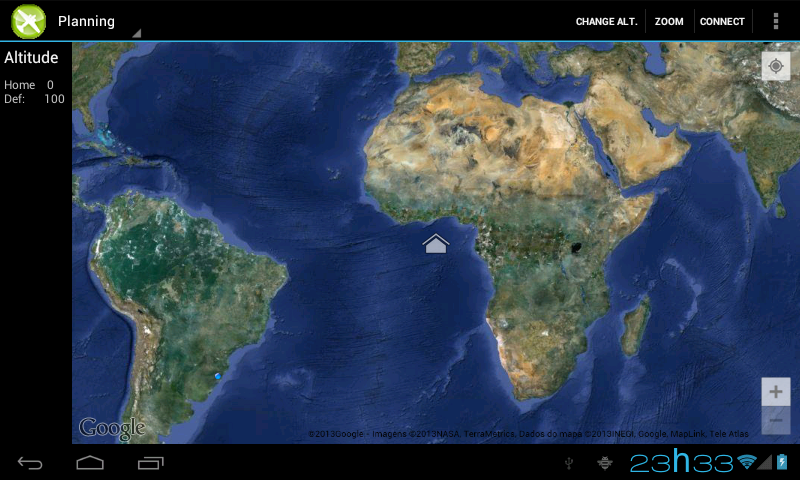 On the next picture there are show some of the actions on the menu, and more waypoints where added (with a different altitude). Using the "open file" action to open a real flight get's us back to the first picture in the post. (Files are loaded from a folder named waypoints on the sdcard, you can copy files generated with mission planner to this folder) 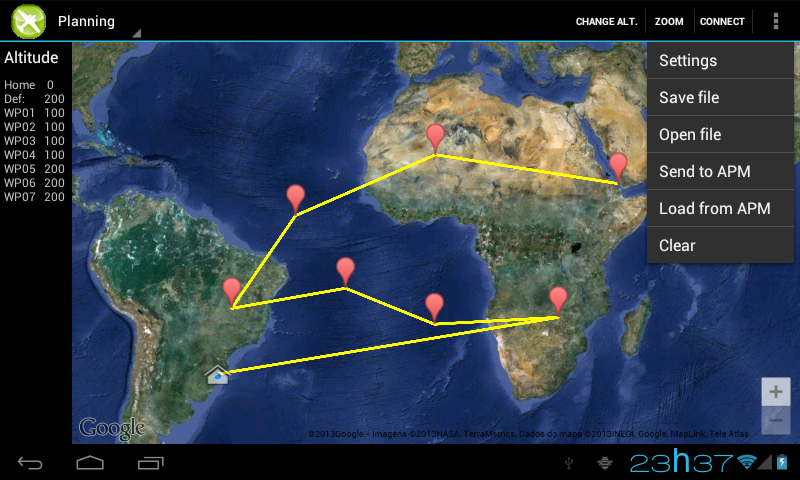 Edit: I added one more screen to the DroidPlanner App, is the Ground Control Point (GCP) screen. It's function is aid in the positioning of control points on the field for photogrammetry applications.

The operation is simple:

Here is a screenshot of the GCP screen with a KMZ file just loaded. And this is after some GCP have been placed on the field and have been marked; How it think it should evolve:

The part I'm procrastinating is the communication interface (mainly because Bart has made it already). I want to implement first a wifi-UDP communication system redirected by some main GCS, this way the development will be easier (the USB port will be free for the programmer) and a nice mobile GCS will be left behind. Next the USB-serial-Xbee communication, I have some working demos to receive data from the serial port but these need more study.

First get a clone from my branch "DroidPlanner_Stable" at this link. Next download the ADT Bundle for the google SDK and eclipse. Download and import the Google Play library into Eclipse as explained here. Now you should be able to import the DroidPlanner project/compile/ and run on a android device (needs Android v4).

Edit: About the USB connection to 3DR radios, some tablets have USB host capabilities and the drivers needed to communicate to a FTDI CDC IC.This means the device can supply power via USB and Acess USB devices, for me all it takes is an USB microB to USB type A cable (like the one in the picture).

To decrease the doubts about this here is a screenshot of my tablet connected to an APM1 board accessing the APM terminal. I used a terminal app called "Android USB Serial Monitor". As I pointed out at the start there is this file: DroidPlannerv0.1b.apk, that can be run on a android v4 phone or tablet.

Edit: I only have one Chinese 7 inch Tablet, so I don't know how it will behave on other devices but it's worth a try. Some has run the App on a Nexus7. I had some doubts because of the API key need to access Google maps data was a debug one.

Edit: There seams to be a lot of questions about v2 android devices, these will not be supported. At least not on the initial releases. Because with android 2.X there would be some problems with the Google Maps API v2, and the communication drivers (since USB host mode is supported only on version>v3 devices). I know it would be great to support everyone but that is a lot of work. I think at least for the start just focus on android 3.1 or higher. this way we can use the latest version of the maps API and have USB support.

And an android v4 Tablet is very cheap now, and that's what I think should be targeted.