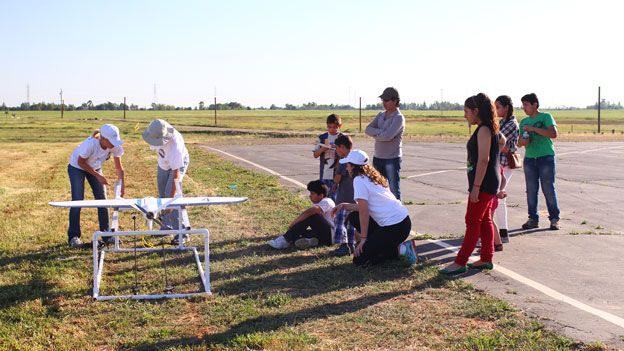 Interesting idea, small deliveries adding up where large ones would be shot down.  These are Pixhawk-powered fixed-wing UAVs.

How do you deliver food and medicine to people in an area where a cargo plane would be shot down? It was a question that kept US Air Force pilot Mark Jacobsen awake at night after he met Syrian refugees in Turkey. Then he had an idea - a swarm of tiny drones, each delivering 1kg or 2kg at a time.

On an airfield in Sacramento a group of aircraft enthusiasts make noisy toy helicopters perform stunts in the air. US army vehicles sit nearby. It's a baking hot California afternoon, everyone is wearing caps and chasing children to smear sun cream on them as they stare up at the sky.

But next to the regulars is another group, testing custom-built drones. They catapult them into the air at regular intervals and make them circle repeatedly for kilometre after kilometre.

There is something different about this crowd. Along with the drone-flying geeks and their computers are Syrian and Iraqi refugees, girls in hijabs and an injured man in a wheelchair, who has only recently landed in California from Iraq.

And then their aircraft are all in the same colours - red, black, green and white.

The reason? These drones are made to fly into Syria, carrying vital aid to people in towns and villages besieged and deliberately deprived of food and medicine by one or other of the warring groups.

It's the deeply personal project of 33-year-old Mark Jacobsen, whose meeting with refugees in Turkey 13 months ago was nothing short of life-changing.

"What I experienced there is more real to me than almost anything else," he says, pausing for a drink of water and to allow a choking wave of emotion to pass..

"I just think a lot of people go through their daily lives not really thinking about what they're doing. And being over there and seeing this really epic struggle - doctors risking their lives to smuggle medical supplies, stories of people who were literally watching their children starve to death - coming back from that, nothing seemed important."

The goal of this project is huge - "to end starvation and medical deprivation as weapons of war". The concept of "swarming airlift", if it works, is one that can potentially be used not only in Syria but anywhere a transport aircraft - such as the C-17 Jacobsen flies for the US Air Force - would be at risk from anti-aircraft fire.

Unlike a big expensive drone, these little drones would be barely worth shooting down - and if they were, they could be quickly and cheaply replaced.

What Mark and his team eventually want to achieve is a conveyer belt of drones, taking off from Turkey, flying into Syria under cover of darkness and parachuting small boxes of aid at GPS co-ordinates agreed with contacts on the ground.

Then they want the drones return and do it all again. It's been called the Syrian Airlift Project.

For this testing weekend Mark's small house on the campus of Stanford University - where he is taking time off from the Air Force to study for a PhD in political science - is covered in planes. They're on the bookshelf, on the bed, there's a glue gun on the floor, and here and there a spare wing.

He wears a T-shirt with the project logo - which, for neutrality, combines the flags of the Syrian rebels and the Assad government - and tells me that the test drones about to be launched carry a 1kg box of aid and can travel 60km. That's 30km into Syria, if launched from the Turkish border, and 30km back.

A larger drone is on the way. This will hold 2kg and travel 100km - far enough to make a round trip to Aleppo, which holds special significance for one of the team.

Ali, an engineering PhD student at Stanford, left the city to study in the US before the war, not knowing he wouldn't be able to return.

His father is still there, not far from Aleppo, though he doesn't know exactly where.

Ali avoided news coverage from Syria for some time - he says he was in denial about what was happening to his country. But then he started reading and watching reports from the country, and it hurt. 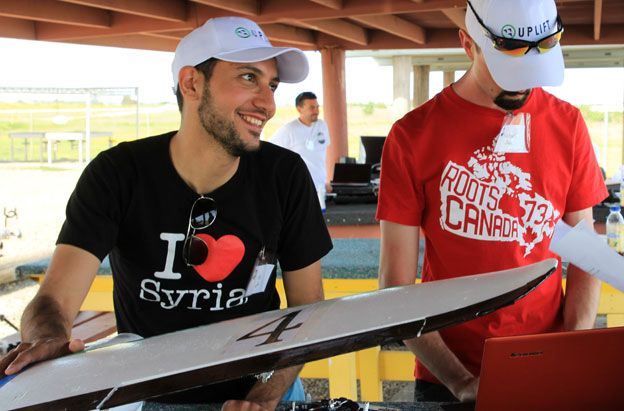 Ali (left): "I can imagine the happiness on the faces of the children"

In tears, he says he feels almost guilty being so far away from the conflict - but what they're doing in California does give him hope.

"The team I'm working with, there isn't a single word in English that can describe my gratitude, and I can't thank them enough for what we're doing," he says. "They're dedicating all this time and effort to help people and a country they've never been to. It's amazing."

The tiny aircraft are made out of simple materials - foam board, packing tape, and hot glue. The idea is that they will be assembled by Syrian refugees in Turkey, and decorated by Syrian children.

Even including the autopilot, battery and motor, each costs less than $500.

As they are relatively quiet, Jacobsen and his team are betting that few will be shot down if they fly at night. 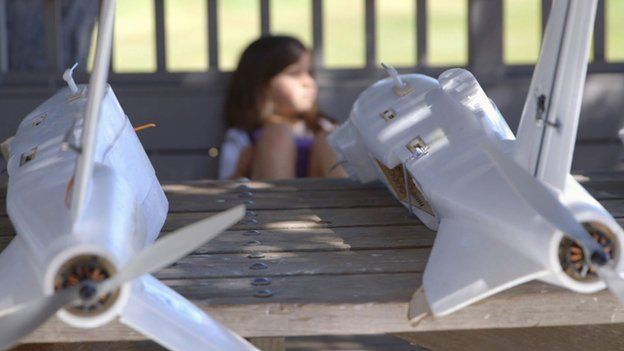 They are aware, though, that there will be huge concern about the possibility of the drones falling into the wrong hands and are working on features to disable them if they're lost.

"Isis has been using quad copters to take video. This type of technology has been used in the Ukraine for reconnaissance. This stuff has already been happening," says Jacobsen.

"The technology is already out there. It's not going away.

"The bad guys have it. We want to give it to the good guys."

After returning from his troubling meeting with the Syrian refugees in Turkey, Jacobsen and his collaborators set about fundraising, and developing software they have called Swarmify - a mission planning tool for dozens or hundreds of simultaneous flights.

The testing day at the Sacramento airfield demonstrates, among other things, that the drones can be launched quickly - the idea is to launch 30 an hour - and can be successfully tracked on a laptop. All land safely, and one is kept flying until it completes the full 60km. 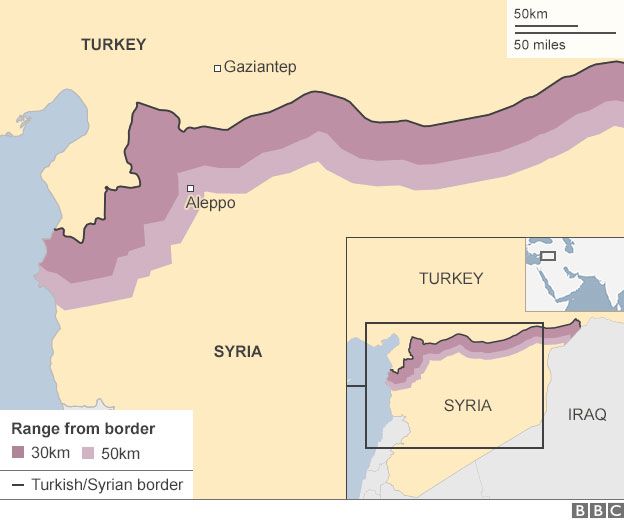 In Arabic, Ali explains the mechanics of the drones to two Iraqi boys who have fled Syria - and who nine years earlier had fled Iraq, the world's conflicts falling on their doorstep twice in succession.

As the sun begins to go down, the team tries out something they've all been dreaming about.

They gather the children on the concrete runway - Americans as well as Iraqis, Syrians and Palestinians who've been invited by the local refugee centre.

A drone launches and circles in the sky, but this time it flies lower than the others. A box drops, hanging from a parachute, and showers the waiting children with sweets. They hurry to grab a handful from the floor and quickly open the sticky wrappers.

The team are as happy as the kids. No-one has ever been this emotional over some Laffy Taffy. The empty box sits on the floor. It's been decorated by the younger refugees here, with the words: "Open for food and meds". It represents what the team wants to do in Syria. 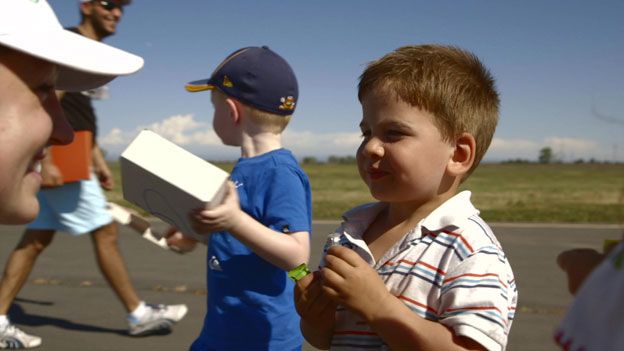 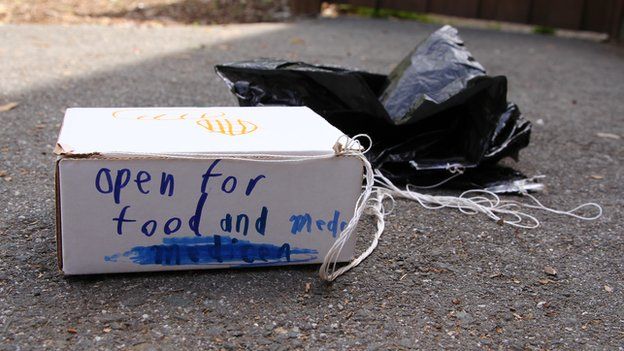 "I can imagine the happiness on the faces of the children," says Ali. "Dropping aid from the sky and being able to have medicine, or eat. It's just so, so beautiful."

Fingers are crossed that a bigger test will be possible in Turkey this summer. If that is successful the next challenge will be scaling up - getting more funding and making more drones. A four-man team of refugees should be able to make 10 per day, the team thinks.

But the biggest challenges may be legal.

Exporting drones from the US to a war zone has to be done carefully, in compliance with US law. Launching them in Turkey, then flying them across an international border and back again, also raises delicate legal issues. The consent of the Turkish government will be critical.

The team's law specialist has 12 folders, each of which contains papers documenting the progress made on the 12 core legal obstacles she has identified.

But as Jacobsen sees it, failure is not an option - it hasn't been since his first meeting with the Syrian refugees.

"This project has made me feel more alive than any time in my life," he says, "because I really think it matters…

"It's not just a few aeroplanes. This is a movement."