PID loops can be pretty confusing when you're first getting started with autopilots.

Here's my attempt at explaining them "intuitively", i.e. with no math.

I'm working on plugging in a physics engine into the demo. Two more videos in this series are planned:

- Understanding the math behind PID controllers.

- Tuning PIDs (using the physics engine as a testbed)

Anyways, this is my first go at this.  I'll probably make a second attempt in the future, so any feedback is appreciated!

(update) thanks for all the feedback! I'm getting ready to start part 2 which will decipher the math and show the basic simplicity of PID loop programming.

Sounds like a plan! I am sure that it will be of great help to the new members who are unfamiliar with PID theory.

And, the old members that are unfamiliar with PID theory!

Good video, one less thing I have to wonder about. Look forward to your simulator to test actual values to get an idea  what they react like.

Thanks Mark! Looking forward to the next video. A link to this blog post can now be found here, and will be updated as more videos on this important topic are available.

Good explanation! If you're planning on doing an interactive version, perhaps doing something like Jason Shorts Flash demo for Cross Track error would be good. For those who aren't familiar with it, it can be found here.

Keep up the great work Mark!

I knew I saw it somewhere...  THIS entertaining explanation from a DIYD member in Portugal. Includes subtitles in English and Russian. More for the next mix!

This is a really great little intro to understanding PIDs and I have included it in the APMCopter tuning section of the Wiki here:

If you want it removed or you want any changes made, please let me know and I will be happy to accomodate.

This should probably also go in the Plane and Rover wikis as well, but not quite sure where yet.

And I am looking forward to including a link to your physics engine animation when it is available.

This is a topic not very well understood, often even by engineers and which is critical and central to our Autopilot.

Well done Mark! Keeping the discussion to one axis helps a great deal. I took control systems theory for my degree so being able to explain this without the math and calculus should help many in our community.

It reminds me of the old lunar lander games of the late 70's. 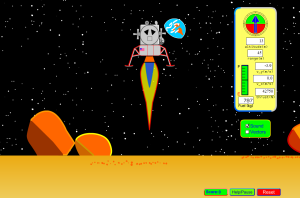 Would like to see part 2.  I am teaching a high school STEM UAV 101 class and I may show the class this video tomorrow as an intro into the PID / control loop discussion.  We have our FW450's almost ready to fly and need to get prepared for tuning.