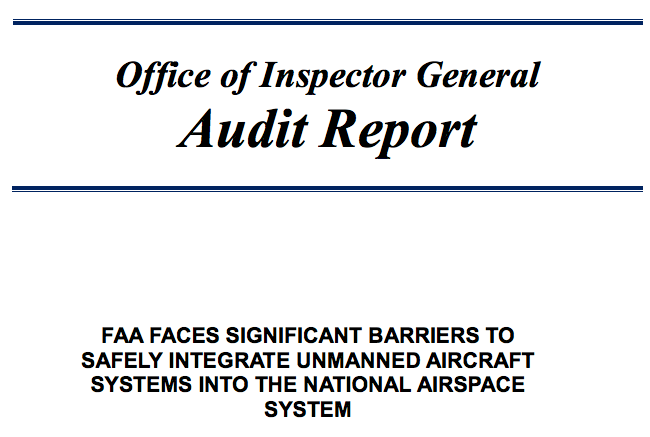 No surprise, but good to have it confirmed by the Inspector General. From The Verge:

The Federal Aviation Administration likely won't be ready to let commercial drones take to the skies in September 2015, despite a recent law directing it to do so, a government audit has found. The report, released last week by the Department of Transportation's inspector general's office, found that the FAA is "significantly behind schedule" and that there are still "significant technological, regulatory, and management barriers" preventing the FAA from integrating drones into the national airspace.

Those barriers include: failing to create standards that would allow drones to detect and avoid other aircraft, as well as ensure reliable connections with their controllers; not yet determining regulatory requirements — such as certifications and air traffic procedures — for managing drones;  not ensuring that all issues with drones are reported and tracked; and generally remaining disorganized with regard to how it oversees drones. "Until FAA addresses these barriers," the report says, "[unmanned aerial vehicle] integration will continue to move at a slow pace, and safety risks will remain."

For its part, the FAA seems to accept the report, agreeing to all of the recommendations it makes in its conclusion. Those recommendations will have the agency publishing an annual report, beginning November 30th, detailing its work toward safe drone integration. They'll also have the agency setting up timelines and concrete goals for meeting many of the barriers that the DOT's inspector general identified. Even so, the report's conclusion isn't bright for the immediate future of drone use. "Until FAA is successful in establishing these standards and adhering to a comprehensive integration plan with other public and private stakeholders," the report reads, "it will remain unclear when, and if, FAA can meet its goals to safely integrate [unmanned aerial systems]."