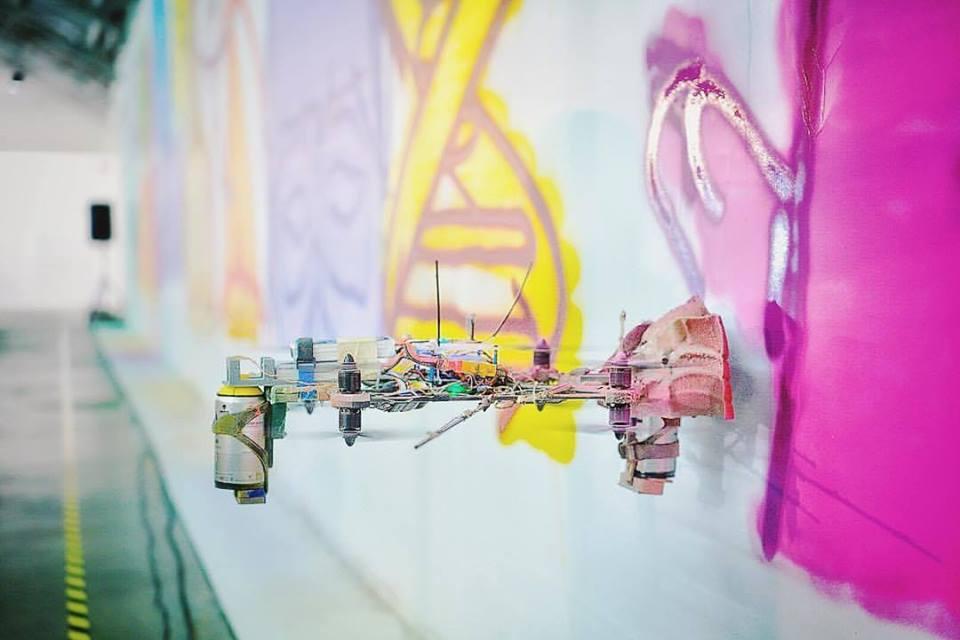 Graffiti drone - a project by Tsuru Robotics, implemented in association with Interactive Lab, has become a truly unique undertaking. If only because, no one before us, had designed the painter drone, with complete automatic control. The demonstration of this wonder took place in the Winzavod Center of Contemporary Art, in Moscow. Misha Most, the artist, was drawing on a computer, which prefigured drone’s trajectory.

It looked natural and spectacular. But, the creation of the graffiti drone, itself, required ingenious technological solutions. Here’s one of them:
The drone paints with spray paint. The common spray paint that you can find at any hardware store. When using spray paint, one can prevent his hands from getting soiled by putting on the gloves. Otherwise, you’ll have to wash and scrub your hands after each painting session. But you wouldn’t bathe a drone, would you?
The first few trials of the flying painter showed that it’s not very tidy. The air flows, coming from propellers, were almost sucking the spray in, and it poured down on the machine, profusely.
Long story short, we needed to come up with a constructive solution. And we did. How do people protect themselves from the rain? Obviously – with an umbrella. We integrated the umbrella principle into our graffiti drone. The spraying system was shielded by a screen that resembled the umbrella, lying on its side. This screen, thanks to its concave shape, was collecting flying splatter of paint, thus protecting the mechanisms of the drone.
Propellers were, of course, getting soiled, you can't help that, but it stayed clean long enough. Graffiti drone was carrying out two kinds of painting tasks, it outlined the contour first and then filled it in. When painting, the propellers needed cleaning after emptying every second spray can, when painting outline, they were able to last much longer.
The workload that our drone had to keep up with was huge – we planned to fill a 100-foot wall with paintings! And a bumpy wall at that, as was discovered upon closer examination. The wall was assembled from the slabs some of which did not line up. Usually, it wouldn’t stand out, but it affected the quality of the painting. How did we go about it?
The drone was set to paint not over the entire wall, but only over some parts 9 to 13 feet wide. At this range, the bumpiness of the wall did not matter. As soon as the part was calibrated, the drone would get to work. Upon finishing the part, “the artist” would move to the next one, following the pattern.
As mentioned above, we used the common spray paint. But the caps had to be modified. It turned out that they come in many types. The difference lied in the width of spray. We chose different caps for different tasks. When outlining, we needed a much thinner line, when painting, we needed it thicker. We had to go through dozens of caps till we found what would fit the best.
Still, even the best paint spray with a perfectly functional cap would spray with a slight delay. It took a split-second for the paint to reach the canvas, and it also took some time for spraying to stop. That almost imperceptible time lag often prevented us from getting 100% of accuracy. We solved that too. The drone was programmed in such a way that, when necessary, it pushed (and also let go of) the cap a bit earlier. Thus, the spray hit the mark, flawlessly, without leaving empty spots, or spraying beyond the outline.
This is only a fraction of problems, that’s been solved during the production of our graffiti drone. You’ll find more puzzling quirks and interesting solutions for further publications.