While the vast majority of drone projects seem focused on photography, video surveillance or acts of war – Direct Line insurance has been investing in new ways to use unmanned aerial vehicles to help preserve life in novel ways. KitGuru was invited to experience the Fleetlights project at Wrotham Park and to see, first hand, some of the innovative ideas that this open source project is developing.

Now presenting motor sports on the BT Sports channels, Suzi Perry will be familiar to KitGuru readers from the 8 years she spent presenting Gadget Show. Alongside the technical presentations, Suzi asked us to imagine travelling alone on a train at night to a station that’s far away from a town centre. It’s cold, dark and you don’t feel safe. How cool would it be if you could press an app on your phone and have a drone waiting for you when you get off the train?  The drone would follow you to your final destination, illuminating the way with powerful Fiilex AL250 spot lights, only leaving when you say that you are “Safe inside”.

In a more dramatic set of circumstances, imagine you were trapped somewhere but you knew that pressing a button on your phone would place a drone right above your position – with a light to direct rescue services. How useful might that be?

Seeing Fleetlights is much easier than explaining the technology in words, so we’ve created this video for you to watch via VIMEO (Below) or over on YouTube HERE.

Mark Evans is the marketing director for Direct Line and is the driving force for a series of technology initiatives that his company will be funding.

“Traditionally, we have been a ‘fixer’ company”, Mark told us. “We’re there after a customer has experienced a problem and it’s our job to help them recover. We wanted to kick off a series of new projects that use some of the latest technologies and then mash them together with the help of experts, to see if we can improve prevention – to help protect people from problems before they even happen”.

Next, we wanted to dive a little deeper into the technology itself. For that, we spoke with Simon Cam who calls himself a Technical Creative Partner. He originally studied design and art direction at university, but these days he’s focused on Python and Javascript across the full stack from front-end to back-end to server admin. 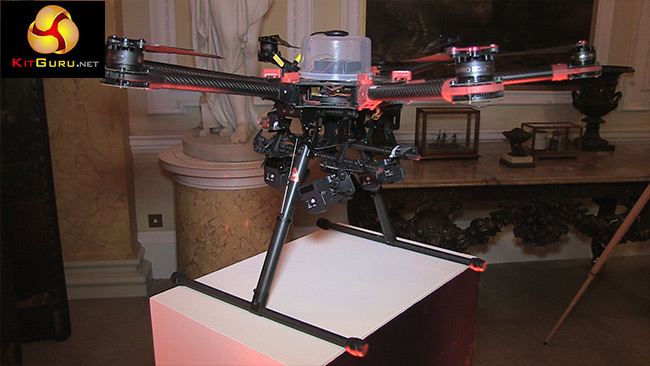 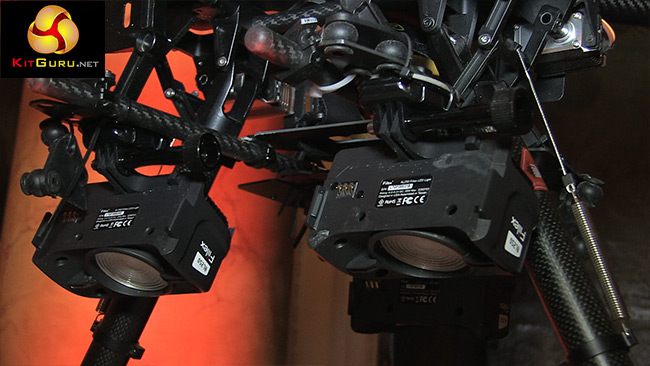 Simon explained that there were two key challenges for the Fleetlights project. First, increasing the accuracy of the GPS system and second to augment the available mapping/tracking software in the market – in order to create something very fast and responsive, that also allowed a group of drones to work as a team, using a mesh network that can be daisychained.

The demonstrations that KitGuru took part in involved a smartphone with advanced GPS ‘bunny ears’ attached. This attachment means that Fleetlights can operate to an accuracy of a few centimetres – rather than the 1-8 metres that most of today’s systems use. The system we used included RTK Reach units, but Simon was confident that this new generation of GPS accuracy will be normal in mobile phones very soon.

Fleetlights drones have advanced open source mapping technologies already built in, but they use them in a unique way. Routes are predicted in advance and the Fleetlights drone will actively lead you to your destination – so the intention is that you follow the lights. You can veer off the predicted path by up to 20 metres, but at a certain point the drone starts to ‘wonder’ if you’ve given the correct destination.

“We have successfully tracked a car at close to 50 miles per hour”, said Simon. “But there are a lot more improvements to come – including advanced collision detection and blue cell hydrogen power units – while at the same time we’ll need to work closely with any Civil Aviation Authority legislation that comes to pass for commercial drone projects”.

How the project will work commercially and which organisations will pick up on it first, is still to be decided. Mark explained, “We want to encourage the exploration of these new technologies – especially among students. There is no specific commercial goal in mind, we just want to encourage innovation in technologies that can help accident prevention”.

You can find out more about Fleetlights by visiting the site and downloading the technical manual here.

KitGuru says: At the start of the evening’s demonstrations, we were totally fixed on the commercial difficulties that would make it hard to deploy Fleetlights across the country. By the end, it became clearer that this kind of funding for a wide range of innovative projects is genius and very encouraging. As the software/tracking become more robust, the cost per unit drops and adoption of these technologies becomes more widespread – we could well reach a point where Fleetlights (and related projects) are dead easy to implement. For now, the idea is fascinating and we applaud the investment.